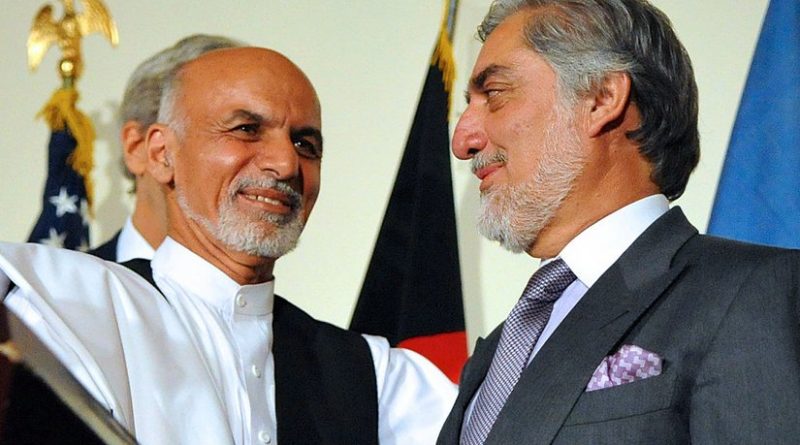 In 2014 Presidential elections, at least eight million voters had braved Taliban threats and gone to the polls in two rounds of elections. After a long dispute between the two rival teams led by Dr. Ashraf Ghani and Dr. Abdullah Abdullah, Afghanistan’s presidential election was resolved in a U.S.-brokered deal that created a National Unity Government (NUG), agreement signed on September 21, 2014.

The new president Ashraf Ghani, by decree, created the post of chief executive officer (CEO), filled by Abdullah Abdullah. This resulted in a power-sharing arrangement between the two teams, the formal legal parameters of which will not be decided until 2016.

In addition to its internal tensions, the NUG faces a challenging political, security, and economic situation in the country—one that threatens to be exacerbated as international assistance and U.S. military forces draw down. Although President Ghani was not pleased with forming a two-headed government that could divide his authority over the government institutions, in bringing the much-needed reforms and improvements in key departments and offices like that of the General Attorney, Supreme Court and local Governance.

In fact, the NUG which was given a 100-day deadline to perform the prioritized tasks in what can be addressed as its probationary period, this two-headed government embarrassedly failed to execute them, facing strong public criticism and international admonishments. What have been even more embarrassing are the criticisms that have followed the President into the public domain, with the CEO having asked Ghani to reconsider the appointment that he had made to the Ministry of Defense! Nothing could have undermined the strength of the NUG more than these demeaning internal quarrels.

The battle over key appointments extended to other institutions including local governance appointments. The NUG has had its first anniversary, but it is yet to have Ministers appointed to key ministries such as Defense, with some of the existing portfolio bearers being nothing more than acting executives, lacking full authority and consequently, evading full responsibility for their actions.

The internal disputes over power sharing have badly affected the private business sector resulting in creating a huge crisis of unemployment throughout the country. The majority of native investors have fled the country due to security threats that come from many quarters. The NUG, in all, has failed to deliver security and support to both the domestic and international investors alike.

While facing jobs crisis, a big number of educated and skilled youths are leaving the country every single day to find jobs and as well a secured future for their families in other countries. Initial reports confirm that approximately 80,000 skilled youths have already left the country. Providing a proof of this exodus is the Afghan Passport department. Since the draw-down of the ISAF, the department has been stretched to its maximum capacity, issuing as many as 7,000 passports for young and old alike.

Afghan peace talks have also lost their credibility after it was revealed that the supreme leader and the spiritual fountainhead of Taliban, Mullah Mohammad Omar, has been dead for as many 2 years now. Apart from dealing with Pakistan, what has disgruntled the Afghan domestic constituency even more is the sheer ignorance with which the NUG proceeded with the talks, not knowing who they were talking to and rather being bluffed all this while.

At the level of governance, the inception the Afghan government has not translated into full control over the country, particularly at the district level. Lately, the government lost Kunduz, one of the major cities of the country, to their longstanding foe as Taliban. A city of three million people fell into the hands of Taliban who were kept away from the province for 13 long years.

The country’s deep and broad political divisions and wounds, exacerbated by the presidential election are yet to be healed. In these circumstances, the Taliban renaissance and the increasingly apparent inadequacies of the Afghan security forces are likely to do further damage to Ghani’s leadership credentials.

The army by its retreat in the wake of the Kunduz attack has really shown that the government’s ability to enforce its writ has not been so effective. In fact, the leading positions in Kunduz were also a casualty of the power sharing deal that failed to administer from a sole command and control resulting in the falling of the city into the hands of longstanding-Taliban.

Tackling corruption was one of priority task for the NUG in order to earn public support and improve the chances of obtaining further international assistance, but this too has gone nowhere.

In order to put an end to the currently faced challenges -security, battling corruption and establishing good governance- I personally suggest the US should reconsider and review the brokered deal between the two teams ending with elimination of CEO position, as they have clogged the pipeline of administration more than making it functional. These will not only settle the quarrels and struggle for power, but this will also allow the elected President to issue his orders and approvals for merit based assignments for key officials in order to maintain good governance.

The President will be able to make decisions on his own consulting with team for economic initiatives and institutional reforms. This means that a number of structural obstacles in the agreement must be overcome and Afghan elites need to foster greater cooperation to begin the actual process of governing.

Under the constitution, the President is the head of state and government; it is the President who leads the cabinet. Power-sharing arrangements do not have a good-track record in Afghanistan’s recent history. One of the main factors in their failure has been the emergence of powerful patronage networks generated by decades of war and the involvement of outside supporters. These centers of authority disrupted the traditional conflict resolution mechanisms that the government formerly exercised, as well as the effectiveness of traditional informal authorities, including tribes, clergy, and tribal jirgas.

Given the failed experience of the past, what are the prospects for the current Afghan coalition to function effectively? Although political fragmentation and ethnic division continue to strongly influence domestic politics in Afghanistan, there are many compelling reasons for the government to mobilize to achieve national goals. The majority of international forces are leaving and future external financial and military assistance will hinge on Afghanistan’s commitment.

*Attaullah Waziri is the Director of Waziri Human Development Organization, Afghanistan. He can be reached at: [email protected]