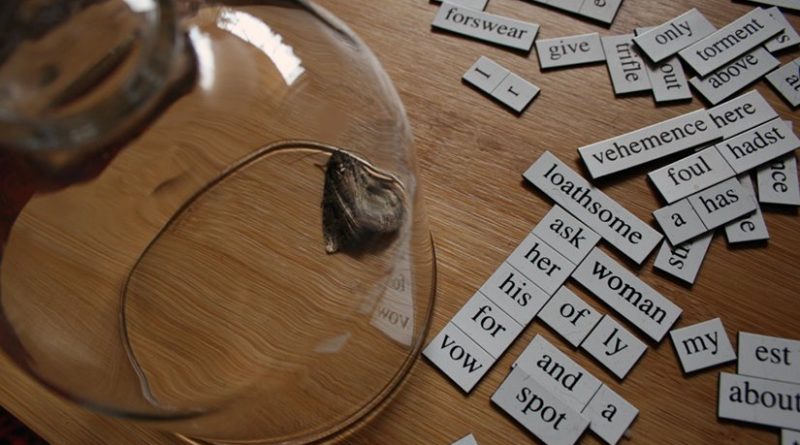 A poet always looks into invisible objects inside and outside of his existence. Then he discovers the world through the use of words, dreams, time, attraction, love, solitude, memory or metaphors while making the world more transparent and visible. In the infinite sky, Xhevdet Bajraj, a great Albanian poet who has crossed international borders, is looking for his shadow below the sky.

In the awakening, verses almost of a melancholic mood are born without any question marks; they flow just like matured apples, approached just like a fatherland, and are falling asleep over an extinguished cigar. In its smoke is freedom, poison, the hidden rays of the sun. There is also the poet, time and poetical space.

Earlier, I read poems written by Xhevdet Bajraj and was surprised. In their core, I discovered, that the author who comes from a small Albanian town, was writing more about the winter of his motherland, than the burning sunny summers of Mexico (where he currently lives).

As a result, Bajraj was submitted to poetry as much as he has been overwhelmed by peace, emotions, life and reality. Xhevdet Bajraj is a prophet in the art of words and makes all of us to speak with poetry, with the world, with time while creating his artistic space.

As he uses literary figures to share his verses, he gives them life and voice to communicate with men. The poet is looking only for a single path, right there where the verses meet, where inspiration is encountered, pain, and hope even when there is sorrow. This is why his poetry has the weight of the word, as the best ally of an artist. What makes Bajraj highly unique is that he is obedient to poetry, the same way as poetry is bowing to the poet. Each one has his own heritage.

During the night and day they have their sun and shade. In the morning a word is juxtaposed through the images of a human face, that person who is not missing anything, except the steps on earth where his soul is taken hostage. He leads a dialogue with verses while using the inner feeling to find the philosophical truth, against evil, or a monologue with him against human conflict.

While hating war, this free poet is in love with freedom. I have never accepted to compare a writer with another one similar to him, because from similarities no one can profit. Poets cannot solve the problems of the world, but they can create imaginations through the freedom of speech.

The true personality of this poet creates a parallel instability with the great world around human freedom. Here is what Bajraj is writing about in the poem: “In my song”: if you encounter a person in my song, in a sunny day, while drinking water in a river, with the knees over the stone, leave him alone, he was born free.

All poets have written songs to freedom, however with the earthly sounds that Bajraj is writing for is the absence of freedom in his genuine fatherland. Everyone sings to freedom based on his culture! Freedom has no space. It is infinite. Why is Bajraj remembering his fatherland? Well, because he is certainly missing it.

It seems that without a fatherland you cannot feel free. You may feel pain, experience illnesses, or go through winter nightmares. This becomes also a true painful gland. Let’s see again his verses. In the poem “The peak of solitude” the author writes: somewhere in foreign soil, in the name of freedom, run around the world, or in the poem: “A dance with a flute” the poet says: the river of blood came out of its bed, what a habit, someone lives every day, and I die every day!

In his poem “Peace”, Xhevdet Bajraj is annoyed by the evil done against freedom: expels the world from his room right after closing his window, I save the flag of Red and Black for my grave. A poet with universal culture with ideas and a style that is universal within the circuit of originality in his poetry he brings what is called today as the freedom of soul. Every verse of Bajraj has a metaphor.

Such a magic inspiration with a deep sentiment, with the power of words, makes his verses to be covered by a wind of love meaning which make us to consider this poet, a great value to Albanian poetry. As I read with emotions his poetry “Somewhere Beyond the Ocean,” I ask myself: why the handkerchief of pain follows the Sun and the dove is descending over the grave stone, as a vivid piece of mud, where somewhere beyond the ocean, a man is crying in Albanian.

How distinctive is the greatness of the poet in this meditational poetry covered by metaphors! Who would cry besides a well-talented poet? Aren’t there dreams, doves, cemeteries, poetical symbols for the poet even though he only dreams in Albanian? Why is the dream turning into verses for a piece named Albania? Isn’t there Xhevdet Bajraj a poet who is inspired by his fatherland and who always prays in Albanian? Isn’t there the poetry of Bajraj filled with surrealist reflexes?

I have also thought about this! He writes about the dreams of Albanian men, the same as he writes for the world, since his poetical soil is praying for peace! The writer has won the fight with poetry while filling it up with life. The universal uniqueness of creative spectrum is penetrated by deep messages where emotions and perception are dedicated to a lifelong dreamer of human soul. In his creative profile are shaped through philosophical ideas, the artistic talent and poetical identity.

It is the message that comes from the language of soul which is the language of all poems that are impressive with their expression and a vision of universal freedom which is in harmony with the energy of a writer through his free verses, structure and figurative language. The poetical theme that is sensitive for the common reader would make him a marvelous poet who would travel with the reader in the forefront of Albanian poetry and beyond.

Today he is without a doubt one of the best poets who has shaped his own unique artistic contours, a master of selected verse with the power of literary expression, with a deep affection and a lucid Albanian language that breaths and brings poetical sounds. He turns a dream into a poetical hymn. Here is a poem that has remained in my memory “Dreams”: sheltered in a silver cave, licking the wounds under the shadow of memories, o God, pardon me for dreaming this much, love was far away, and life was too short.

He turns into hope and infinite light the sensitive and radiating feeling, the pretty and pain as an aesthetical value that breathes. To make this through the verses is an action that goes beyond the art and even humanism. It is equally significant as to the invasion of the world and men with love instead of war. This can only be done by a unique poet that has invaded all of us while dreaming and singing in Albanian language amid such a great universe of poetry.

*Violeta Allmuça, is a renowned Albanian writer, she was born in Dibër, Albania. Studied at the University of Tirana and graduated in 1991. She is a poet, journalist, author and literary critic. Is the author of four novels, two volumes of poetry and a book with essays on Kosovo published in English and Italian in 1999. The poems of Violeta Allmuça are published in various international magazines in Italian and English languages.

Home » The Unique Voice Of Poet Xhevdet Bajraj: Author Of ‘My Piece Of The Sky’