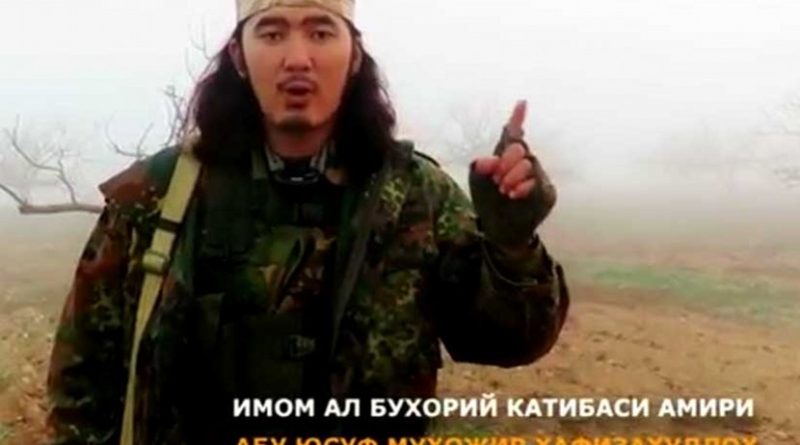 On February 15, 2017 the Uzbek jihadist group of Katibat Imamal Bukhari from Central Asia, also known as the Imam Bukhari Jamaat, issued a special statement titled “Who are we?” The statement was published by the group leader, Abu Yusuf Muhojir, on his page on Telegram, which then was distributed via other social media among other Central Asian terrorist groups in the Middle East.

The statement clearly emphasized the extremist doctrine of the jihadist group and strategic targets set forth by Katiba tImamal Bukhari. For the full disclosure of the radical ideology of the group and its jihadist platform, we have analyzed the statement which, in our opinion, poses a serious threat not only to the integrity of the Islamic Ummah, but also to other world religions such as Christianity and Judaism.

The statement focuses on the issue of jihad and the commitment to wage a war against “infidel forces” of the West. The statement starts, as it usually does among radical Islamists, with the expression of endless love to Allah and his messenger Prophet Muhammad. Then it says, that “Rasulullah Sallallahu Alaihi Wasallam (Prophet Muhammad) said that on the way to Allah you should choose jihad since Allah opens one of the gates to heaven only to those who follow jihad and give their lives in the name of Allah.”

The statement gives a brief description of the Katibat Imamal Bukhari group. That’s possibly why the statement is called “Who are we?”According to the statement, “the Katibat Imama lBukhari group consists of Muslims of Turkestan (an old name of Central Asia), who fought for the establishment of a Sharia regime in Fergana Valley, but due to religious views had to flee the repressions of kafir regimes. The Mujahideen of Katibat Imamal Bukhari have come to the land of milk and honey of Sham (Syria) following the call of Allah to help the suppressed Muslims of the Middle East to overthrow the infidel regimes and strengthen the Islamic laws in the liberated territories.”

In the statement, Katibat Imam al Bukhari has described its the main religious concept as “a jihadist one based on the Quran and Sunnah’s of the Prophet Muhammad [Sallallahu Alaihi Wasallam].” Also, the statement says that “the strategic position of Katibat Imam al Bukhari is to establish the Islamic state in Syria and in the homeland of Turkestan (Central Asian states), where people would live and obey the laws of Allah. And only when the group achieves its goals, Allah would be pleased with the determination and faithfulness of his servants.”

Also, Katibat Imamal Bukhari has identified its foreign policy priorities, which is the evidence of the international “ambition” of the jihadist group. In particular, the ideologists of the group find it necessary to establish a contact with the outer world and to cooperate with other Islamic jamaats on the basis of the Muslim brotherhood only.

The final part of the statement sets a task for the Mujahideen of Katibat Imam al Bukhari to be prepared to protect the Islamic values from the attacks of the Western crusaders and their hostile religions. The followers of Salafism and Takfirism are known to consider the Christianity and Judaism as the archenemy of Islam.

“In case of conflicts with other Islamic jamaats within the Muslim Ummah, they should follow the principles of mutual understanding and mutual forgiveness”, said the statement. In conclusion, the statement has noted that all decisions on foreign affairs and military issues are made by the Shura (Council) of Katibat Imam al Bukhari.

Analysis of the statement showed that the main goal of Katibat Imam al Bukhari is the armed struggle against the secular regimes of Central Asia and the overthrow of Bashar Assad’s power in Syria. Jihad is the main tool of the group, which tries to establish Sharia laws in society and in the state. In other words, Katibat Imam al Bukhari leads a jihad for the establishment of the Caliphate, which poses a serious threat not only to the countries of Central Asia, but also to the West. The group recently joined the jihad against the US on the Jerusalem issue. The leader of Katibat al-Imam Bukhari, Abu Yusuf Muhojir, posted on his Telegram page a call for the protection of the Palestinians and for jihad against the godless regimes of Western countries, and for the Muslims of Central Asia to join the jihad as the only way to resist the aggression of the US and its Zionist allies.

However, the “novelty” in its ideological doctrine is the group’s desire to establish international cooperation with other Islamic jamaats and jihadist groups based on the Muslim brotherhood. In this way, Katibat Imam al Bukhari is trying to become a serious participant in the jihadist movement in the world.

After the murder of the former leader, the group’s jihadists lost their morale. On April 27, 2017, during the evening prayer in the mosque of a Syrian city of Idlib, the leader of Katibat al-Imam Bukhari Sheikh Salahuddin was killed based on orders from Al Baghdadi by an Uzbek militant from South Tajikistan, who was a member of ISIS. The Islamic State distributed the following statement via Telegram messenger in this regard, “The emir of detachment of the Katibat al-Imam Bukhari, Sheikh Salahuddin, was punished according to Sharia law for all the betrayals he committed.”But the overthrow of ISIS played into their hands.

The Uzbek militant from Tajikistan, known as Abu Yusuf Muhojir, was appointed the new leader of the group. The social networks have characterized him as a military strategist who has lead a series of successful operations against the army of Bashar Assad. From his video messages posted on YouTube it may be concluded that Abu Yusuf Muhojir has religious knowledge, oratorical skills, and leadership skills required in order to inspire the militants to perform holy jihad. About 600 militants are known to fight in the Katibat al-Imam Bukhari group together with their families, and unlike pro-ISIS’ militants from Central Asia, the group has managed to survive and maintain its combat effectiveness.