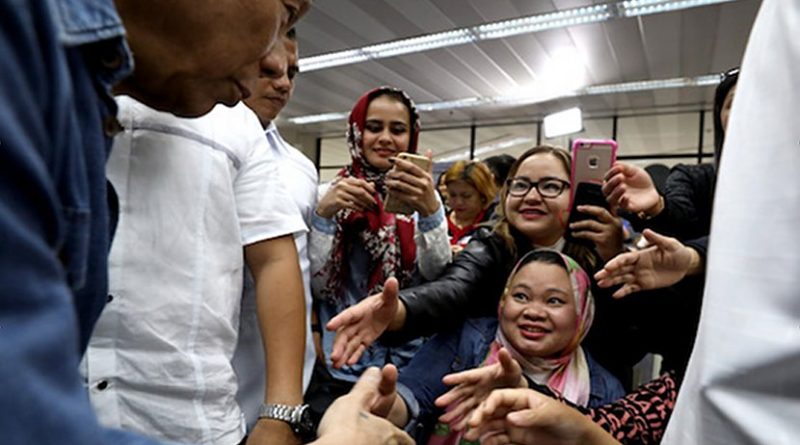 Since his election into office, President Rodrigo Duterte has reiterated his administration’s pursuit of an independent Philippine foreign policy, veering away from a longstanding American military and economic alliance and gravitating towards strengthening Asian trade and investment links, particularly with China and Russia. An example of strengthening those links is the signing of the Six-Year Development Program for Trade and Economic Cooperation with China, intended to serve as a framework for more economic agreements. A similar deal with Russia, along with a defense cooperation agreement, was also signed during the President’s state visit to the country last May.

This calibration has opened communication lines with non-traditional partners. For the Philippines, relations with China present a substantial economic opportunity requiring strategic engagement.  Meanwhile, the Philippines’ rekindled relations with Russia is rooted in the desire to branch out beyond traditional alliances.  Manila’s moves to strengthen cordial and cooperative relations with Beijing and Moscow signify efforts to manage realities, open new opportunities, and improve the country’s capacities.

Given the reawakening of bilateral relations with Russia and China, could the two countries be catalysts for developing Philippines-Central Asia relations? Russia and China are critical nexus in understanding contemporary regional and global dynamics. Besides being perceived as major challengers to the global leadership order, the two countries are gateways to Central Asian states (Kazakhstan, Kyrgyzstan, Tajikistan, Turkmenistan, and Uzbekistan) through economics, politico-security, and linked history and culture.

Central Asia is a crucial hinge of Oriental vitality and Western technological advancement due to its strategic position as crossroads of Europe and Asia. Trade between Asia and Europe has historically traversed through Central Asia via the Silk Road, making the region perfectly placed to satisfy West and East demands. Central Asia hosts a vast amount of hydrocarbon reserves, transit routes, and oil and gas pipelines, attracting energy infrastructure investments from European, American, and Asian companies. The region is also home to thousands of Filipino professionals in medical, business, construction, and academic fields. Enhancing relations with Central Asia may thus serve as an alternative to promoting and protecting Philippine interests and contribute to the overall balance of power.

Understanding China and Russia’s influence over the region

Akin to the Philippines, the economic future of Central Asia is increasingly shaped by China, whose energy interest in the region is clear as it is great.  In 2016, China imported 25.6 billion cubic meters of natural gas from Turkmenistan and 3.8 million from Uzbekistan. Chinese imports of Kazakh domestic gas this year could potentially reach 48.1 billion cubic meters. With Kazakhstan serving as a node for oil and gas to China, it is assured of its key role in the region’s energy landscape. Through financing oil refinery facilities in Kyrgyzstan and Tajikistan, China expands its foothold in the region. Chinese presence in Central Asia is evident in terms of overall trade.* Central Asia’s positive trade balance with China decreased at an estimated value of USD4 million from 2014 to 2016 – a boon for the Chinese economy should the trend continue. This figure falls behind Central Asia’s negative trade balance with Russia, which increased at an estimated cost of USD 5 million from 2014 to 2016 – a benefit to the region’s economy.

With a fast-growing economy, expanding pool of labor and capital, and low-cost production base, China provides Central Asia with a potential of resources and opportunities. The growing significance of Central Asia to China is highlighted by the Belt and Road Initiative (BRI), the overarching project through which Beijing will engage the region. Given China’s immense economic interest in Central Asia, it is expected that Beijing will be more concerned in the implementation of the BRI.

China could also utilize its economic power as political leverage. As Kent Calder notes, Beijing’s interest in Central Asia is an assurance against energy security threats in the Middle East and Africa. Malika Tukmadiyeva likewise points out that Beijing’s energy diplomacy in Central Asia is an extension of Chinese domestic policy, which is to help quell external support for separatist movements in the Xinjiang province. China’s assertive energy policy in Central Asia, then, would be geared towards granting itself greater influence over the region.

While China ventures economically into Central Asia, Russia continues to maintain a “sphere of influence” in the five former Soviet republics. For instance, Russia’s political influence is still apparent, with a majority of current and past Central Asian presidents having been Soviet-era officials and maintaining authoritarian regimes. Despite pursuing different development policies after independence, the five states’ economic structures are inherited from the Soviet Union. Economic development in Central Asia has historically been reliant on Russia, as main trade routes from the region lead to the country. In terms of culture, the Russian language remains the lingua franca in Central Asia, which also happens to be home to millions of ethnic Russians. Top-rated Russian television programs such as First Channel Eurasia and Channel One Russia continue to air and shape public opinion in the former Soviet states. The volume of internet users of Russian social networking sites such as V kontakte, Odnoklassniki, and Moi Mir have also overshadowed Facebook, YouTube and Twitter users in the region.

Russia’s relationship with Central Asia is notably more bilateral than regional in nature. Russia has varying policies adjusted for each Central Asian state, with Kazakhstan being regarded as a major regional partner; Tajikistan and Kyrgyzstan as parts of Russian security agenda; and Turkmenistan and Uzbekistan as parts of the Russian energy picture. Uzbekistan and Turkmenistan have weapons procurement deals with Russia. Kazakhstan, Kyrgyzstan, and Tajikistan host Russian military bases. Kyrgyzstan, Tajikistan, and Uzbekistan receive Russian aid, loans, and remittances.

Russia remains a prominent external power in Central Asia through its Soviet heritage; however, the disintegration of the Soviet Union and its ensuing effects have worked in China’s favor since it has been able to expand its economic leverage in the region. Some scholars view that the governing elites in the five Central Asian states lean toward the two major powers for support in sustaining their authoritarian regimes, in varying degrees, despite criticisms by liberal democracy advocates.

Takeaways for the Philippines

Central Asia’s vast energy reserves, geostrategic location, and rich history draw significant attention from China and Russia, two global powers with which the Philippines is expanding bilateral relations. On the one hand, China can potentially enhance regional economic activity. On the other hand, Russia maintains a strong historic and cultural connection with the region. Be that as it may, the five Central Asian countries would rather protect their newfound sovereignty and opt for constructive engagement with multiple actors than be dominated by any external power –  a foreign policy thrust it shares with the Philippines.

Understanding Russia’s enduring politico-security, economic, and historic-cultural influence in, as well as China’s economic link with, Central Asia may provide possible pointers on how the Philippines may utilize these connections in fostering relations with the region. In the context of pursuing an independent foreign policy, a successful relationship with these great powers may pave the way for opening up more non-traditional partners in Asia. The degree to which the Philippines’ relations with Russia and China may lead to engagement with Central Asia merits further study.

* Values were computed by the author based on trade balance figures of each Central Asian state with China and Russia, in yearly time series, retrieved from trademap.org.

About the author:
*Lloyd Alexander M. Adducul is a Foreign Affairs Research Specialist with the Center for International Relations and Strategic Studies of the Foreign Service Institute. Mr. Adducul can be reached at [email protected] The views expressed in this publication are of the authors alone and do not reflect the official position of the Foreign Service Institute, the Department of Foreign Affairs and the Government of the Philippines.