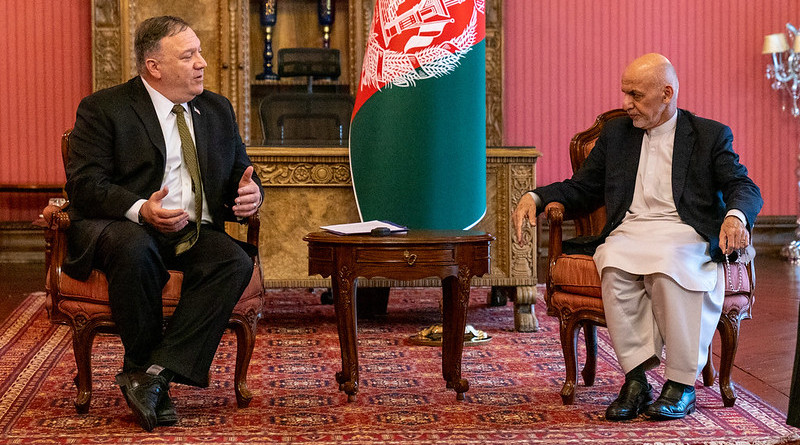 (RFE/RL) — U.S. Secretary of State Mike Pompeo has on March 23 met with Taliban leaders in Doha after an urgent visit to Kabul aimed at brokering an agreement between Afghanistan’s quarreling political leaders.

Pompeo went into a closed-door meeting with the Taliban’s chief negotiator, Mullah Baradar, and two other Taliban leaders at Qatar’s al-Udeid Air Base in Qatar after arriving from Kabul, State Department spokeswoman Morgan Ortagus said.

The meeting — the highest-level ever held between U.S. and Taliban representatives — was meant to press the Taliban to continue to comply with a peace deal the militant group signed with Washington in late February, Ortagus said.

But as Pompeo’s plane left Kabul late in the day, there was still no announcement on whether he was able to seal a deal between Ghani and Abdullah.

The Associated Press quoted reports from the Afghan capital that Pompeo had given Ghani and Abdullah until March 24 to come up with a compromise in their dispute over the country’s official presidential election results. But there was no indication either side had offered to compromise their position.

Pompeo was hoping to advance progress on a peace deal signed on February 29 by U.S. negotiators and the Taliban that could lead to the withdrawal of all foreign troops from Afghanistan and an end to the country’s 18-year conflict.

Since the signing of the deal with the Taliban, the peace process has ground to a halt amid political turmoil, with both Ghani and Abdullah arguing they’d won the presidency through a contested election in September.