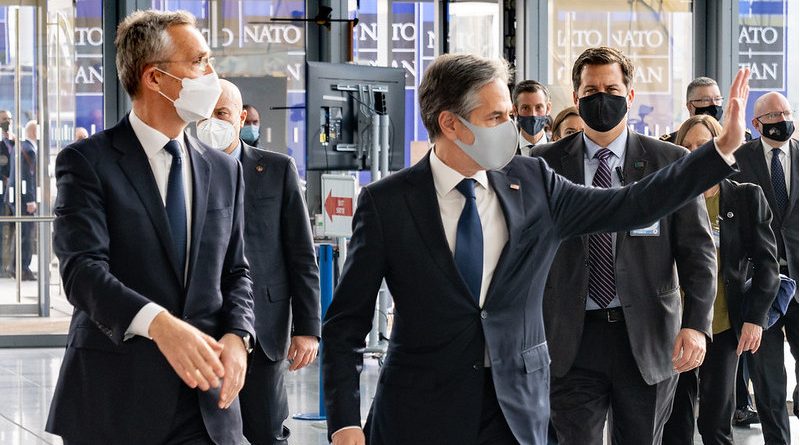 (EurActiv) — US Secretary of State Anthony Blinken has been eagerly awaited in Brussels with allies hoping to rebuild transatlantic ties after Donald Trump’s departure from the White House. EURACTIV spoke to the Chargé d’Affaires of the US Mission to NATO ahead of the visit.

Blinken is paying a visit to Brussels on Tuesday and Wednesday (23-24 March) to attend a meeting of NATO foreign ministers, taking place in person for the first time since November 2019.

The meetings in Brussels are meant to “underscore the Biden administration’s determination to strengthen the transatlantic alliance and reinvigorate our ties with allies through NATO,” the State Department said.

For Blinken, the State Department said his trip to Belgium is aimed at boosting ties with NATO allies and partnering on issues such as NATO reform, climate change, Russia and China as well as regional hotbeds of tension.

High on the agenda for NATO is the future of the alliance’s 9,600-strong mission in Afghanistan, after Trump struck a deal with the Taliban to withdraw troops by 1 May.

Allies are waiting for Biden to reveal whether the US is sticking to that date, although no concrete announcement is expected from Blinken at this stage.

Blinken’s itinerary in Brussels also includes a meeting with European Commission President Ursula von der Leyen and EU’s chief diplomat Josep Borrell ahead of a summit later this week on Thursday, where EU leaders are set to discuss the EU’s Russia strategy and the bloc’s complicated relations Turkey.

“The message will be to all allies that the US greatly values NATO, and that we will seek to use NATO, increasingly, both as a forum where we consult and talk, and where we decide on a common way forward,” Douglas Jones, Chargé d’Affaires of the US Mission to NATO, told EURACTIV ahead of the meeting.

Significantly, the US official specifically avoided criticism of European allies.

Asked what message the US will send to those countries that have been comfortable with relations under the Trump administration, including Poland, Hungary and Turkey, he said the US “will be looking to increase both the way in which we consult here as allies at NATO, and the way in which we can take common action together.”

In Brussels, Blinken is set to bilaterally meet Turkish Minister of Foreign Affairs Mevlüt Çavuşoğlu, amid heated exchanges between the two countries on issues ranging from regional considerations to Ankara’s decision to leave a landmark treaty on violence against women.

Washington has repeatedly expressed concerns about NATO ally Turkey purchasing Russian-made S-400 missile defence systems and its activism in the Eastern Mediterranean which has infuriated Greece.

Turkish President Recep Tayyip Erdoğan last Friday slammed US President Joe Biden for calling his Russian counterpart Vladimir Putin a “killer”. In the last year, Turkey and Russia, who have fought several wars in their imperial past, have aligned some of their positions.

Erdoğan and Biden haven’t spoken since the latter took office in January.

Asked whether NATO should be looking for some kind of strong statement denouncing the Turkish attitude, Jones said that Washington’s position towards “Turkey as a valued ally” would “remains clear”.

“The presence of sophisticated large Russian weapon systems such as the S-400 has no place in the NATO alliance, and it also contravenes the commitments that allies made to each other, that we would wean off of dependency on Russian systems,” he said.

At the same time, asked what the US is expecting from allies like Germany that don’t necessarily fully align with some of US priorities like Nord Stream 2, Jones said that talks will continue on “ways to handle this problem and importantly, ensure energy security for Europe”.

“We are very clear-eyed about Russia and the threat from Russia, and we’ve seen increasingly aggressive and coercive behaviour,” Jones said.

Asked whether he felt comfortable with Moscow’s vaccines diplomacy and Europe allies’ increasing willingness to use Sputnik V,  Jones said it would be “hard to comment on the validity of that particular vaccine”.

Washington is also keen to enlist Brussels in a united front of democracies against the rising power of Beijing.

“The US believes that China is one of the greatest geopolitical tests of the 21st century and NATO needs to also adapt to this new era of strategic competition,” Jones said.

“We can look as NATO at ways that we can increase the resilience of allies individually, and also collectively against challenges like cyber, hybrid and threats against critical infrastructure, and many other ways, as we use NATO as a place where we can increasingly address the challenges that are posed by a rising China,” Jones said.

However, he did not want to comment on whether the European stance on a coordinated China policy on the one hand and Europeans moving forward with the controversial Chinese investment agreement on the other would pose a contradiction.