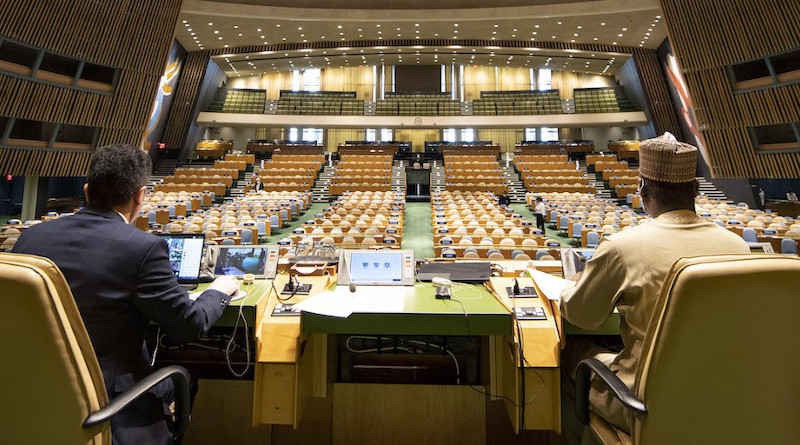 To influence global decisions, African states on the council must strive to present unified positions.

In January 2021, Kenya will replace South Africa as one of the three elected African members (A3) on the United Nations Security Council, joining Niger and Tunisia. Kenya was elected for the 2021-22 term, together with India, Ireland, Mexico and Norway.

Member states need to ensure the council’s responses to peace and security problems are relevant and effective. For Africa in particular, membership is an opportunity to showcase coherent leadership in the world’s most important decision-making organ.

Joining the Security Council isn’t an isolated act for any African member state, but rather part of an ongoing relay to ensure collective African interests are effectively addressed. In recent years, the A3 have shown that, when presenting unified positions, they are more influential on the council, especially on African matters.

African countries usually have their candidacy endorsed by the African Union (AU) summit. Historically this has been a fairly uncontroversial process. Based on continental rotation, South Africa’s replacement was due to come from East Africa. In August 2019, Kenya secured an endorsement by the AU’s Permanent Representatives Committee (PRC), the organ comprising all member state delegates to discuss day-to-day AU affairs.

Djibouti questioned Kenya’s legitimacy, claiming the AU couldn’t delegate its authority to the PRC on this matter and that it should have been approved by the AU Summit instead. During the summit in early 2020, member states couldn’t reach an agreement. From there an unusual and controversial campaign, the first among African countries since 2011, was undertaken by both countries.

Djibouti called on its links to the International Organisation of La Francophonie, the Organisation of Islamic Cooperation (OIC) and the Arab League. By questioning the AU’s endorsement process, it had important supporters from the UN Security Council permanent members, the P5 and France in particular.

Kenya engaged with a wide range of countries from the Commonwealth, Latin America, the Caribbean, Europe and the Pacific, often using the PRC endorsement as an entry point for its legitimacy argument. It seems this approach paid off.

Despite the controversy with Djibouti, Kenya comes to the council as a regional power that frequently champions peace and security initiatives in Africa. It previously served as the UN Peacebuilding Commission chair, and was a key African voice in the negotiations for the Sustainable Development Goals. Kenya’s success during its term will however be determined by how it crafts a relationship with the P5 and navigates complicated council dynamics.

During the campaign, both Kenya and Djibouti claimed they had China’s backing. China was expected to be more favourable to a Djibouti victory, being heavily influential in the Red Sea through its only overseas military base. However Kenya is also a relevant regional player, and a vital Chinese trading hub in Africa. So the extent of China’s influence in Kenya shouldn’t be underestimated.

France may be the biggest loser of this year’s council elections. In 2021, the European Union (EU) group will be reduced, with only three members – Estonia, France and Ireland – down from five in 2019. France’s ability to influence the A3 will be key. If Djibouti, a close French ally, had won, all the A3 would have been Francophonie members. Kenya’s position on the council won’t necessarily share French interests in Africa.

There are many lessons that Kenya can learn from previous A3 members on how to maximise its term. A Security Council analyst in New York told ISS Today that the sooner it completes its staffing process in New York, the better. When South Africa joined the council in 2019, it struggled to get its house in order in a timely manner, so it had a slow start.

Joining the council as an observer from October 2020 should give Kenya the chance to learn, practise and craft partnerships. It can identify the division of labour in its mission early on, and find ways to quickly and effectively develop positions in Nairobi, Addis Ababa and New York.

Emerging countries often have smaller missions in New York, so Kenya will need to beef up its mission to the UN. It will also have to be clear on where to focus its attention through an effective internal division of labour and balanced positions.

Kenya is expected to continue the role played by South Africa, and previously by Ethiopia and Egypt, to foster A3 unity based on AU positions. However, recent examples already show the difficulties it will face. The A3 was divided in approving a new political mission in Sudan, which is billed to replace the UN-AU peace operation in Darfur. Kenya has a key role to play in ensuring that the strategic partnership between the AU and UN is sustained.

Kenya has been active in the UN Peacebuilding Commission, and is expected to be a champion for the sustaining peace agenda. This will be particularly relevant for Kenya’s immediate region, which should dominate its strategic engagements on the council.

Somalia, South Sudan, Sudan and Abyei are all key issues on the council. Kenya will likely be an active member regarding negotiations in these countries. It should ensure the council supports the Horn of Africa as the region tackles its long-term peace challenges.

Kenya shouldn’t join the Security Council just for global visibility or to pursue only its national positions. Rather the term should be seen as an opportunity for coordination among African stakeholders. The two years on the council are short, and while it may seem like a sprint, if countries work together, the relay can transform the term into a coordinated marathon. Working with past and current members is not a luxury; it is a necessity.

In preparing for its term, Kenya has a great opportunity to learn from current A3 members in setting up its internal decision making and staffing systems, and to develop positions on specific issues. This will confirm that African member states can become more influential on the council, and effectively contribute to sustainable peace and development on the continent.