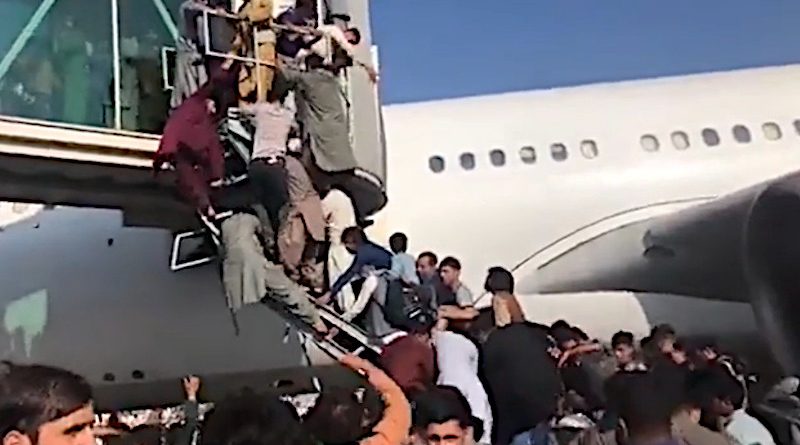 The level of incompetence apparent in the Afghanistan withdrawal has been breathtaking. Even a smart 12-year-old, after all, would know that you have to evacuate American civilians and vulnerable allies before removing your military personnel. This reality has given rise to staggering speculation, that, for example, the powers-that-be desired this messy outcome. Some have even theorized that the goal, by hate-America-first Deep Staters, is to diminish the United States.

But what if the goal is actually to damage the Joe Biden administration, something that’s already a fait accompli?

What if some people who pull strings were so angry about our Afghan exit that they said, “Okay, you want a withdrawal? We’ll give you a withdrawal you’ll never forget.”

I am one to often say, when addressing conspiracy theories especially, that you should never “attribute to malice what is better explained by stupidity.” This is generally a good guide, but the problem is that the Afghanistan fiasco is not better explained by stupidity. Oh, sure, it is true that people who believe boys can become girls, as many pseudo-elites do, aren’t exactly in touch with reality and that “the eye altering alters all” (including military operations). But as “Denton Scratch” — the pen name of a man identified as “a retired 30-year U.S. military veteran with experience in planning for noncombatant evacuation operations” — pointed out Saturday in “What the heck is going on with our military in Kabul?” to believe the “botched” withdrawal is mere incompetence, we have to believe that the military suddenly forgot how to perform numerous garden-variety operations that it has been performing for decades.

Then there’s investigative reporter Lara Logan, who has spent time in Afghanistan and has some sources. She said in a striking Tucker Carlson Today interview last Wednesday that “at its heart,” the withdrawal situation is “very simple”: It “comes down to the fact that the United States wants this outcome.”

“Whoever is in power right now, whoever is really pulling the strings – and I don’t know that – they could do anything they want to change this,” Logan elaborated. “And they’re not.”

Logan’s claim is that the U.S., insofar as worldly entities go, is practically omniscient and omnipotent. Our National Security Agency (NSA) watches continuously like an all-seeing eye and “is known as the crown jewel of intelligence collection in the world,” as Logan puts it. “There isn’t a digital signature in existence that they don’t collect and store and analyze and have algorithms and everything else to sort through,” she continued, expressing that there’s no way the intel agencies “missed this” (what would transpire).

Logan also “posited that the NGIA [National Geospatial-Intelligence Agency], which controls government satellites and other armaments, has been watching the Taliban taking control of abandoned U.S. military equipment; bringing it back east into Pakistan,” writes Fox News.

“‘The NSA and the [NGIA] are watching this happen in real time,’” the site continues, quoting the journalist. “‘And they’re doing nothing to stop it. Why not? So what the Afghans will tell you…is that the United States chose this outcome.’”

Insofar as military operations go, Logan points out, correctly, that the U.S. can do anything it wants in Afghanistan.

Next we have independent journalist Glenn Greenwald. He appeared on Tucker Carlson Tonight’s Friday edition to discuss why, quite oddly and after basically being Biden’s public relations team, the Enemedia now have the knives out for him. Greenwald said that the media’s closest relationships “are with the CIA, with the Pentagon, are with the national security state” and that these entities did not want to exit Afghanistan. In fact, he points out, they’re so zealous about this that when President Trump wanted to withdraw, the CIA invented a story about the Russians putting bounties on American soldiers’ heads to thwart his ambition.

Greenwald theorizes that the Enemedia turned on Biden 180 degrees because they’re executing the military’s and intel agencies’ will, which is that the commander in chief should be blamed for the botched withdrawal. But here’s what he didn’t say:

What if the military/intelligence complex purposely botched the withdrawal to begin with, knowing the buck would stop with Biden?

Remember that left-wing senator Chuck Schumer (D-N.Y.) did state in 2017 (in reference to Trump), “Let me tell you: You take on the intelligence community — they have six ways from Sunday at getting back at you.”

Did we just witness the sixth way in Afghanistan? Biden would be especially vulnerable to such contrivances, do note, because he can be easily painted as what he is: a senile old man incapable of leading the country.

Note also that the strategy in question here accords with man’s nature, often having a visceral basis, and has been used innumerable times before in various contexts. If you must execute a plan that thwarts a long-standing plan you hold dear, and you’re unscrupulous, the instinct is to thwart that plan in response. It not only is emotionally satisfying but, in the military/intel agency complex’s case, sends a behavior-modifying message that reinforces Schumer’s warning: You challenge us — we’ll destroy you.

As for why the Deep State has this love affair with war, Greenwald posits that the Afghanistan withdrawal “offends their ideology” and undermines their warped conception of American greatness. (This, of course, contradicts the more common theory that the Establishment wants to take America down a peg, but actually makes more sense in its own way.)

Consider as well that, as also reported on Tucker Carlson Tonight’s Friday edition (video below), the Afghan war was apparently a huge “money funneling” operation through which defense contractors got rich. You can bet, too, that many politicians and high government officials also benefited financially (e.g., via donations). Stopping the gravy train couldn’t have been well received.

Of course, this is all speculation. As I’m wont to say, quoting ancient Chinese sage Confucius, “Wisdom is, when you know something, knowing that you know it; and when you do not know something, knowing that you do not know it.” The Afghanistan withdrawal fiasco is a confusing situation, and we may never know exactly why it occurred. But one thing is for sure: There are a lot of strange, evil people in our government’s upper echelons. I wouldn’t put anything past them.