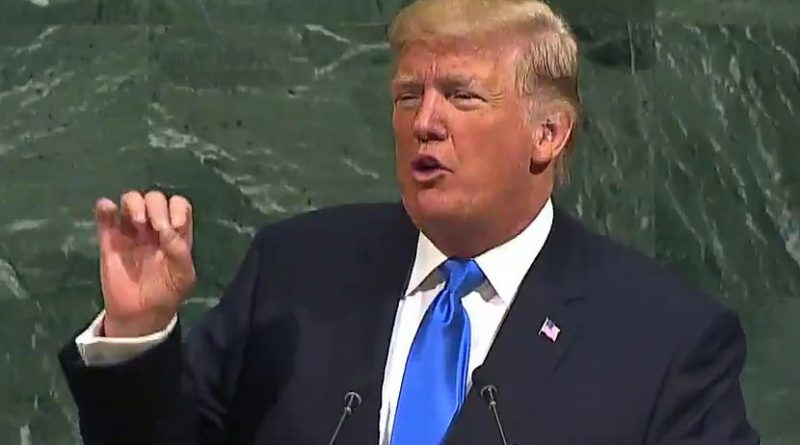 For many years every spring, together with a colleague of mine, I have taken a group of some of our finest students to participate in a Model UN conference in New York. This is the climax of months of preparation by our delegation. Our students, who represent a country assigned to us, debate, negotiate, and write position papers and resolutions on an array of topical issues that the world is facing.

Thousands of students from around the world gather for this occasion, which aims to prepare them to be better global citizens by way of an experience that highlights the value of collaboration and the cooperative resolution of disagreements and conflict. Watching US president Donald Trump’s speech last week to the UN General Assembly made me wonder whether in just over 41 minutes he had managed to destroy an educational work of many years.

To be sure, Trump was not the only one to reveal bellicose tendencies, but considering he is leader of the country with the most powerful military capabilities on the planet, his horror show should ring alarm bells in capitals around the world. After all, the mission of the UN is to achieve a more peaceful world through multilateral diplomatic collaboration. The UN was created to maintain peace and security, protect human rights, promote sustainable development and ensure that this is all done in accordance with international law.

Instead Trump deliberately chose to grab the headlines by threatening the obliteration of another member of the organization, North Korea. There is no doubt that North Korea poses a serious threat to peace and stability in its region, and potentially beyond. Not even its close (probably only) ally, China, is defending the provocative behavior of Kim Jong Un’s regime. However, threatening to “totally destroy” North Korea plays into the hands of the regime in Pyongyang. It vindicates North Korea’s very claim that it needs to develop its WMD capabilities as a survival mechanism and not to pose a threat to others as the rest of the world sees it. Deterring North Korea from using its military capability against its neighbors is paramount, but the UN stage is also an opportunity to offer a diplomatic alternative in the spirit of the charter of the organization and of its founders. Clearly, a threat to eliminate another country in no way aligns with the UN charter’s remit to prevent war through peaceful means.

As always with Trump, it is not only the substance of what he says that can be objectionable, but his aggressive and flippant style. Referring to Kim Jong Un as the “Rocket man … on a suicide mission for himself and his regime” is juvenile, incendiary and completely unnecessary. It is a continuation of his election campaign style of scoring cheap political points to please his hard-core supporters. And it does not advance the successful resolution of this crisis by a single inch.

However, it was not only North Korea that was on the receiving end of the American president’s scorching criticism, but also Iran, Cuba and Venezuela; all were subjected to his ill-informed verbal attacks. One of his recurrent themes is to refer to the nuclear agreement with Iran as an “embarrassment” and “one of the worst and one-sided transactions the US has ever entered into.” Only Trump knows what criteria he applies that make the Joint Comprehensive Plan of Action one of the worst agreements ever, but he also suggested absolutely nothing to rectify its flaws, and there are admittedly quite a few of them. Worse, he confuses Iran’s compliance with the terms of the 2015 agreement with its aggressive regional policies in search of greater influence.

According to the International Atomic Energy Agency, which has inspectors in Iran to monitor its nuclear sites, Tehran is complying with the terms of the agreement. Imposing new sanctions or trying to change the terms of the treaty will face a wall of resistance not only from Iran, but also from P5+1 countries and others who worked for years to reach it. Trump, in his customary way, would rather deliver a maddening speech than present an operational plan to contain Iran’s meddling in Syria, Lebanon or Yemen, where it is at its most subversive. He could even have reached out to those in Iran who would like a pragmatic engagement with the international community, but this is not his modus operandi.

Not for this was the UN founded. Not for speeches from the likes of Trump, Rouhani and Netanyahu that underline discord and rift. The annual gathering was always meant to be an opportunity to advance commonalities, an occasion to set the agenda for dealing in a collaborative manner with the most pressing issues the world is facing. Instead, it has become a talking shop in which the dirtiest of washing is hung out in front of a skeptical and disillusioned global public. Maintaining this line could become a self-fulfilling prophecy, resulting in unnecessary and unwinnable wars.

Home » The UN Supposed To Resolve Discord, Not Encourage It – OpEd