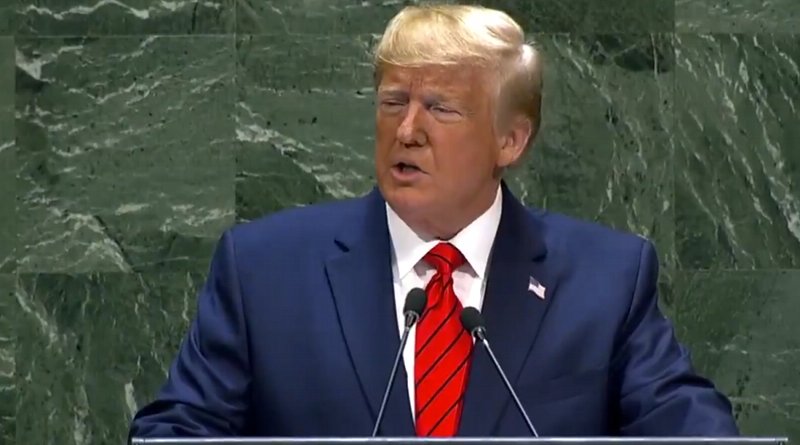 (RFE/RL) — U.S. President Donald Trump has defended his policy on Iran before the UN General Assembly and called on all nations to act against Tehran and not “subsidize Iran’s bloodlust.”

“One of the greatest security threats facing peace-loving nations today is the repressive regime in Iran,” Trump told world leaders gathered at the UN headquarters in New York on September 24.

Denouncing “four decades of failure” since the Islamic revolution, he called for Iran’s leaders to “finally put the Iranian people first,” and warned that U.S. sanctions will not be eased unless Tehran changes it behavior.

“All nations have a duty to act,” Trump said. “No responsible government should subsidize Iran’s bloodlust. As long as Iran’s menacing behavior continues, sanctions will not be lifted. They will be tightened.”

The U.S. president accused Iranian leaders of “fueling the tragic wars in both Syria and Yemen” and blamed the country for a recent attack on Saudi oil facilities.

Tensions in the region have escalated over the September 14 attack that the United States, Saudi Arabia, and Western European countries have blamed on Iran, which denies any involvement.

Divisions also exist in Syria, where Iran, along with Russia, has supplied crucial assistance to President Bashar al-Assad in a civil war raging in the Middle East country since anti-government protests broke out in 2011.

The United States and Turkey have backed differing rebel forces, while extremist groups, including Islamic State and Al-Qaeda, also entered the fighting and were opposed by all other sides.

More than 400,000 people have been killed and millions have been displaced since the war began.

Thousands of people have been killed in the fighting amid what has been called a “humanitarian nightmare,” with both sides accusing the other of human rights violations

Tehran and Washington have been at loggerheads since the United States last year withdrew from a 2015 international deal between Iran and world powers under which Iran agreed to rein in its nuclear activities in return for an easing of sanctions.

The United States has since reimposed crippling sanctions on the Iranian economy, and Tehran has begun reducing some of its commitments under the nuclear accord.

Iranian President Hassan Rohani told reporters at the UN on September 24 that he was open to considering small changes in the nuclear accord “if sanctions are taken away.”

Speculation has arisen over a possible meeting between Trump and Rohani at the UN, but both countries have played down the possibility, with the U.S. president on September 23 saying he had “nothing scheduled at this moment.”

French President Emmanuel Macron announced separate meetings with Trump and Rohani as he tries to facilitate a meeting between the two on the sidelines of the General Assembly.

Trump rejected Macron’s offer to help engineer a meeting, saying that “we don’t need a mediator.”

“They [the Iranians] know who to call,” Trump added.

On Afghanistan, Trump blasted the Taliban for choosing to “continue their savage attacks” in the war-ravaged country.

He said Washington “will continue to work with our coalition of Afghan partners to stamp out terrorism,” and vowed to work for peace in the country.

“While anyone can make war, only the most courageous choose peace,” the U.S. president said. “America’s goal is not to go with these endless wars.”

Earlier this month, Trump abruptly cancelled negotiations with the militant group aimed at ending the 18-year war in Afghanistan, following nine rounds of talks between U.S. and Taliban negotiators in Qatar.

One thought on “Trump Blasts ‘Repressive’ Iran At UN, Calls For Action”