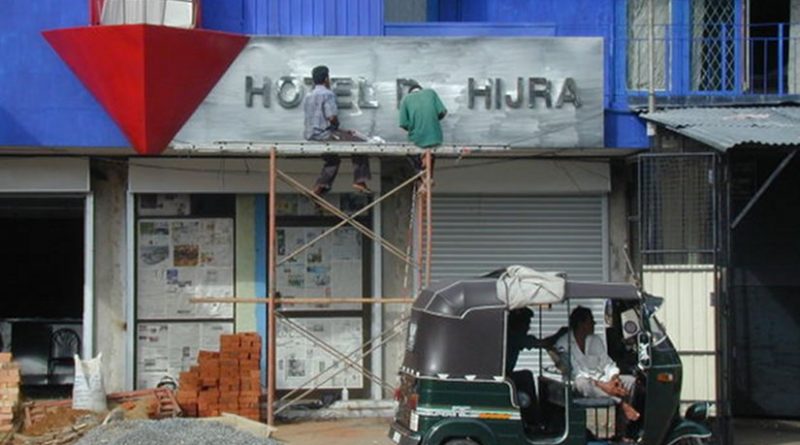 Sri Lanka is an island full of natural resources with beauty but without any deserts or volcanoes. It was full of forest cover until human hands misused this bounty, causing flooding and landslides.

Environmental degradation and deforestation began with the colonizers causing heavy damage to the ecological balance by planting tea plants and rubber trees without maintaining any safeguard to balance nature.

There was harmony in the whole system of life with an ecological balance before the foreigners walked in. Foreign conquerors were interested in amassing wealth at the expense of the local fauna and flora.

Perusing the ancient records of the historical achievements of Sri Lankan people, one can gauge their advancement in comparison with the foreign powers. They achieved this higher technology without any foreign intervention.

Irrigation canals constructed many centuries ago stand as monuments to prove the point. How did those experts of that bygone era bring water from lower regions to higher places in a simple manner?

The plantation sector was introduced haphazardly, causing the destruction of the local culture based on agriculture. The natural flow of groundwater and rainwater could not be managed by foreigners as our advanced ancient people did.

Christianity, too, entered the island with these economic barons, but their religion was not palatable to local people. For example, local saint Joseph Vaz initiated vernacularization, while inculturation among the local populace was led by Father Jacome Gonsalvez in the 17th and 18th centuries.

Though there were positive elements that accrued to the island, negative factors harmed the people and development of the country because of the defilement of the pristine cultural heritage by the invaders.

Independence was achieved in 1948, but because of the domination of foreign rulers their attitudes and values seeped into the mentality of the local community. After independence, our political and economic authorities followed the colonization system as the best option.

Unfortunately, 72 years of political freedom have not contributed to Sri Lanka’s development and prosperity. During the last era of the foreigner, Sri Lanka economically was in the top 10 nations of the Asian continent. But our rank has declined to 38th place.

Many causes can be cited for this plight: corruption, crime, defrauding of state funds and property, selfishness, malpractice, deforestation. There were no local enterprises and projects to develop the country economically.

The religions and culture that were linked to each other were disregarded, causing further damage to the ethos of the blissful island of Sri Lanka. The teachings of the majority religion and the teaching of love (Maithree) seemed to have fallen by the wayside in giving way to greed in all aspects of social life.

The majority have become very individualistic and selfish even though many religions have built their own cultic centers. Ritualism seems to dominate every aspect of religious and social life.

Role of the Catholic Church

The first Christians in Sri Lanka hailed from India and the Middle East. The Thomas Christians and Nestorians were few in number and had very little impact on the culture of the country. Major influence on the people was felt only after the arrival of the Portuguese in 1505. With the support of the Sinhala kings, the Portuguese were able to identify themselves among the local citizens.

They were able to accommodate only very few local cultural factors in their system as an organized group. Their approach was not to learn from the culture of the people through the Sinhala and Tamil languages.

Almost all the institutions of the Church are operative at national conference level and at diocesan level in order to be on a par with the Roman Curia. Inadvertently, this does not encourage any local initiatives. Sri Lankan Catholics remain isolated because of a majority phobia. The minority complex has become a barrier for Christians to voice their views and give proper witness to their faith.

The main question that vexes the mind of Christian leaders and the faithful is: how would the majority leaders react? This backward attitude has hindered the promotion of any social activism and is unable to provide progressive pastoral approach to the welfare of the country.

The malignant sickness that prevails among the majority religious group is not keeping to the core teachings of their founder. This same attitude prevails among Catholic men and women, merely remaining faithful to rituals and celebrations.

This is a sad experience of not being faithful to stand up to the following of their founder Jesus. Issues of justice are forgotten because the majority sentiments are followed to the letter, believing that it would upset the majority.

Silence is regarded as a golden virtue by most of the clergy as well as Catholic lay leaders, which is contrary to the teachings of Jesus Christ as he died for the welfare of the people in redemptive work.

In pre-Covid times, Sri Lanka faced a drastic terrorist attack on two important churches in the Western Province on the important day of the victory celebrations of Jesus’ resurrection on April 21, 2019. The local Church faced a further letdown with the sudden upsurge of Covid-19 infections.

We Catholics have followed the government’s health guidelines to the letter, and the lockdown and physical distancing were observed without question.

We also observed the specific instructions concerning the livestreaming of services during the liturgical lockdown, even without members to propose any suitable suggestions to make the livestreaming useful to the faithful. I feel that we were keen to follow only the ritual rather than discerning the message of God.

Many say they were faithful in family prayers but further opportunities were missed in educating the people about how to use the Word of God in a profitable manner.

After 14 weeks of livestreaming of liturgy including the Sunday Eucharist with limited persons, the Sunday obligation was extended to the whole week.

In some parishes the public address system was used to conduct prayer services and to share news. Some appreciated it while many said it did not enhance their spirituality.

Time spent during the lockdown could have been used to think about discussing and educating the ministerial priesthood of the clergy and the common priesthood, the religious nuns and brothers and the laypeople. We hear of some attempts by local and foreign media to discuss relevant attempts about such pastoral concerns.

In the Archdiocese of Colombo, the major means of communication was sending text messages to most of the priests who use mobile phones, but other online means were not used. However, some pastors used these means to contact the youth in their parishes to discuss matters of interest among themselves.

Here, the question can be posed as to why the church leadership did not attempt new avenues or means for evangelization. Were they merely relying on the clergy-dominated Church? Is the decision-making process limited to the church hierarchy? Some of the queries did not surface. Was it due to suppression of free thinking? Or wasn’t there an adequate form to exercise free thinking?

The Vatican requested all Catholics to celebrate “Laudato Si’ Week” from May 16-24 to mark the fifth anniversary of the encyclical. But local church leaders were unaware of the call from the Vatican higher-ups and observed dead silence.

Only a few religious communities, due to their international links with the influence of the superior generals or some lay groups with international media support, took bold steps regarding environmental concerns found in Laudato Si’, but without the support of the local hierarchy. Is this silence due to the negative attitude or antipathy concerning Pope Francis among the local hierarchy?

*Father Reid Shelton Fernando is a prominent human rights defender in Sri Lanka. He was a lecturer and former chaplain of the Young Christian Workers Movement. He is well known for his writings and commentaries on social and political issues. The views expressed in this article are those of the author and do not necessarily reflect the official editorial position of UCA News.