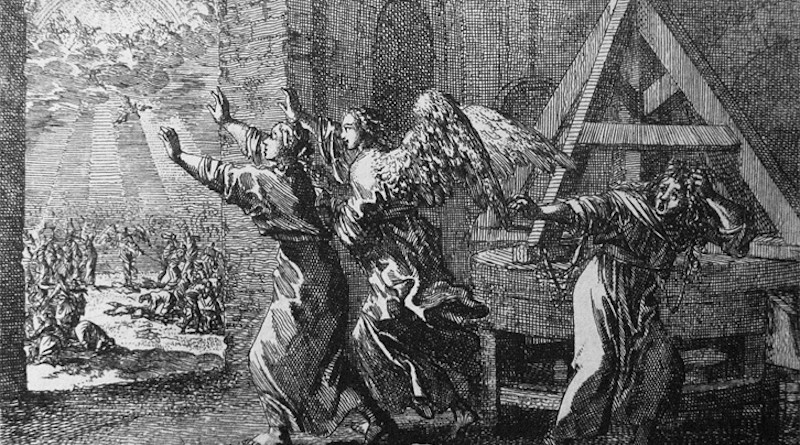 The Rapture: One at the mill. Jan Luyken etching - Bowyer's Bible, Bolton, England

The End Times are nearing, and the ‘Rapture’ could happen within 10 years, according to the World Bible Society President. Dr. F. Kenton Beshore. More specifically, Beshore claims that the “Rapture” is likely to occur between now and 2021 and the Second Coming of Jesus Christ from 2018 and 2028.

The ‘Rapture” is the belief by some Protestant Christians that prior to the Second Coming of Christ, faithful Christians will be “caught up,” and removed from the Earth. Pre-tribulation rapture theology — such as espoused by Beshore — was developed in the 1830s by John Nelson Darby and the Plymouth Brethren and popularized in the United States in the early 20th century by the wide circulation of the Scofield Reference Bible.

Beshore says he’s releasing his estimate at this time of global economic, political and spiritual crisis in hopes of inspiring believers to get prepared for the greatest opportunity for worldwide evangelism in the last 2,000 years.

As part of this effort, Beshore says his Costa Mesa, Calif.-based ministry is printing millions of copies of the 45-page Jewish Scriptures to distribute to Jews worldwide before the seven-year Tribulation period. Beshore hopes Jews will read the books containing Biblical prophecies about Jesus’ first and second comings and become some of the “144,000 Billy Grahams” described in Revelation 7 that will lead billions to Christ during the Tribulation.

“There are 144,000 Jews during the Tribulation who are going to turn to the Lord,” says Beshore — the 86-year-old father of Kenton Beshore, pastor of Mariner’s Church in Irvine, Calif., one of the nation’s 25 largest churches. “Now, we are all going to be gone (following the Rapture).”

“But if we can get our Jewish Scriptures into their hands now, the Holy Spirit will lead them to them at the right time. They may have set them aside, but they will read them, turn to the Lord and lead billions and billions to Jesus,” said Beshore.

For his prediction, Beshore updates some of the material used in the 1970’s Hal Lindsey book, “The Late Great Planet Earth.” In the book, Lindsey claimed he had unlocked the secrets of the Olivet Discourse in Matthew 24-25 in which Jesus described the signs of his Second Coming.

Lindsey suggested the generation that witnessed the 1948 rebirth of the nation of Israel — purportedly symbolized by the fig tree — would see the return of Christ. Lindsey wrote a biblical generation is “something like 40 years” — suggesting that “within 40 years or so of 1948, all these things could take place.”

But when 1988 came and went without Jesus’ return, Lindsey came under heavy criticism, ministers shied away from teaching Bible prophecy and many became skeptical about predictions regarding the Second Coming. They noted Jesus’ admonition in Matthew 24:36 that no one would know the “day or hour” of His return.

While no one knows the exact date, Beshore argues people can know the “times and seasons,” or the approximate timeframe, by watching for the signs Jesus described of his return.

In terms of the prediction in The Late Great Planet Earth, Beshore argues Lindsey’s interpretation of the parable of the fig tree was right, but he was wrong about the length of a biblical generation.

Instead of 40 years, Beshore says Psalms 90:10 reveals a biblical generation is actually 70-80 years: “The days of our life are seventy years, or perhaps eighty, if we are strong.”

Taking into account the seven-year Tribulation period, Beshore expects the Rapture — the belief that Christians will be miraculously removed from the Earth prior to the Tribulation and Second Coming — to occur sometime between now and 2021.

But before the Rapture occurs, Beshore says certain events must still take place.

Beshore says five of these events are taking place now — the “falling away” or apostasy of the church, an increase in travel and knowledge, the rise of anti-Semitism, development of “Mark of the Beast” technology and that Israel is dwelling safely before an attack by a coalition of Russian and Islamic nations.