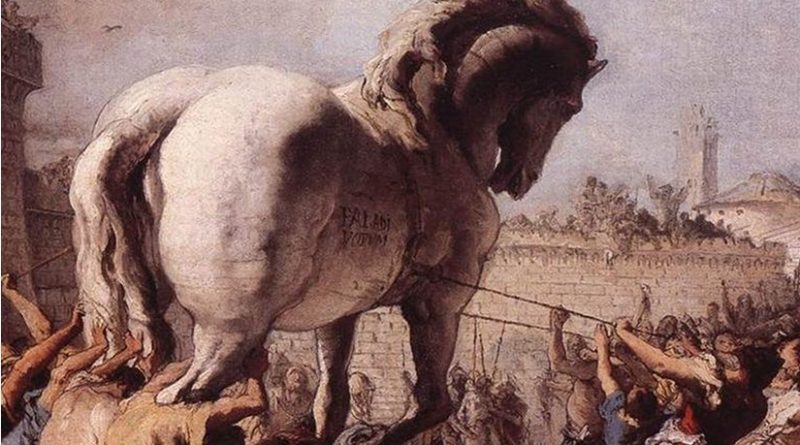 Detail from The Procession of the Trojan Horse in Troy by Domenico Tiepolo (1773), inspired by Virgil's Aeneid. Source: Wikipedia Commons.

Analogies between Greek mythology and contemporary Greek politics come easily these days. If Greece’s financial crisis was akin to the hubris of Daedalus flying too close to the sun before crashing disastrously to Earth, Athens’ current role in abetting Russian interference in European politics surely lends itself to a comparison with the siege of Troy and the wooden horse filled with saboteurs who opened the city gates, allowing it to be overrun by its enemy. Only in the modern setting, the Trojan Horse would be filled not just with Greeks, but with a host of European discontents from Italy to Hungary who seem poised to gift Vladimir Putin the keys to Europe.

The lack of unity in the EU response to Russian support of Bashar al-Assad’s forces in the Syrian civil war is the latest manifestation of discord between Europe’s hawks and doves when dealing with Russia. Although the EU’s 28 foreign ministers did come to an agreement on a statement condemning Russia’s air campaign over Aleppo as “clearly disproportionate” and “the deliberate targeting of hospitals, medical personnel, schools and essential infrastructure” as possible war crimes, the bloc’s bid to enact further sanctions against Russia fell through on October 20. Besides Greece, Cyprus, and Hungary have also voiced opposition to new sanctions, as has Italy, which has broad economic ties with Moscow and was the star participant at this year’s Sankt Petersburg International Economic Forum – Russia’s Davos.

That the EU should be so riven by disagreement at a time when the Kremlin is upping the ante against the West to alarming levels is a cause for serious concern. Not since the depths of the Cold War have relations been so fraught between Moscow and Western capitals that troop movements and nuclear threats are commonplace in Europe’s political landscape, and yet that is exactly the situation we find ourselves in today. Nuclear-capable Iskander-M missiles being moved into the Russian enclave of Kaliningrad, within easy range of Poland and the Baltic states and with further modification, Berlin; NATO battalions and British soldiers being sent to the region as a deterrent; and regular incidences involving Russian fighter jets entering European airspace with RAF jets beings scrambled in response. All evidence of how rapidly relations have deteriorated since Russia’s annexation of Crimea in the early stages of the Ukraine crisis.

An equally worrying development which has flown somewhat under the radar concerns the construction of a Russian- built nuclear power station in the Belarusian district of Ostrovets near the Lithuanian border. Rosatom, the Russian state nuclear energy agency responsible for the power plant’s design and construction, has been accused of being a tool for Russian nuclear diplomacy and a means by which Moscow can exert political pressure abroad, much as it does with its gas and oil pipelines. Only in the case of nuclear energy, the stakes are even higher and in the particular case of the Ostrovets plant there are a number of reasons for extra concern. The list of worries catalogued by the Lithuanian government regarding the project is long, and includes the plant’s location in an area of seismological activity, the lack of an aircraft crash assessment for commercial airliners as well as the failure to perform stress tests of any kind on the facility. Should a Fukushima style event unfold, the Lithuanian capital would lie within the evacuation zone, with cities as far away as Stockholm and Berlin also suffering from the fall-out.

Remarkably, even as Russia adopts such a belligerent stance, Southern EU states such as Greece actively continue to seek out partnerships with Russia, highlighting the success of its two-pronged approach to divide European opinion. A case in point is Athens’ expressed interest in a new pipeline project to transport Russian gas into Europe even after a previous project slated to pass through Italy and Austria was abandoned in the wake of the Ukraine crisis. Yet even more unsettling is the claim made by French president Francois Hollande that Alexis Tsipras personally asked Putin if the Greek government could print Drachmas in Russia should it be forced out of the Eurozone.

However, compared to the close ties fostered between the Kremlin and Hungary’s Viktor Orban or France’s Marine Le Pen, Greece is only a minor offender. And in a US presidential race that has been nothing short of shocking, arguably the most shocking thing of all has been the sight of a potential US president refusing to condemn, or even countenance criticism, of what appears to be direct Russian interference in the election.

While Russia appears to be playing Europe off the field in terms of political strategy, there is some light on the horizon for European interests in the form of a new pipeline interconnector between Bulgaria and Greece. The pipeline will allow gas to flow to Europe from central Asia without passing through Russia. Welcome as this development is, especially if it will result in bringing Greece more firmly back into Europe’s fold and out of Russia’s embrace, it is, all things considered, a small victory in a new Cold War, which on many scores, Russia is winning.