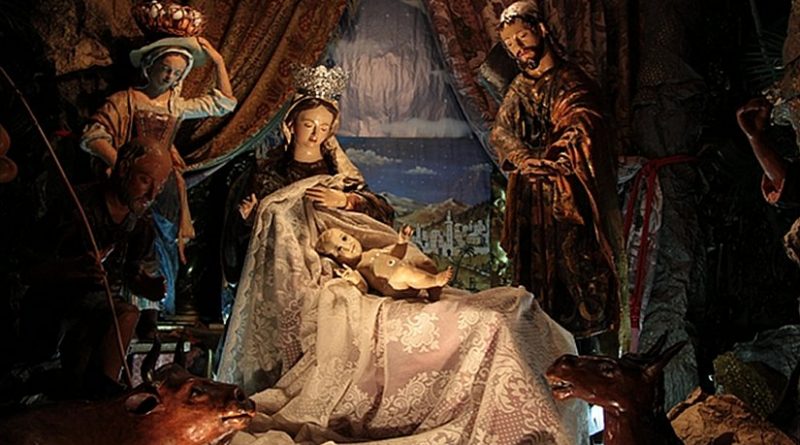 File photo of a Nativity Scene.

By Rev. Robert A. Sirico*

All of life is God’s gracious gift. This graciousness applies not only to ourselves and our neighbors, each of whom is made in His image and likeness, but applies as well to the whole of creation which was entrusted to the human family’s care and cultivation (Gen. 1:26-31).

This gracious gift, both of ourselves and the creation, was marred by our own disobedience, born of ingratitude, and resulted in our separation from that gracious Giver. Sin and death are the fruits of this separation. The remarkable thing is that, in the face of this primordial rebellion, God gives again. This time it is the gift of Himself in the divine person of his eternal Word or Logos, born of the Father before all ages, first born of all creation, “For in him all the fullness of God was pleased to dwell, and through him to reconcile to himself all things, whether on earth or in heaven, making peace by the blood of his cross.” (Col. 1:19-20)

This is Christmas. In a sense gifts are the theme, indeed, the very reason for the season, but not the gifts that we often suppose. Above all, it is the gift of the incarnation, the life, death, and resurrection of our Lord Jesus Christ born of the Virgin Mary in the town of Bethlehem as foretold by the prophets:

But you, O Bethlehem Eph′rathah,
who are little to be among the clans of Judah,
from you shall come forth for me
one who is to be ruler in Israel,
whose origin is from of old,
from ancient days. (Micah 5:2)

All this was then first announced to humble shepherds by an angel of the Lord,

Be not afraid; for behold, I bring you good news of a great joy which will come to all the people; for to you is born this day in the city of David a Savior, who is Christ the Lord. And this will be a sign for you: you will find a babe wrapped in swaddling cloths and lying in a manger. (Luke 2:10-12)

The Magi from the East would also receive the announcement of the incarnation, but in a more subtle and obscure form: by way of a star in the East, which, “…went before them till it came to rest over the place where the child was.” (Matt. 2:9) It is a wondrous thought to contemplate that these Magi, who were really primitive astronomers, received the announcement of human redemption by means of their own work: the study of the heavens.

The word “mundane” is usually taken to denote something uninteresting or boring, but the root of the word, mundum, means that which pertains to our world. The lesson here is that in our ordinary lives, in our mundane existence, God can be found. This is what Emmanuel means.  This discovery can also be made in our giving and receiving during this season in particular. Receive His gifts with a thankful heart this Christmas and find your rest in Him. Merry Christmas.

*About the author: Rev. Robert A. Sirico received his Master of Divinity degree from the Catholic University of America following undergraduate study at the University of Southern California and the University of London.  During his studies and early ministry, he experienced a growing concern over the lack of training religious studies students receive in fundamental economic principles, leaving them poorly equipped to understand and address today’s social problems.  As a result of these concerns, Fr. Sirico co-founded the Acton Institute with Kris Alan Mauren in 1990.

Home » The Gift Of The Incarnation – OpEd