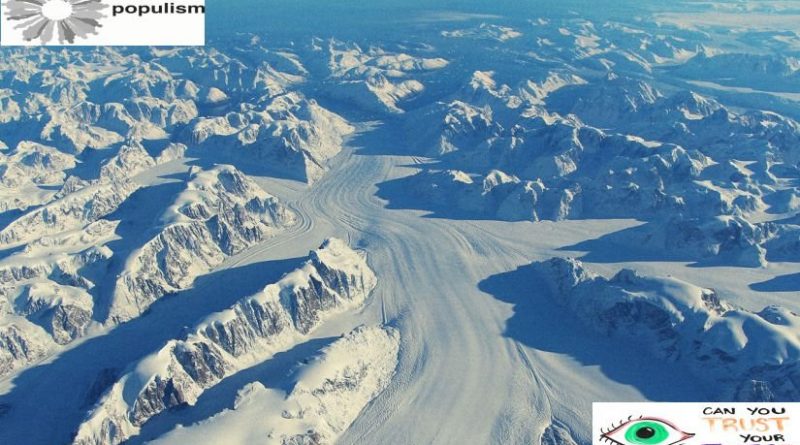 Although the sentence, “If facts contradict to my theory, the worse for the facts,” has been attributed to the famous German philosopher George Wilhelm Friedrich Hegel, within the world of 21st Century we can see a lot of examples of that phrase hidden under the two magic words of “populism” and “alternative facts”.

While in Europe everything is falling apart due to the rising populism of the neo-right parties that have made the foundation of their political program out of the recent massive immigration wave from the Near and Middle East countries, at the same time, abroad, in the United States of America there has arisen a new sociological attempt of the creation of “alternative facts” with the appearance of the new US president — whose name I do not want to mention for the reason who knows what might happen even to me (after all his spokesman confirmed on Tuesday that his boss, the US president, is a conspiracy theorist).

Also, I disagree with Slavoj Zizek’s statement that the new US president is a “liberal centrist” because behind, or even more, on the scene we have visible devotions of him being a “neo-liberal populist”.

I am really afraid that irregardless of having already survived one war (back in ’90s of the XXth Century during the dissolution of former Socialist Federal Republic of Yugoslavia – in Bosnia and Herzegovina) that now the word “truth” has lost its meaning, and is being faced with adaptable and vivid “alternative facts” within the creation of the new recreational political establishment whose goal is to continue making totally “blind” those who are living within the reality of being already slightly-blinded people of the Earth.

The attacks on the mainstream media, coupled with a lack of media literacy within the wider areas of population, along with the information that eight people hold 50% of the world’s wealth and more money than 3.6 billion people of our planet, all simply shows that we are faced with an abyss that is just one step in front of us, while, in the same time, behind us we just have lost hope.

What is the solution for the World as Global Sin in this moment of living for all of us, and, above all, for the future generation, if there will be any?

Before answering that question, an aside to note that we might be in the near future faced with the plot of possible election hacking in Europe by Russian hackers, as US intelligence service have warned their allies in Europe this January. However, having on one side a new president who is really a New World Order leader, a populist and a person devoted to alternative facts (and who does not hide that a “lie” for him is just a tool within his agenda of gaining a new “truth” of the World), and on the other side we have a deeply and destructively divided intellectual power of the World, we can just hope and try to shake up this new status quo by the following:

1. 2017 might be a new light for the World – only if liberal, conscious and open and free-minded people of all ethnicities, race and/or gender and/or age, using Social Media rise up and establish a new conscious of the World, respecting thee differences among us as our advantages for the benefit of all.

2. The goal is the survival of the World, but not for the benefit of a few.

3. The tool for that is our consciousness in connection with the ultimate objective that we are humans in the first place, and after that everything else.

Although, the loss of consciousness is simply connected with consumerism, neo-liberalism, must have it that everyday society within which the using of new technologies does not exist, as mentioned, for the benefit of all, but for the benefit of the few. The introduction of robots working instead of people creates new unemployed, instead of creating a society within which less work will be more devoted for more inspirational creation of other skills, that is focused on our own social development through knowing more about other cultures and by the creation of more cultural competencies for the benefit of the masses.

Is that a new vision of devil word of “socialism”?

No, and my opinion is that we have to establish a new word that will suck into its meaning the full and devoted respect for others who are different from us, and establish a World of mutual trust and joint work that is devoted to the creation of an education system that will be devoted to skills and critical thinking – through the communicating of hope and trust in our time, as Pope Francis underlined on January 24, 2017.

Furthermore, being faced with terrorism we have to stress that when we say “Muslim terrorism” and/or “Islamic terrorism” we have to understand that those terrorists are not Muslims at all and they do not belong to the Islamic religion. No, this terrorists are simply the trash of the humanity, because terrorism has no religion, and the same goes for even those who committed extremist acts supposedly on behalf Christianity, hiding behind so-called “white supremacy” and/or defending a faith, even in the USA.

So, is religion an answer? What is needed is not just a proper, joint and open discussion of the religious leaders of the leading religion of the world, but also an open and fair talk about the real issues for the world’s survival.

Let us call this new word SOCIO-ALTERNATIVISM, because, believe it or not, if do not start talking and talking and talking about the alternative solutions to our problems, we will be faced with the further development of the World as Global Sin – regardless of our race, ethnicity, gender and/or religion. Simply put, the first part of the word is related to society in general, while the second part shows that we have to seek for alternatives, as the current societies in the World cannot show us the light at the end of tunnel.

The answer is within the consciousness of all of us. We have to start working on a Brand New World Order of socio-alternativism. For the benefit of all, through the interactions, integrations and innovations of the souls within and around all societies of the World.