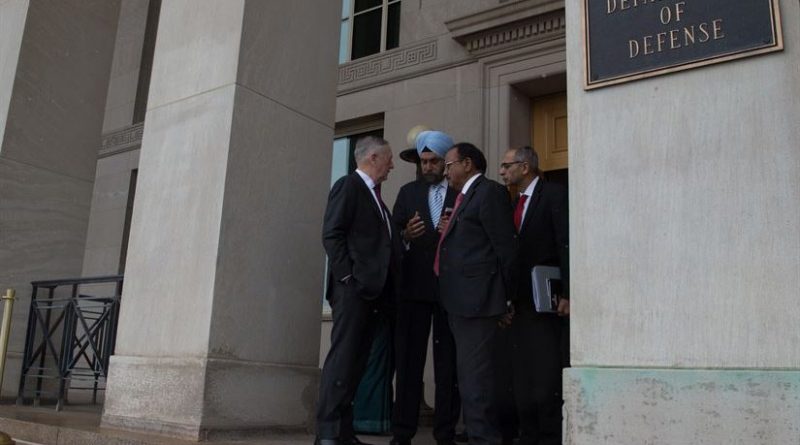 US Defense Secretary Jim Mattis hosted Indian National Security Advisor Ajit Doval at the Pentagon on Friday to discuss the importance of the U.S.-India relationship and the role of both nations in cooperating to uphold international laws and principles, Pentagon spokesman Navy Capt. Jeff Davis said in a statement following the meeting.

“Democracies like ours need this sort of dialogue and we have had a strengthening of the relationship over the last several years,” Mattis said of the U.S.-India relationship during a media availability before the meeting.

During the meeting, the defense secretary specifically applauded India’s efforts to promote stability in the South Asia region, Davis said, and both leaders reaffirmed their intent to build upon the significant defense cooperation progress made in recent years.

“We share the values,” Doval told reporters. “We share the democracy. We all have the very common objective and interest, both for the region that I come from and also globally that’s able to work together, share our ideas and thoughts and bring about some new innovative changes and improvements.”

Mattis and Doval further discussed collaboration on a wide range of regional security matters, including maritime security and counterterrorism, Davis said, and the two leaders pledged to continue the strong defense partnership between both nations.