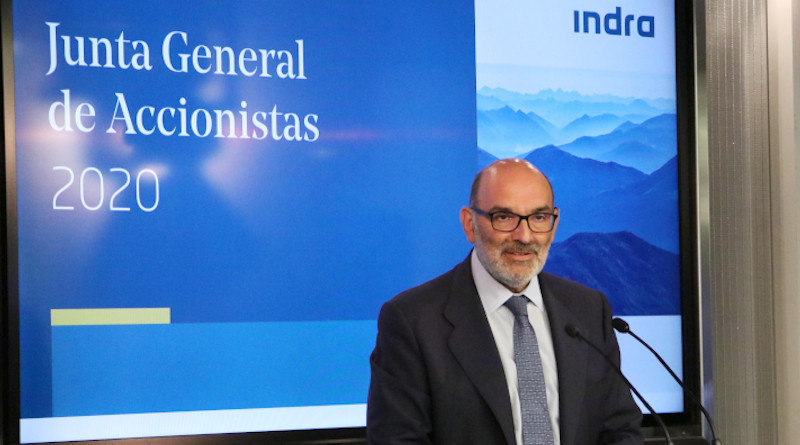 Fernando Abril-Martorell, Indra’s Chairman, said Thursday that the company will extend its transformation and refocus its strategy in order to respond to the structural changes caused by Covid-19 and meet its customers’ demands for different solutions. He added that the company will act on its efficiency and competitiveness in the short term.

At Thursday’s Shareholders’ Meeting, Abril-Martorell indicated that a very positive dynamic was influencing all the aspects of the company’s activity (growth, profitability, the progressive improvement of the offer and recruiting and retaining talent), as demonstrated by the 2019 results.

“We set ourselves an ambitious budget for 2020 and we were making good progress towards our goal of becoming the company we want to be, namely the European and global technological and digital leader in the areas of Information Technologies and Transport & Defence and the firm that attracts, employs and provides development opportunities for the finest digital talent in Spain and Latin America,” Abril-Martorell said.

Abril-Martorell noted that this momentum has been drastically interrupted by the Covid-19 crisis, whose effects have truncated this positive evolution and introduced elements of great uncertainty with respect to its extent and duration.

At the meeting, Indra’s Chairman explained that, in the wake of the initial negative shock and the health crisis, the company has reacted and adapted well. But he indicated that the new scenario will drive profound structural changes for Indra’s customers in terms of their business and operational models and their technological needs. This will lead to a demand for different technological solutions with very high transformational speed and more pressure for greater efficiency. In this regard, he highlighted the acceleration of the digitization of all the sectors.

Abril-Martorell stressed that, in view of this challenge and the current context, Indra must extend its transformation so as to provide a streamlined and dynamic response to the profound structural changes stemming from the new scenario created by Covid-19 and to recover the competitiveness lost due to the crisis.

The above competitiveness is highly dependent on the company’s ability to grow and leverage its fixed costs, its Chairman explained.

“We also have to take into account that part of the work we deliver in affected geographical areas such as Latin America and the Middle East is performed in Spain. The global slowdown is having a direct and multiplying effect on our competitiveness in Spain,” Abril-Martorell said.

“The impact on our accounts is already profound and we don’t know how long this will last, so, as well as preparing for the future and refocusing our strategy, we have to make decisions to provide an adequate and suitable response in the short term. To guarantee our future we also have to act on our efficiency and competitiveness in the short term,” said the company’s Chairman. “This is the only way we can become the company we want to be, leading this new era and continuing to offer high potential for growth and value creation in this new scenario.”

Abril-Martorell added that Indra has built a uniquely powerful set of commercial and technological capabilities. This has been possible as a result of sustained investment, a long-term vision, unique strategic, trading and business perspectives, an extraordinary team of technological and digital talents in a highly-dynamic global industry and potential capable of generating a great deal of value for Spain.

Abril-Martorell expressed his conviction that, despite having to face up to significant challenges and make difficult decisions in an environment with a high degree of uncertainty, there are many reasons for looking towards the future with optimism.

“Thanks to everything that’s been achieved in recent years, Indra is in a position to overcome the current difficulties, embark on a new transformation and capitalize on its undeniable strengths in order to once again grow and generate high-quality employment very soon,” Abril-Martorell said.

Approval of all the proposed agreements

Indra’s shareholders have approved the Annual Accounts and the Management Report of the Board of Directors and adopted all the resolutions proposed by the latter by a large majority.

With regard to the proposed appointment of Rosa María García Piñeiro as a new independent director, she has informed the company of her decision not to accept said appointment, having been informed of the intention of the SEPI (State Industrial Ownership Corporation) to vote against it. Indra’s Board of Directors will proceed to appoint a new independent director by co-optation on the motion of the Appointments, Remuneration and Corporate Governance Committee.