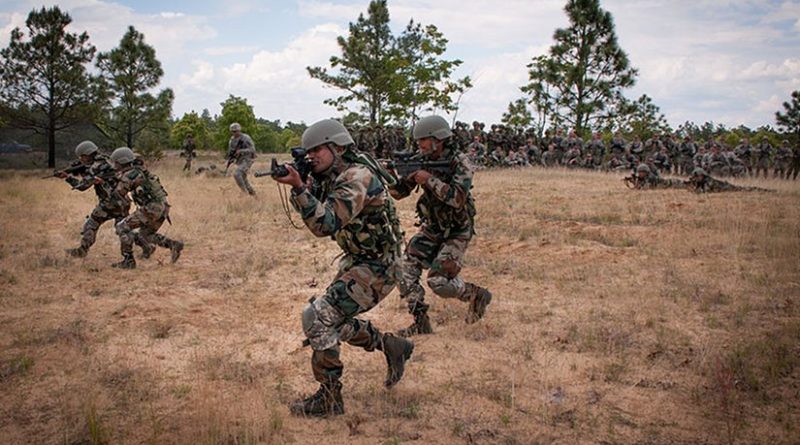 My teacher says, “A soldier who thinks that he is designed to kill in today’s fourth generation war (4GW) makes a poor professional”. The incessant blunders by armed forces in Kashmir or Northeast India reveal the non-professional approach of Indian soldiers/policemen. It goes without saying that, soldiering/policing today is not just neutralising the enemy, but encompasses safeguarding lives of citizens and changing anti-national perceptions by building bridges of peace and harmony. While chasing the enemy amidst public presence, I feel, even if the target escapes, professionalism dictates that, the target should be let go to save innocent lives, than trying to neutralise the target, with assured collateral damage.

The Ramban incident (July 17, 2013) in Jammu and Kashmir State of India in which some unarmed protesters were killed, and many others injured, by the Border Security forces (BSF) under the garb of self defence, points towards non-professionalism of the BSF. It also reflects on their inability to avoid crisis in 4GW and to manage a crisis, once created. The incident is not the first of its kind, but a continuum of State violence has been perpetrated since the inception of armed conflict in 1989. Lately, the infamous Amarnath Land Row, (2008), The violent unrest of 2009 (Shopian Double rape and Murder case row) and Machil Fake encounter Row in 2010 and now in 2013, the security forces have displayed ample examples of un-professional crisis creation and crisis mishandling, leading to a greater trust deficit and publics ‘enemy’ percept about the armed forces. The incident which happened at Ramban, must be probed fairly, both by the State Government and the armed forces themselves, so that the culprits are brought to justice without any delay. Merely eyewash of probes or hallow/pre-decided Court of Inquiry (CoI) by forces themselves just won’t suffice.

Simultaneously, the Centre must pay special attention to the issue so that, public sentiments are respected at least once in the history of Jammu and Kashmir and negative perception repaired. In addition, the allegation on BSF having desecrated the holy Qura’an and beaten the Imam (prayer leader) must be investigated and if someone is found guilty, the forces should display their sense of justice to the public by stringent action against the errant troops. In case it was a rumour aimed at inflaming the violence further, the rumour mill must be exposed and acted against too. After all, a soldier/policeman who does not respect local sentiments, is hardly worthy of his uniform, and a citizen willing to sabotage peace is not worthy of his citizenship. I do acknowledge the fact that, soldiers/policemen are vulnerable to adverse mechanisations/ propaganda in 4GW. It’s time the armed forces realise this, and began to cater for it in their strategy and drills. Innocent people also should be made aware of the need to avoid instigating violent response from forces, based on radical instigators. Simultaneously security forces must improve and enhance their peace keep ability that currently seems awfully poor.

Seeing the saga of state tyranny and unaccounted killings, it is obvious that the country is losing the 4GW in Kashmir. Ramban like retrograde steps, lead to prospect of peace created by developmental measures by the Centre and the state government, investment of some visionary military leaders, etc, going astray. Kashmir is a place where peace gets endangered with every new incident of State violence. Such incidents pull the society back into turbulent times, thereby, burying peace initiatives of all especially initiated by the forces (like Army’s Sadbhavana and other range of sincere public services).

Amid this saga of professional slip-ups and dread of state terror, certain questions storm the mind. Firstly, what is the relation between the impunity to armed forces (under AFSPA) and their aberrations/collateral damage? Also do forces take shoot to kill very easy and as the very first step to suppress the dissent simply because of the impunity they enjoy? Secondly, are the forces in Kashmir really so visionless/ leaderless or, is there is a serious communication gap amongst the various security agencies, leading to crisis creation and crisis mis-handling, time and again? Thirdly, and most importantly, are the troops combating 4GW, trained to execute collateral free operations and to remould anti-national perceptions? Fourthly, do such unethical and unfriendly actions of un-trained and un-educated soldiers/policemen lead the public to question the genuineness of intentions of the forces in winning peace or resolving the conflict? Fifthly, are the soldiers/ policemen actually ‘thinking’ 4th generation warriors or are they merely a man-machine combination designed to kill, and kill alone (typical Rashtriya Rifles or Special Task Force psyche)?

Lastly, beyond expression of a ‘deep concern’ or ‘regret’, what is the intelligentsia and leadership of the armed forces doing to curb such incidents, and what is their take on repeated sabotaging of peace by killing of innocents? The questions clogging a common Kashmiri’s mind are endless, however, with no answers from any side till date.

The armed forces need to holistically evaluate their strategy and standard operating procedures in all conflict zones of the Nation and get better trained to win this both externally abetted and internally nourished 4GW. Generals and soldiers/ policemen have to un-learn their violent ethos, and learn to treat people of conflict zones with respect and as fellow citizens. Also there must be a joint venture amongst the armed forces/agencies for sensitising soldiers/policemen about local culture, religious sensitivities, respect towards the sacred and community ethos, so as to help them reduce their own vulnerabilities, remould perceptions and ultimately win peace.

The fact remains that our armed forces as specific organisations need to rethink of their intervention in conflict zones like Kashmir. At the moment the image of the forces is not so praiseworthy in the eyes of the common Kashmiri, that needs a serious repair and policy intercession. They have also to realise whether they are really winning the fourth generation war in Kashmir or simply killing their time and innocent people in the name of collateral damage only. Their unashamed and nonstop crisis mishandling reminds me of a momentous couplet by veteran bollywood lyricist Shailendra;