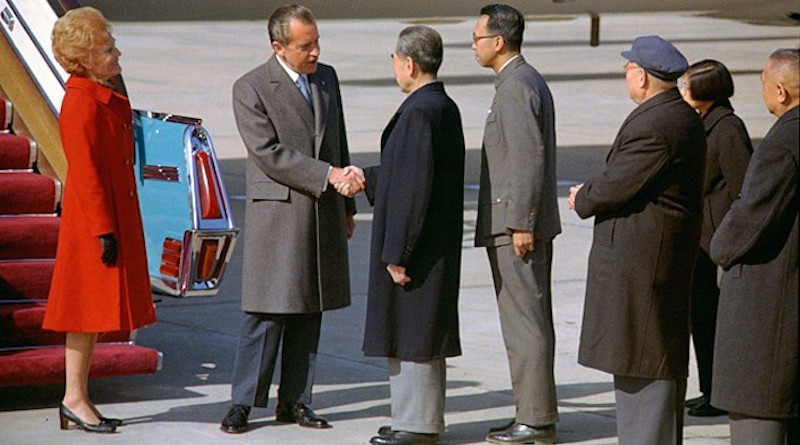 There is little doubt about it.  US Secretary of State Mike Pompeo is the puffed-up hawk of the Trump administration, talons at the ready, beak protruding. While the president coos at the prospect of seeing, or admiring, the next strongman of international relations, Pompeo hovers over selected authoritarian targets.  This Jekyll-Hyde appraisal of foreign policy is a ready recipe for chaos and one that has done much to confuse Washington’s friends and foes.

The largest authoritarian target for the Trump administration remains China.  China is convenient; China is destiny.  The US imperium has always needed, on some level, handy demons to justify vast military budgets and its sprawling network of military bases.  Lacking enemies would naturally lessen the case and show up the jingoes as men and women of straw.  When the Soviet Union vanished, ending the most expensive, phoniest confrontation in modern history, the rogues’ gallery suddenly seemed empty, largely because many of those rogues were sponsored or backed by the US imperium.  This was a time ludicrously called the “end of history” by that most fatuous of political observers, Francis Fukuyama.  But candidates of wickedness were eventually found: President George W. Bush’s “axis of evil”, born in the embers of New York’s World Trade Centre; the shop-for-terror al-Qaeda network; a miscellany of terrorists.

Pompeo’s speech, delivered at the Nixon Library in California on July 23, was a dusted off version of innumerable statements made during the Cold War, notably in its initial freeze.  The capitalist and communist blocs had taken shape, and the language of freedom was much in use.  On March 12, 1947, President Harry Truman appeared before a joint session of Congress to explain why the United States should care whether Greece or Turkey should fall to communism or not.  Turkey was “freedom-loving”; the Greeks were “threatened by the terrorist activities of several thousand armed men, led by communists”.  Both countries needed aid – in the order of $400 million.

In justifying his position, Truman laid out what would become the doctrine that bore his name.  “I believe that it must be the policy of the United States to support free peoples who are resisting attempted subjugation by armed minorities or by outside pressures.”  He was adamant that “[t]he free peoples of the world look to us for support in maintaining their freedoms.”

Now, the communist Asiatic demonology has shifted, finding form in the Chinese state tinged yellow and red.  According to Pompeo, battle cries are needed, a good stiffening of the sinews.  “It’s time for free nations to act.  Not every nation will approach the China challenge the same way, nor should they. Every nation will have to come to its own understanding of how to protect its national security, its economic prosperity, and its ideals from the tentacles of the CCP”.

There was no small measure of irony in the fact that Pompeo’s speech was made at a library named after the US president that insisted China be engaged as part of a policy that came to be known as détente.  During that period, the Soviet Union was, within limits, tolerated.  The PRC was brought in from the cold.  President Richard Nixon, the greatest ideological shape changer of the Cold War, was happy to hunt communists actual and fictional in domestic politics just as readily as he was to accommodate them in foreign policy when it suited.

Pompeo called Nixon “a brilliant student of China, a fierce cold warrior, and a tremendous admirer of the Chinese people, just as I think we all are.”  But, he urged, “We must admit a hard truth that should guide us in the years and decades to come, that if we want to have a free 21st century, and not the Chinese century of which Xi Jinping dreams, the old paradigm of blind engagement with China simply won’t get it done.  We must not continue it and we must not return to it.”

The Trump administration’s tweet and sound bite understanding of history is incapable of understanding accommodation of the Nixon sort.  This is the Bogeyman reading of discomfited imperialists, all adolescent and power point.  “We imagined engagement with China would produce a future bright with the promise of comity, and cooperation,” Pompeo spoke with resignation.  “But today we sit wearing masks and watching the pandemic’s body count rise because the Chinese Communist Party (CCP) fail in its promises to the world … reading news headlines of repression in Hong Kong and Xinjiang … seeing staggering statistics of Chinese trade abuses that cost American jobs and strike blows to our companies … watching the Chinese military grow stronger and more menacing.”

Pompeo’s rhetorical questions to his audience merely served to illustrate an encyclopaedic ignorance, matched only by its colossal naiveté.  “What do the American people have to show now 50 years on from engagement with China?  Did the theories of our leaders that proposed a Chinese evolution towards freedom and democracy prove to be true?  Is this China’s definition of a win-win situation?”  Arrogant, even dotty questions, but typical of a superpower finding its crown of hegemony a bit loose, an increasingly poor fit.  To engage China was to only do so on US terms.  China should have, to use that irritating sporting metaphor, “played ball”.  More money somehow makes one freer, a claim nonsensical in its envisaging, and disproved by historical examples such as the Chile of Augusto Pinochet.

The questions posed by Pompeo merely serve to justify the US case for encircling China, a measure that will only serve to divide, not unite, nation states, and titillate eager war mongers.  It will also put Washington’s allies in a damn awful mess.  But this will not bother the think tankers in countries such as Australia, where deputy sheriffing is not only natural but deemed necessary.  Into the breach they go, folly-ridden.

One thought on “Revisions On China: Abandoning The Nixon Legacy – OpEd”