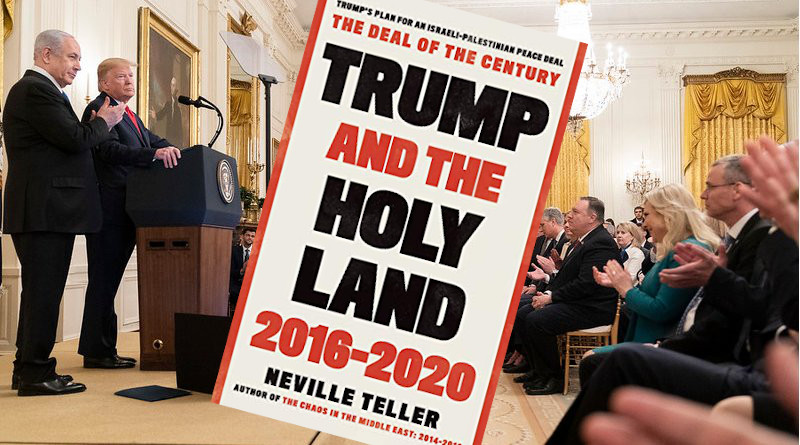 Meticulously researched and written by Eurasia Review’s Middle East correspondent, Neville Teller, ‘Trump and the Holy Land: 2016-2020’ is the only full account of President Donald’s Trump’s bold effort to deliver a plan for Israeli-Palestinian peace. Tracking and analyzing everything from inception to unveiling, Teller examines the plan from both a geopolitical and humanitarian perspective, ultimately begging the question – what will be the eventual fate of the “deal of the century”?

On January 28, 2020, President Donald Trump stood next to Israeli Prime Minister Benjamin Netanyahu and unveiled his plan, officially titled “Peace to Prosperity: A Vision to Improve the Lives of the Palestinian and Israeli People”.

Known to most as the “Deal of the Century”, it was a bold plan to achieve Israeli-Palestinian peace, something first announced by Trump during his presidential campaign. Since its inception, writer and correspondent Neville Teller has been tracking its every move.

For the first time, the entire deal and its journey have been chronicled in a book. ‘Trump and the Holy Land: 2016-2020’ has been four years in the making; the product of thousands of hours of research, writing and analysis.

‘Trump and the Holy Land: 2016-2020’ is the history of that effort. Starting with pledges Trump made during his presidential election campaign, it traces the development of what he termed “the deal of the century” from its inception to its final unveiling on January 28, 2020.

The account of its evolution is set against the backdrop of a turbulent Middle East including such seminal events as Trump’s recognition of Jerusalem as Israel’s capital and his relocating the US embassy there. These, and much more, provide the setting for the slow emergence of the peace plan – events such as the defeat of the Islamic State caliphate, Trump’s withdrawal from the Iranian nuclear deal, the centenary of the Balfour Declaration, and the discovery of vast gas and oil reserves in Israeli waters.

The story of the origins, the development, and the unveiling of the “deal of the century” can be seen and judged effectively only within the context of the ever-shifting political kaleidoscope. ‘Trump and the Holy Land: 2016-2020’ does just that.

“From the day Trump made his announcement, all the way back in 2016, I decided to follow his progress,” explains the author, who has been writing about the Middle East since the 1980s.  “Of course, like most, I was particularly intrigued by the self-proclaimed expert deal-making skills of Trump himself.  Tying up the Israel-Palestine problem would be no small task, but whether Trump’s plan proves to be the template for a solution or is fated to be shoved aside and lost in the long grass of history – well, all that is in the lap of the gods.”

Continuing, “This book covers the four tumultuous years in granular detail – examining things from a multi-disciplinary perspective and without an agenda. It’s actually my fourth book on the Middle East, a region that has taken me well away from my native UK and into a part of the world that is as fascinating as it is unpredictable.”