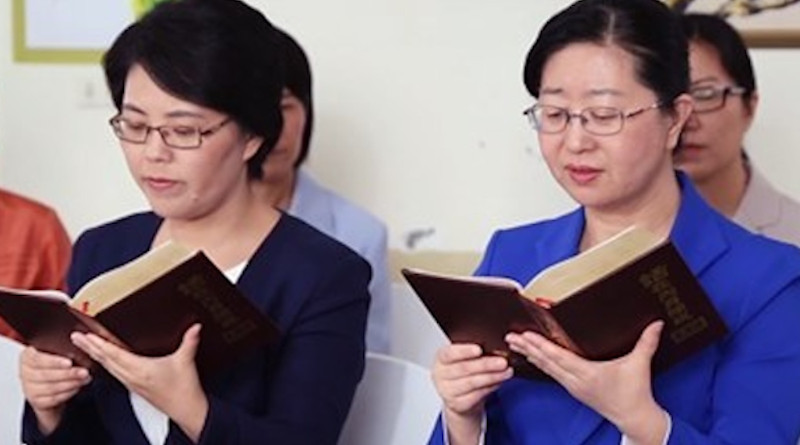 A picture of women praying posted on the Facebook page of the Church of Almighty God. (Photo: Facebook)

Church leaders in northeastern India’s Nagaland state are concerned about a Chinese Christian cult misleading thousands of their young people with faulty doctrines.

The Church of Almighty God, which emerged in China some three decades ago, teaches that a woman named Yang Xiangbin is the second Christ.

The cult is “reportedly making inroads into our land,” said Reverend Zelhou Keyho, general secretary of the Nagaland Baptist Church Council (NBCC), in a letter to all church bodies and Baptist leaders in the state.

The cult “is a well-organized group, aggressively moving forward with publication and creating many Facebook pages and colorful artwork that appears biblical and enticing,” said the letter of Reverend Keyho.

The cult claims that God is speaking through Yang, whose “utterances are written in their books as revelations from God and they are being published and promoted through books, videos, computer-generated movies, artwork and other forms of media,” the letter said.

The council is the top body of nearly 1,500 Baptist churches in Nagaland, where Christians form 90 percent of two million people. The majority of Christians are Baptists.

Naga Baptist leader Y.Z. Ovung of Lotha Baptist Church told UCA News that the “episode is disturbing as a wrong Christian doctrine is being spread. They are luring youths through online measures and promising facilities and electronic gadgets,” he said.

He said young Naga people are “easily vulnerable to such misleading campaigns. Some are Christians just because they are born into Christian families. They hardly know the real Christian values and doctrine,” he said.

Ovung wants the government to pay attention to the issue and said: “This is an ideal case of absolute misuse of modern technology. The government needs to be careful as such platforms could be abused to spread violence.”

The cult’s Facebook page has some 137,000 followers. They claim to have offices in the US, UK, South Korea, Canada, Australia, New Zealand, Hong Kong, Germany and France.

However, there are no offices in Nagaland or in any other parts of India.

One thought on “Chinese Female Jesus Worries Baptists In India”