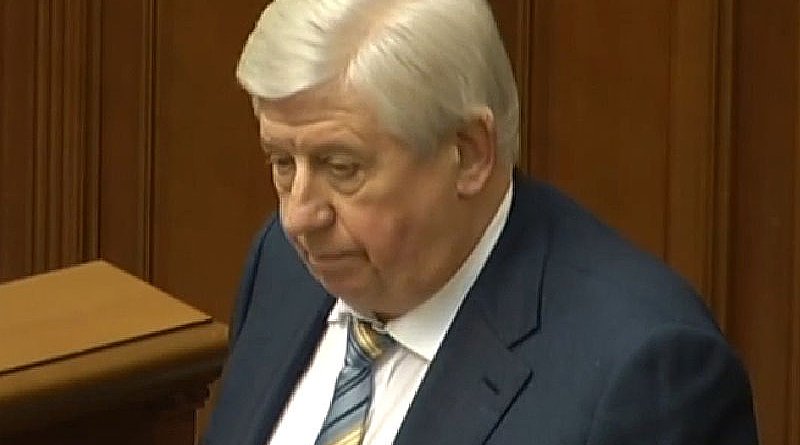 (RFE/RL) — When Viktor Shokin was fired as Ukraine’s prosecutor-general in March 2016, after less than 14 months in the post, it was seen as a crucial development in a country under pressure to curb corruption and get serious about reforms. Now Shokin’s dismissal, and Ukraine itself, are at the center of a political whirlwind in Washington that is buffeting Donald Trump’s presidency and playing into the 2020 White House race.

Here is a look at the arguments, facts, and evidence in the dispute pitting Trump against former Vice President Joe Biden, a front-runner for the Democratic nomination to challenge the incumbent in the election next year.

Trump and his allies, including his personal lawyer, Rudolph Giuliani, the former mayor of New York, accuse Biden of using his position as vice president and point man on relations with Kyiv in 2016 to help Burisma — a Ukrainian energy company that was paying Biden’s son Hunter, who was on its board of directors — avoid damage from a criminal investigation.

They assert that Shokin was overseeing an active criminal investigation into Burisma, where Biden’s son was on the board, and that Biden at the time told Ukrainian President Petro Poroshenko that the United States would withhold $1 billion in loan guarantees unless Shokin was fired.

But Ukrainian prosecutors and anti-corruption activists with knowledge of the matter argue that the timeline of developments in the Burisma case and Shokin’s stint as chief prosecutor simply does not fit the narrative being put forward by Trump and his allies.

Moreover, they say that Shokin himself was the biggest obstacle standing in the way of the investigation.

Trump and his allies have repeated their claim in recent days, amid reports that the U.S. president pressured Ukraine’s new president, Volodymyr Zelenskiy, to open an investigation into the Bidens during a July 25 phone call that is now at the heart of an extraordinary whistle-blower complaint from a U.S. intelligence official.

The call came as Kyiv was awaiting approval of almost $400 million in Pentagon and State Department military assistance for Ukraine, which is fighting Russia-backed separatists who hold parts of two eastern provinces in a still-simmering war that has killed more than 13,000 people since April 2014.

Citing three unnamed senior U.S. administration officials, The Washington Post reported on September 23 that Trump had told his acting chief of staff at least a week before the call to hold the assistance package because he had “concerns” about how the money would be used.

The New York Times, also citing unnamed senior administration officials, reported that Trump did not discuss the delay in assistance in his call with Zelenskiy.

Suggestions that Trump and allies such as Giuliani pressured Zelenskiy and his administration to investigate Biden — whether or not a direct quid-pro-quo was proposed — have led to mounting calls from Democrats for the impeachment of the U.S. president.

Trump has pushed back, at one point citing remarks in which Ukrainian Foreign Minister Vadym Prystayko told Ukraine’s Hromadske TV that he does not think “there was pressure” from the U.S. president in the phone call.

“The Ukrainian Government just said they weren’t pressured at all during the ‘nice’ call,” Trump tweeted late on September 22, a day after the Hromadske report. “Sleepy Joe Biden, on the other hand, forced a tough prosecutor out from investigating his son’s company by threat of not giving big dollars to Ukraine. That’s the real story!”

Biden did demand that Shokin be sacked. At an event at the Council on Foreign Relations in New York in 2018, Biden seemed to boast about it, saying that during a visit to Kyiv — likely in December 2015 — he told Ukrainian officials: “We’re leaving in six hours. If the prosecutor’s not fired, you’re not getting the money.”

Shokin was indeed fired, but not until March that year.

However, there are two big problems with the narrative presented by Trump and Giuliani, according to activists in Ukraine and others.

For one thing, Ukrainian prosecutors and anti-corruption advocates who were pushing for an investigation into the dealings of Burisma and its owner, Mykola Zlochevskiy, said the probe had been dormant long before Biden leveled his demand.

Activists say the case had been sabotaged by Shokin himself. As an example, they say two months before Hunter Biden joined Burisma’s board, British authorities had requested information from Shokin’s office as part of an investigation into alleged money laundering by Zlochevskiy. Shokin ignored them.

Kaleniuk and AntAC published a detailed timeline of events surrounding the Burisma case, an outline of evidence suggesting that three consecutive chief prosecutors of Ukraine — first Shokin’s predecessor, then Shokin, and then his successor — worked to bury it.

“Ironically, Joe Biden asked Shokin to leave because the prosecutor failed [to pursue] the Burisma investigation, not because Shokin was tough and active with this case,” Kaleniuk said.

Ukrainian prosecutors have described no evidence indicating that Biden sought to help his son by getting Shokin dismissed — and have suggested that they have not discovered any such evidence.

But there is a long list of Western organizations, governments, and diplomats, as well as Ukrainian anti-corruption groups, that wanted to see Shokin fired.

They include the International Monetary Fund, the European Union, the U.S. government, foreign investors, and Ukrainian advocates of reform.

In a column published days after Shokin was fired in March 2016, Anders Aslund, a senior fellow at the Atlantic Council in Washington, wrote that his dismissal came as no surprise.

“The amazing thing is not that he was sacked but that it has taken so long,” Aslund said. “Petro Poroshenko appointed Shokin to the role in February 2015. From the outset, he stood out by causing great damage even to Ukraine’s substandard legal system.”

3 thoughts on “Why Was Ukraine’s Top Prosecutor Fired? Issue At Heart Of Dispute Gripping Washington – Analysis”