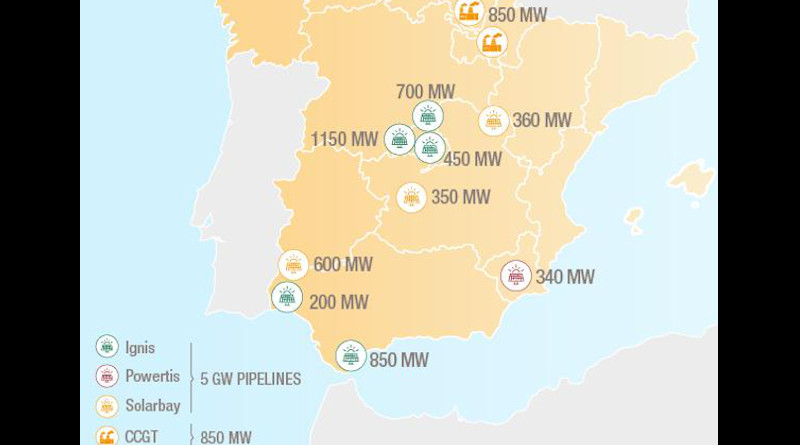 Total said Friday it is strengthening its presence in the Spanish electricity market through an agreement with the Spanish developer Ignis to develop 3.3 gigawatts (GW) of solar projects located close to Madrid and Andalusia. The first projects in the Ignis portfolio are scheduled to start in 2022, with the ambition of bringing them all into production by 2025. Remuneration will be paid by Total to Ignis as the projects develop.

This transaction follows the two agreements signed in February 2020 with Powertis and Solarbay Renewable Energy to develop nearly 2 GW of solar projects; and the acquisition last May from Energias de Portugal of its portfolio of 2.5 million residential customers and two gas-fired combined cycle power plants (850 MW).

This operation brings to more than 5 GW its portfolio of solar projects under development in Spain by 2025 and positions the Group as a major player in the country’s energy transition, contributing to Spain’s ambition to generate 70% of its electricity from renewables by 2030 and then 100% by the middle of the century.

This solar power portfolio will enable the Group to cover all the electricity consumption of its industrial sites in Europe by 2025: to do this, the Group will purchase nearly 6 TWh per year of green electricity generated by its Spanish solar sites through a power purchase agreement covering more than 3 GW of solar farms. This will be the largest corporate PPA in the world. Thanks to its electricity trading capabilities, the Group will thus be able to supply all its European sites with competitive green electricity, in line with its objective of carbon neutrality. Scope 2 greenhouse gas emissions will thus be reduced by almost 2 million tonnes per year.

“Total is becoming one of the main broad-energy players in the country by intervening both in the production of renewable and gas-based electricity and in the distribution of gas and electricity. Our ambition, first and foremost, is to provide a clean, affordable electricity offering to our residential customers in Spain. Spain is a priority country for Total in Europe and we fully intend to leverage the market’s growth opportunities that the country offers to respond concretely to the challenges of the energy transition towards carbon neutrality.,” said Patrick Pouyanné, Chairman and CEO of Total.

“This decision to invest massively in renewable electricity capacity to supply all our industrial operations in Europe with green energy is concrete proof of our decision to move towards decarbonising our European operations in line with our new climate ambition. It also demonstrates the value of integrating production, trading and sales in the electricity chain.”

As part of its ambition to become the responsible energy major, Total is building a portfolio of low-carbon electricity operations, with the objective of seeing them account for 40% of its sales mix by 2050.

Today, Total said its gross low-carbon power generation capacity is close to 9 gigawatts, of which more than 5 gigawatts from renewable energy sources. In pursuit of its ambition to increase this figure fivefold by 2025, Total intends to continue developing its activities to become one of the leading players in renewable energies worldwide