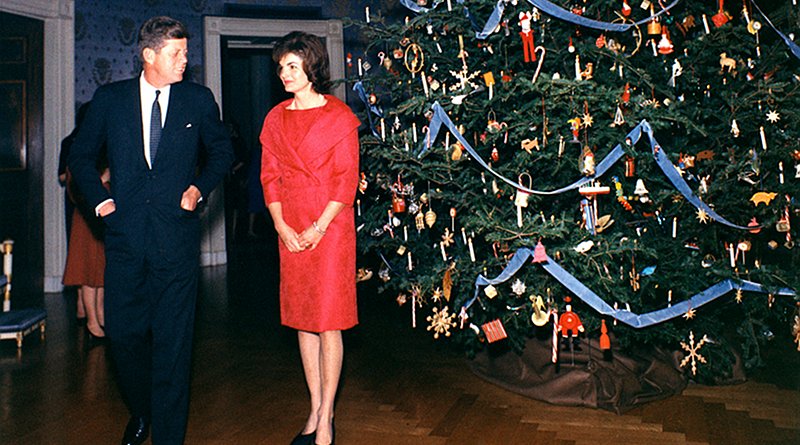 It’s almost Christmas time again, and that means its time for White House politicians and staff to spend hundreds of thousands of dollars on Christmas decorations and events for the White House.

Parties and pricey decor have, unfortunately, become “tradition” at the White House where the holiday season has become an excuse for the staffs of the White House and the first lady’s staff to put on a wide variety of “social” events which are really just public relations junkets.

The fact it’s all just PR has been emphasized this last week as the White House has sent out a series of tweets about the volunteers who have been putting up decorations at the White House, and helping out with other activities designed to make the “low information voters” think the sitting president — whoever that may be — is a fun and relatable fellow.

One example of this is the “pardoning” of the Thanksgiving turkey. Another is the NORAD ” Santa Tracker .” The latter is a PR stunt designed to make NORAD — a Cold War organization designed to help the US government wage nuclear war on women and children — look cutesy and harmless.

When it comes to decorating the White House, it turns out the decorations require more than 100 volunteers ” to help tie ribbons, set up lights, hang ornaments, and much more! ” The decorations are the usual excess we’ve come to expect from Washington, DC. This year the decorations include 58 Christmas trees and more than 2,500 strands of lights. Not surprisingly, there seems to have been inflation in the number of Christmas trees “necessary” for the White House. The George W. Bush administration used 27 trees in 2008, and the Clinton Administration used 36 trees in 1997.

The decorations, of course, will never be experienced, seen, or enjoyed by the overwhelming majority of Americans. The White House has never been “the people’s house” in spite of rather implausible claims of it being so. The modern White House is primarily a place of business of the very powerful and very wealthy.

Thus, the Christmas decorations will function primarily to enhance social events put on the White House for VIPs, donors, lobbyists, and other members of the ruling class. These events are very costly, although since they are basically fundraising events, the cost of the events themselves must be paid for by the president himself, or by his political party.

According to ABC, for example, “the Democratic National Committee spent an average $1 million every year of President Barack Obama’s second term for social events at the White House during November and December — money mostly spent on catering, food and beverages, according to filings reviewed by ABC. “

The Common Denominator: The Office of the First Lady

People who know how government schemes work know there is no way these events are fully funded by private individuals or public parties. Yes, the catering and the physical decor is often funded by private sources, but much of the planning, organizing, decorating, and scheduling of these PR activities is done by federal employees, including those who work for the Office of the First Lady.

Indeed, the Office of the First Lady nowadays has a budget or around 1.5 million dollars, covering about twenty employees. These jobs do not exist to perform any actual service, produce any good, or do anything other than operate a public-relations operation for the president.

It is time the whole operation be abolished.

Three Reasons to Get Rid of the First Lady

One: It exists for purely political reasons.

As the Christmas parties show us, the social function of the first lady’s office is one designed to raise funds for the the president’s party, and to reward important donors and political allies. In other words, the institution that is the first lady is a purely political one.

The programmatic aspects of the first lady’s “work” are even worse. Whether she’s pushing healthy school lunches or telling people to “just say no,” the first lady’s initiatives usually involve meddling in local government, pushing for more government control of people’s lives, or just generally insinuating the federal government even more into the daily lives of ordinary people.

Two: The Office of the First Lady culturally elevates the presidency (and that’s a bad thing).

This phenomenon applies to the entire concept of the first lady, although the existence of a government office devoted entirely to the first lady certainly makes things worse.

The very idea that the spouse of the president is an important public figure is in itself troubling. Both the Office and the media coverage of first ladies contributes to this problem. The media coverage of the first lady’s clothing, her travels, and her family affairs all contribute to the idea that presidents are important national figures above and beyond their mere professional duties. In monarchies, for example, the families of monarchs are regarded as important national institutions. Royals are regarded as important trend-setters and cultural touchstones for the nation.

Bizarrely, American presidents often receive similar treatment. This perhaps reached its most objectionable form in the “Camelot” myth during the Kennedy years, but it persists today. We’re supposed to care about what sort of dog the president has and what sorts of furnishings the presidential couple has bought for the White House. The “first family” is regularly on the news, and we’re encouraged to view presidential families as a facsimile of a royal family. Modern presidents and first ladies often walk around holding hands, and generally playing the part of happy couple — most likely as part of an attempt to impress the more gullible among their supporters.

The Office of the First Lady makes this worse by keeping the first lady in the public eye and giving the impression that the president’s spouse ought to be regarded as something meaningful or important.

In fact, the spouse of the president ought to be ignored. She should have zero taxpayer funded staff. She should have no programs, no initiatives, no social calendar, and no public appearances unless  as part of her own separate career or paid for with her own private funds.

Naturally, in the future, when the US gets a “first gentleman,” the same standard should be applied to him.

We’ve certainly come a long way from the days when the president and his household were expected to fund decorations, events, and travels. In the nineteenth century, :

Presidents were expected to live on the salary Congress voted them; no additional moneys were offered for most of the nineteenth century. This meant that all state entertainments, public receptions, formal dinners, and the like were the President’s financial responsibility, as were the staff of servants in the White House, transportation, medical care, additional office help beyond that provided by the government, office supplies, and—to some extent—the furnishings of the White House. Congress from time to time made funds available for redecorating and refurbishing the Presidential mansion, but most of the limited money provided was expended on the public rooms. The Presidents supplied the rest. As late as 1945, when the Trumans moved in, the private quarters, according to young Margaret, resembled “a third-rate boarding house.”

This attitude followed the dominant thinking on political spending during the nineteenth century. If presidents were engaged in anything that could be construed as something other than his official duties, he was to pay for it himself. Thus, when president elect Grover Cleveland took a train to his inauguration in Washington, DC, it was paid for by the Democratic Party. In 1887, when Cleveland planned a tour of the United States, “All expenses, including those of his guests, were paid for by Cleveland out of personal funds.”1

More fiscally-minded presidents during the nineteenth century were loath to blow the president’s salary on opulent receptions and parties. According to historian Robert Watson, the White House in the early years featured “limited staff, few amenities, and little consideration of family living accommodations and necessities.” Early first families, Watson notes “often experienced a decrease in their standard of living by moving into the executive mansion.”2 Abigail Adams used the East Room to hang laundry to dry. Later, due to the troublesome nature and high cost of White House events, the social calendar often was reduced to a minimum. Watson reports that under Martin Van Buren, the White House “offered almost no entertaining.”

Needless to say, this sort of financial prudence disappeared from the White House decades ago. In the 1930s, Eleanor Roosevelt still had a staff of only two people. But by the 1970s, the nation apparently was in dire need of dozens of people to tend to the first lady.

I have no doubt these government jobs come in handy each year for putting on parties for rich donors and other friends of presidents. But all these people — including the first lady herself — should be forced to get real jobs as soon as possible.

Home » Abolish The Office Of The First Lady – OpEd