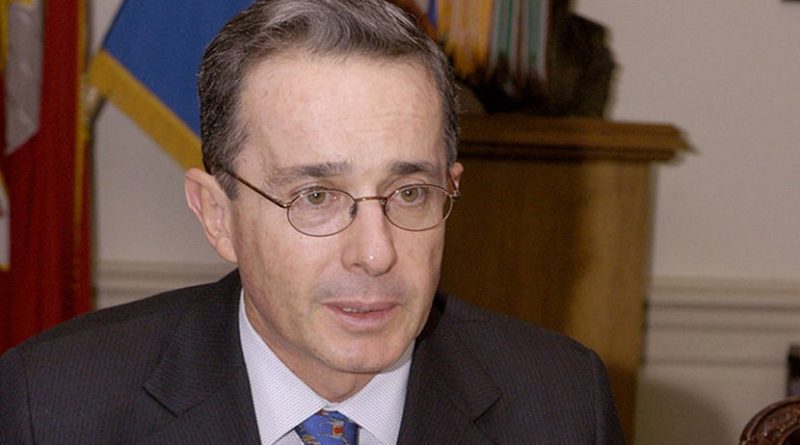 Former Colombian President Álvaro Uribe is being investigated by the country’s chief prosecutor’s office forhis connection to the hard line United Self-Defense Forces of Colombia (AUC), aright-wing paramilitary group that for years had operated in Colombia. The AUC is on the U.S.terrorist organizations list and has been accused of drug-trafficking. The preliminary probe was made public by Uribe’s attorney on January 8, 2013. [1]

The probe comes nearly a month after the sentencing of the former Colombian army general Mauricio Santoyo for providing material support and resources to the AUC. While Santoyo was being held under custody by U.S. authorities, Uribe persistently deniedanyconnection to the general;this was despite theallegation that Uribe personally appointed Santoyo as his presidential security officer. The reported connection betweenthe two men may be used by the prosecutor’s office in the case against Uribe, as it implies a direct connection between Uribe, Santoyo and the AUC.

After Santoyo’s sentencing, COHA pointed out possible implications for Uribe, due to the information the former general likely divulged to U.S. authorities during his trial.This article analyses the political motivations in Colombia that surround the newest allegations against former President Uribe.

The preliminary probe is based on accusations made in 2011by the Colombian Congressman Ivan Cepeda, a member of the opposition left-wing party Alternative Democratic Pole (PDA). The politician accused Uribe of creating a far-right guerrilla group that allegedly utilized his ranch in the department of Antioquia as a base forits operations.[2] Additionally, the leftist Congressman claimedthat the guerrilla group was responsible for the killing of suspected rebel sympathizers

From 1995 to 1997 Uribe was the governor of the department of Antioquia,the second most populous state in Colombia. In 1997, as a governor of the Antioquia, Uribe publicly stated that there had been an alarming rise in guerilla and drug-trafficking related violence within Antioquia and that the harrowing situation invested him with the responsibility to increase the involvement of the state’s military to counter the ongoing onslaught. [3]

While governor, Uribe also created the “Security Associations CONVIVIR”, an organization that encouraged local communities to help the government monitor the location and operations of guerrillas and drug-traffickers.[4] Per Contra, the Inter-American Commission on Human Rights of the Organization of American States, covered CONVIVIR extensively in its 1999 report on Colombia. Among other facts, the report concluded that CONVIVIR had“sometimes acted in a manner which is not compatible with international humanitarian law.”[5] Furthermore, the report described the massacre of ten people in the department of Antioquia in August 1997, and alleged that CONVIVIR was responsible for the killings. Since then, the organization has been accused of additional human rights violations and has been linked to multiple extra-judicial killings.

The current accusations against Uribe include testimonies from various witnesses who claim that during his time in office as the governor of Antioquia, he created and supported a far-right wing military group, which operated from his ranch in Guacharacas, Antioquia. Those testifying against the ex-president include two former members of the paramilitary group: Pablo Hernan Sierra and Juan Guillermo Monsalve. The father of the latter witness had been the administrator of Uribe’s ranch.

There is much speculation surrounding these accusations and the various motives behind them. A closer examination of the bitter confrontation between Uribe and current President Juan Manuel Santos shows some of the political undercurrents of the controversy.

The row between Santos and Uribe stems from current President’s adoption of a different strategy in the country’s ongoing conflict with the Armed Revolutionary Forces of Colombia (FARC), the violent left-wing group that has been terrorizing Colombia for decades and which is responsible for of the murder of Uribe’s father. Uribe, while president from 2002-2009, took a hard line militaristic approach towards the leftist guerrillas, similar to the strategy of the former Mexican President Calderon.  Santos, who was the minister of defense under Uribe, was elected in 2009 on a platform of continuing his predecessor’s firm policy against drug-trafficking and guerrilla violence. However, upon entering office, Santos has tempered his campaign promises and Uribe’s strategy, and is instead working in another direction to end the conflict. The country, behind the leadership of Santos, is currently engaged in peace talks with FARC. The leftist guerrillas had pledged to a two-month cease-fire, which ended on January 20. This most recent cease-fire was unilateral, as throughout the peace negotiations the government chose not to position the guerrillas in an advantage and repeat the mistakes of 2002.

The increasingly bitter conflict between Uribe and Santos is publicly evident on the former president’s Twitter page, where he often denounces the accusations made against him. For example, on January 8, shortly after the investigative probe was made public, Uribe posted that the “accusations are coming from manipulated prisoners” and are “not verified.” [6]

It is still unclear whether these accusations will lead to prosecution. Nevertheless, Uribe still enjoys the widespread popularity and the support of a large sector of Colombian society. The controversy should be considered in the context of the country’s upcoming Congressional elections in early 2014, when Uribe will most likely run for a Senate seat (the Constitution prevents him from running for a third time for the executive office). [7]

As it is common in politics, many point out the possibility that the entire scenario is designed as a political retaliation against Uribe in order to diminish his chance of election in the Senate. Regardless of this possibility, they have in fact sufficiently damaged both his image and credibility, as it most likely was meant to. Every person should be presumed innocent until proven guilty; nevertheless, it is not the first time doubts have been raised about the ethics and legality of Uribe’s policies while in office.

Darya Vakulenko, Research Associate at the Council on Hemispheric Affairs