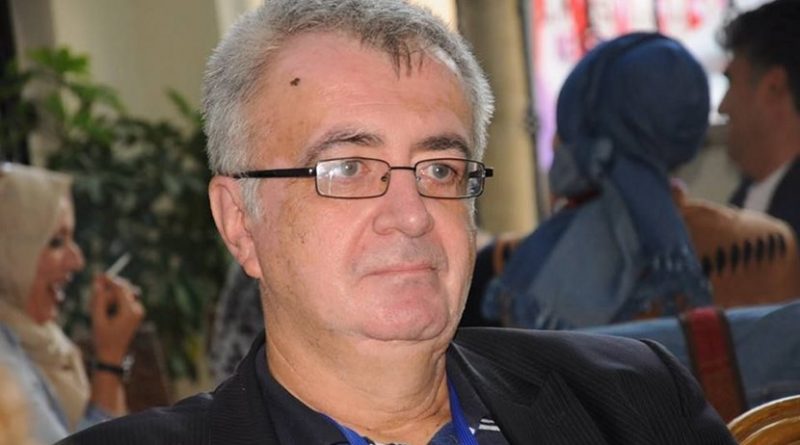 Assoc. Prof. Dr. & Dr. Honoris Causa Sabahudin Hadžialić delivered a keynote address on February 21, 2020 in a book promotion event and international scientific conference on the occasion of 28th anniversary of the Khojaly Genocide in Azerbaijan, a crime against humanity committed by the Armenian Armed Forces on February 26, 1992, inside the sovereign territory of the Republic of Azerbaijan.

Furthermore, H. E. Dr. Eldar Hasanov, Ambassador Extraordinary and Plenipotentiary of the Republic of Azerbaijan to Bosnia and Herzegovina, Republic of Serbia and Montenegro (resident in Belgrade), was a keynote speaker of this premier international scientific conference.

This conference was held in the International University of Sarajevo; and the book was written by Mrs. Sariyya Muslumgizi, entitled: “The Children That Did Not Grow Up.”

The following is an excerpt of a statement delivered by Prof. Hadžialić:

The memory is eternity. They were ages from 4 to 18. Their life was opening for them, but they have disappeared in the memory. For the eternity. Both, ours and as well as – theirs.

It is because of the shaping of the assumptions that mark the eternity of global suffering solely because of the fact that another and different one is the enemy who needs to disappear, without the possibility of finding a compromise, the little people – the children of Azerbaijan have become gigantic, never got over personalities who just walked through the initial creation, creating the path of life, but …

Where there is no communication with each other, the possibilities arise first of verbal and then of physical conflict, regardless of where you are on the areas of this world of ours, filled with continuous sin – precisely a conflict, which only changes the forms of appearance, while essentially remaining and surviving as a negation of humanity per se.

Not for a moment I did not doubt whether to be one of the promoters of this sad saga of the suffering of children who never grew up in Azerbaijan, not only because either the children of this region, too many of them, really, did not grow up precisely because of suffering and cruelty to which they were exposed in the wars of the 1990s within the territories of the former Yugoslavia, and especially in the area of our homeland, Bosnia and Herzegovina.

I am here with you today, because it is the obligation of every human being who does not base his existence on the exclusiveness against the other and the different one, but only and solely on the orientation and direction of the final understanding that we all have red blood under our skin and that it is this blood color that makes no difference between people.

The provinces of the spirit took over the world then and in that time by killing the spirit of understanding.  Not even today, 2020; we are not far from the above, because we cannot understand, because today, while I am saying this, on 21.2.2020 provinces of the spirit are mining the cemeteries of the Native Americans in the United States, by order of the actual President Donald Trump, to build the famous Trump wall toward Mexico, making a sacrilege and forgetting the words of the Indian (Native American) chief with the name Seattle written in the letter and speech delivered to U.S. President Franklin Pierce in 1854,

“You must teach your children that the ground beneath their feet is the ashes of their grandparents. In order that they may respect the earth, teach them that the earth is full of the life of our ancestors. You must teach your children what we have taught ours: that the earth is our mother. Everything that affects the earth affects the sons of the earth. When men spit on the ground they spit on themselves. We know this. All things are bound up in each other like the blood that binds the family. All things are connected. Whatever happens to earth will happen to the sons of the earth. We know this: the earth does not belong to man; the man belongs to the earth. Man has not woven the net of life: he is just a thread in it. Everything he does to this net he does to himself.”

I also take this opportunity to publicly condemn the desecration of the cemetery of the Indians (Native Americans) on the border with Mexico, right now and here in Sarajevo, which were done on behalf of the citizens of a friendly and close country to us, the United States.

That is why it is time to take off our gloves and call it with a real name, for the survival of a civilization that is constantly in process of killing and destroying, starting at the beginning of the 20th Century and continuing into this, the 21st Century. Without ceasing.

But the hordes of evil that killed the children of Azerbaijan in the 1990s remain as a civilization evil of the 20th Century and will be put to trial. This book, “They Will Never Grow Up,” authored by Mrs. Sariyya Muslumgizi is also a compilation of evidence of what has been done.

The suffering of the people of Azerbaijan, through only a partially told reflection on the suffering of children and their families, but also the people of Azerbaijan in this book, authored by Mrs. Sariyya Muslumgizi, is, unfortunately, the continuity of suffering that encompasses human civilization from its formulation to the present day, from the Holocaust throughout World War II and up to the present day and the genocide in Srebrenica – but what to call the suffering of hundreds and hundreds of innocents in the town of Khojaly at the end of the last century?

Where was the civilization when the world was killed not once but in more thousands of times in Srebrenica, but also to a lesser extent at other people’s killing places in Bosnia and Herzegovina, from Ahmići in Central Bosnia, via Kazani in Sarajevo, Heliport in Mostar and all the way to Briševo near Prijedor or Uzdol near Prozor?

It requires a catharsis, a unifying catharsis, starting with all those who have committed the most crimes, and the International Courts condemning based on merits, and down to those who killed only one man, woman, child, anywhere in the world, starting with us, here and now.

Is it enough for me, as a Muslim, to kneel on my own knees and say – yes, I am sorry for all the crimes committed on my behalf by Muslims in the war of the 1990s in Bosnia and Herzegovina? And they did. Because even if you killed an innocent man, but also a woman, a 4 year old child, in war, you are a war criminal.

But, that is not enough, because it is needed to be done by second and third side of the conflict, as well. What has happened with the children of Azerbaijan? The Azerbaijani army was not in Armenia and killing there. The Bosnian and Herzegovinian did not go to Serbia, but also to Montenegro, and even to Croatia, and was killing there during the wars of the 1990s.

No, they came here trying to, through their own, never realistically understandable myths; kill the men, women, children here. Whatever first and last name they carry.  Especially in Sarajevo, but also across Bosnia and Herzegovina. But where was the civilization when the world was killed not once but hundreds of times in Khojaly, Azerbaijan? Where?

Indeed, I was genuinely moved by reading the author’s lines of Mrs. Sariyya Muslumgizi – about great people, children who never grew up. I am not going to talk about the individual pains and sufferings listed in this book, because each pain is special to itself and that is why you really need to read it, not just read it, because this book is an unfinished, ongoing story of suffering.

Each new reading creates a new pain, a pain that persists in the eternity of civilization as a continuity. But time can do nothing when it comes to the pain of Azerbaijani children. Since time does not pass, because it does not exist. We humans are passing because we existed.

As one Sarajevo watchmaker once said, “While there are people, time will be measured.” Yes, when people are gone, time disappears, but suffering remains. Both in Bosnia and Herzegovina and Azerbaijan.

How to overcome suffering, at least try? By memory, which grows into eternity. How much pain and suffering in a single paragraph, and novels, not just one, are each of the stories in all three languages (Azerbaijani, Russian, English) in the book “They Will Never Grow Up.” These and such books are necessary for education, from the cradle to the grave.

These and such books are needed for the people. Regardless of race, religion and / or nation. Not to hate others and different ones, but to prevent the recurrence of history, which is so painful around the world. My recommendation is that this book be translated into all languages of the world.

For the benefit of humanity to prevent that such things will never happen to anyone again, but also not to be forgotten, precisely because of children around the world who will never grow up. Because, the memory is eternity.

Home » Prof. Hadžialić: Whatever Happens To Earth Will Happen To The Sons Of Earth – Speech