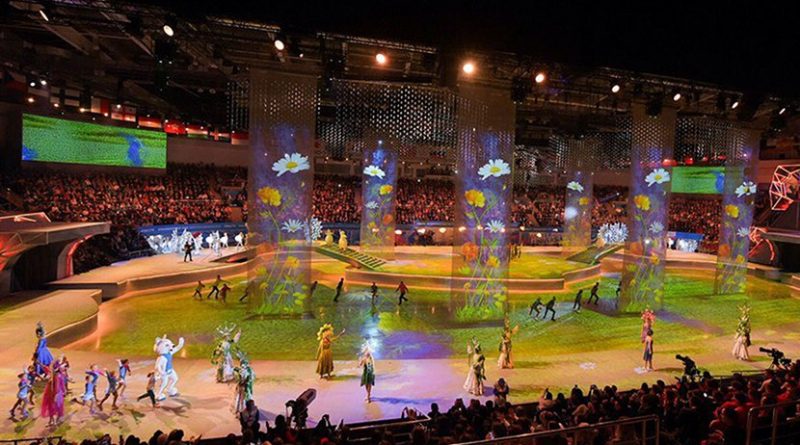 XXIX World Winter Universiade, held in Krasnoyarsk from 2 to 12 March, ended with the triumph of the Russian national team, which won almost half of all awards and received 112 medals out of 228: 41 gold, 39 silver and 32 bronze.

The Russian national team has set a new record for the number of medals won at a Winter Universiade on March 8. Moreover, earlier the best achievement also belonged to Russian athletes: two years ago in Almaty they won 71 awards.

According to the organizers, over 320 thousand spectators and fans attended sports and cultural events of the Universiade; about 800 journalists were accredited to the event, representing more than 200 Russian and about 40 international media. Competitions were broadcast in 60 countries.

Speaking at the closing ceremony of the Universiade, Prime Minister Dmitry Medvedev stressed that there were no losers at these competitions.

“We have been preparing for this event for almost six years. We did our best so that the guests and participants of the competition could experience Russia’s warmth and hospitality and make good friends and develop lasting friendships. These eleven unforgettable days in Krasnoyarsk, the capital of Siberia, were filled with strong and memorable emotions. […] I want to sincerely congratulate all the winners. You had worthy competitors, but you were the best of the best. However, the main victory, the main result is that, while there are champions, there are no losers,” he said.

“The most important victory is the one we share. It belongs to all the participants and organisers of the Universiade, trainers and doctors, judges and spectators, the thousands of volunteers and the millions of fans. Those who put all their energy and heart into it, who watched the competitions on their edge of their seats in the stands and on TV, and worked at the Universiade Village and all its sites. You have once again proved what is most important in sport – dignity and perseverance, team spirit, mutual support, dedication and absolute commitment to the principles of fair play,” Prime Minister added.

During the closing ceremony, the President of the International University Sports Federation Oleg Matytsin passed the FISU flag to the head of the Swiss Lucerne – the capital of the next Winter Student Games.

He also thanked everyone who took part in competitions’ organization, and noted that all the fans are eagerly awaiting the opportunity to see the performances of athletes at the World Winter Universiade in 2021.

Commenting on the results of the major international event, Head of Communications of the Swiss delegation Benjamin Blaser praised the organization of the competitions.

“For most of our Swiss athletes it was the first time they experienced such a large multi-sport event and all stated that they were extremely impressed by how good the sport infrastructure was and also by the excellent atmosphere in the stadiums and finish lines. They could see that the local spectators really were into the Winter Universiade and supported each and everyone,” he told PenzaNews.

According to him, the Universiade in Krasnoyarsk met the expectations of the Swiss national team in terms of high organization, despite some difficulties with transportation during the first days.

“Our men ice hockey team almost came late to their first game because the bus was 45 minutes late. And the luggage did not arrive because Aeroflot had some huge problems in Moscow with transferring the luggage of the Swiss delegation. But after a couple of days most of these issues were solved and our team was really able to concentrate on their competitions and enjoy their time in Krasnojarsk. Almost everyone stated that it seems to be like at an actual Olympic Games with the high quality of infrastructure, media interest and supporters,” he said.

In his opinion, Russia’s successful experience will be useful to the Swiss organizers in preparation for the 2021 Winter Universiade.

“A delegation from the organizing committee was in Krasnoyarsk to take part at the Observer Program and could learn a lot from the Russian organisers. Of course, the next Winter Universiade will be a bit different as we are not building any new sport facilities. In fact all competitions will take place in existing sport venues. Our country has a lot of experience in organizing winter sport events and therefore we will make everything possibly to make visitors and athletes feel like at home in Switzerland. We of course hope that many enthusiasts from Russia will now also travel to Switzerland in two years to support their athletes and enjoy the Swiss hospitality,” Benjamin Blaser added.

In turn, French freestyle skier Benjamin Cavet, who won the competition in mogul, also said the organization was excellent, drawing attention to friendly but competitive atmosphere.

“It was great for me. We finished our World Cup tour a week before Krasnoyarsk, I still wanted to compete more so I was very glad to have one more event. I ended taking the gold in single moguls which is a great achievement for me,” he said.

The athlete also compared student games with Olympic ones.

“The winter Universiade in Russia was an amazing event! It was like being at the Olympics. Everything was so well organised. It was perfect having lots of sports represented, the French team was big and friendly. I look forward to coming back to Krasnoyarsk next winter for a World Cup mogul skiing event,” the winner of the Universiade said.

Zahra Lari, who is the first UAE figure skater to compete internationally wearing a hijab, after the IUS changed the rule for her, also called organizers’ approach to the preparation professional.

“I really liked Russia, especially considering the fact that I came to this country for the first time. The level of organization is very high: there are excellent sports facilities, the Ice Palace, where figure skaters performed and, of course, the Universiade Village,” the UAE figure skater said.

“I would really like to have such ice rinks in my country. This will allow more people to learn how to skate and maybe even perform at major international tournaments, including the Universiade,” she added.

According to the athlete, the competition in Krasnoyarsk was “an unforgettable experience” for her.

“It was a great honor for me to represent the UAE at the Winter Universiade for the first time. I am very proud of this fact and proud of my country. It was also very exciting for me to act as an ambassador of our culture in the Russian Federation. I was very happy to learn more about Russia and its traditions and will be happy to return to this country as a figure skater or simply as a tourist,” Zahra Lari explained.

“Our athletes and coaches praised the excellent sport venues, especially the Yenisey Arena for bandy and Raduga cluster for cross-country skiing and ski orienteering, while Athletes’ Village with all its services was our comfortable home during the games. We were all impressed by the amount, friendliness and helpfulness of the young volunteers. Their ability in English language was also a positive surprise to me,” he said.

In his opinion, the organizers of the Universiade managed to create a special festive atmosphere at the competitions.

“Based on my earlier experience from the Kazan Summer Universiade, I knew that the ceremonies will be something extraordinary. Still, especially the Opening Ceremony managed to even surpass my high expectations. I was also very happy about the way all the female delegation members were given flowers and small gifts on the International Women’s Day,” Jukka Tirri said.

According to him, in an event of this scale there are always some problems: they were this time too, but this did not spoil the overall impression of the Games, and the participants were satisfied with the organization of the competitions.

“Finnish Universiade team achieved its best result ever by winning 12 medals in Krasnoyarsk. We had many reasons to celebrate during the games and I’m sure that every person in our team has some very nice memories from the Krasnoyarsk Winter Universiade,” he said.

Meanwhile, Anton Friesen, Member of the foreign affairs committee and the committee on humanitarian assistance and human rights of the German Parliament, AfD MP, expressed the opinion that such major international events as the Universiade allow athletes not only to compete, but also make new friends.

“It’s not only about winning, of course. Athletes from around the world become acquainted with each other. They are also representatives of their countries and can help to enhance the understanding among nations. Personally I liked the Universiade this year in Krasnoyarsk, because I love winter sports in general,” the German politician said.

In his opinion, the most effective way to improve the relationship between countries is the direct exchange between citizens.

“Therefore I support all kinds of municipal partnerships, youth exchanges or international sport events like the Universiade. These means can help to enhance the understanding among nations from the bottom. Politicians should recognize this fact and support ‘people’s diplomacy’ more often,” Anton Friesen concluded.

The Summer and Winter Universiades are held every two years under the auspices of the International University Sports Federation (FISU).

Students from the age of 17 to 25 years and graduates who have received an academic degree or a diploma in the year preceding the competition are allowed to participate in competitions. Winter Universiade will be held in Swiss Lucerne on January 21–31, 2021.