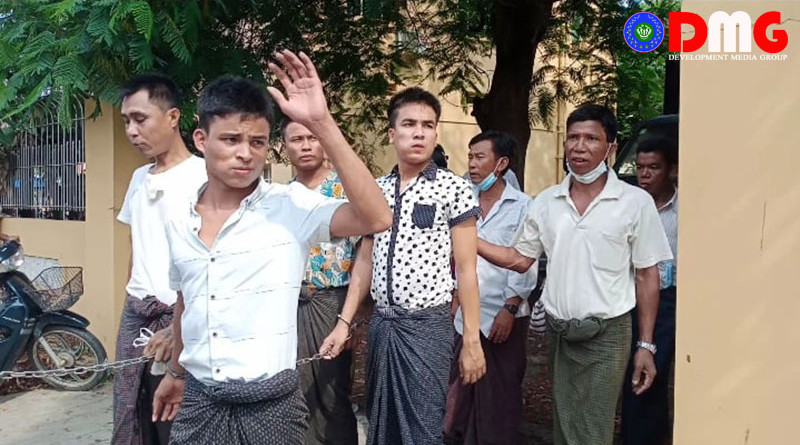 The five men who were beaten by Tatmadaw soldiers after appearing before the Sittwe District Court. Photo Credit: DMG

Less than two weeks after video of five men being beaten by Tatmadaw soldiers went viral online, the victims of the “unlawful interrogations” appeared before the Sittwe District Court on May 22 and were arraigned on terrorism charges, lawyer U Kyaw Nyunt Maung told DMG.

The five men from Arakan State’s Ponnagyun Township were among 38 people interrogated by the military on April 19. But while the other 33 were reportedly released the next day, Ko Nyi Nyi Aung, Ko Aung Myo Lin and Ko Maung Chay from Kyaukseik village; Ko Min Soe from Ponnagyun town; and Ko Kyaw Win Hein from Zeebingyi village were charged under the Counter-Terrorism Law days later, accused of having ties to the Arakan Army.

Videos showing the men being repeatedly punched and kicked by soldiers aboard a Tatmadaw watercraft surfaced online on May 10, and two days later the military admitted that “some members of the security forces performed unlawful interrogations against them.”

Ko Kyaw Win Hein emerged from the “interrogation” experiencing chest pain and was being provided medical treatment for the injuries he sustained at the hands of the security forces, his mother said.

“He was beaten on the head with a pestle,” said his mother, Daw Khin Nyunt Yin, adding that her son was innocent.

Arakan State lawmaker U Aung Than Tin from Ponnagyun Township raised questions about the incident during a session of the state legislature on May 22, asking who had allowed members of Light Infantry Battalion No. 550 to take the men into custody and whether police could transfer the accused to other security entities without permission from the relevant court.

Colonel Min Than, the Arakan State minister for Security and Border Affairs, said the interrogation was conducted according to sections 156 (1) and (2) of the Code of Criminal Procedure.

The Tatmadaw said it would take action against any security personnel who engaged in unlawful interrogation techniques on the naval ship.

The next court hearing for the five men, who face charges under sections 50(j) and 52(a) of the Counter-Terrorism Law, is scheduled for June 5, according to their family members.