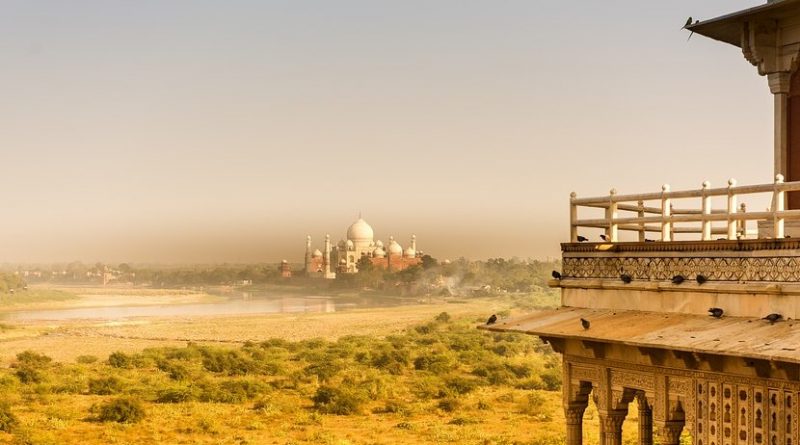 I am an Indian. And as an Indian, I always believed that there were a few things I must do. Like respect our nation and our national anthem, go to Agra and see the Taj Mahal. As I was doing well with my first two conditions, I decided to go ahead and fulfill my last condition-visit Agra.

So on a chilly morning, I set out to Agra with my parents. We were doing the “clichéd” tourist thing. We were taking the bus service provided by the Delhi Tourism Department of Agra which promised a full day of sight-seeing in the wonderful city of Agra, complete with a guide and food service at certain rest-stops. Imagine my excitement! I was going to see the Taj at last!

As it happens so very often in India, we were taken for quite a ride by the Taxiwallah who was to take us to the starting point of the bus at Baba Kharak Singh Marg. The reason either being that he thought of us as hapless tourists visiting from the far south of India or he just did not know the way to Baba Kharak Singh Marg and was too proud to ask anyone on the way. I still haven’t figured out which of the two it was but I was inclined to believe that the first one rang truer. Suffice to say that we got to the place 10 minutes late and almost didn’t make the bus. But thank god for delays, the bus was late to leave anyway. A definite occurrence in India.

I did get a chance to show off my urban Mumbaiya survival skills by yelling at the Taxiwallah for putting us into this embarrassing predicament in the first place. I can remember the look on my parents’ face when they saw their sweet little girl giving the Taxiwallah a piece of her mind in a polite but raised voice! I bet they never thought I had it in me.

And so we began our epic journey to Agra in a bus filled with Norwegians, Australians, Indian born Canadians and Americans and some NRIs. By NRIs, I like to think of people who have been born here but been out of India for awhile now. I do not classify myself in that category even though I am studying in the US. So we were the only Indians, not counting the driver and his helper. Both of whom could not speak English.

Surprisingly, about an hour into the journey, the driver suddenly pulls over in the middle of nowhere and vanishes mysteriously along with his helper. [We still haven’t seen our guide yet!] No one has any idea where we are or why we are there. But the others were excited to see the “real” India. You see this seems to be a standard spot for tourist buses to stop and the drivers to vanish. And it seems like the street entertainers seem to know this. So the foreigners are regaled by the growling and dancing of bears on leashes and funnily dressed monkeys doing tricks, again, on leashes. They even saw a real live snake charmer.

Now frankly, I have lost my childhood fascination of watching monkeys perform but this seems like such a novelty to my foreign friends that they immediately do the next most clichéd tourist thing. They start clicking pictures and giving Rs 100 bills to the entertainers. Some of them even exclaim how horrifying it is to see animals on leashes but still click pictures. The NRI with us, whom I shall call Mr. X, was apparently very agitated. Exclaiming in a loud voice that this was outrageous and look how unclean everything in India is! He asked me if my parents and I were from the States too. I guess I have the ‘NRI’ look about me, but when I told him that I had been born and brought up in Mumbai and had just gone abroad for an year now, he turned to tell me that I must be ‘dying to get back’. That statement could not have been farther from the truth. I was dying to just stay back in India and work here permanently!

Anyway, after a few more pit stops, each of which had our dynamic duo of non-English speaking driver-helper vanishing, we reached Agra and picked up our guide. An enthusiastic young man, eager to please all. Or as he kept saying, “I need keep all people happy” [I need to keep everyone happy]. He took us to Sikander’s fort and Agra fort. We again did the tourist thing of taking pictures of the buildings, surrounding gardens, anything that moved. At Sikander’s fort, there were many monkeys who seemed quite used to having humans around them. Some of them even posed for photographs with our fascinated foreigners who were feeding them. I guess this was another novelty for them.

At each of the forts our ever enthusiastic guide ‘explained’ the history of the place. I do not remember all the words he used but some of them were so hilarious that I felt like laughing out loud at them. At one point, I remember him mentioning in a very serious tone, ‘Emperor no kill brother. Why? Because Hindu no kill brother’. I wonder how the Hindus figure into the Mughal dynasty who were responsible for both forts being built. I guess I must have thought wrong.

After stopping at a posh restaurant for lunch, which our guide claimed could serve ‘anything’, we moved on to the highlight of the day. We were going to the Taj at last. I do not believe I realized the enormity of it all until I entered the compounds that housed the Taj. I was struck by its beauty, its mixture of elegance and simplicity. I was struck by the fact that I had finally made it. I had reached the end of a pilgrimage which had started for me from the moment I had heard about the Taj Mahal.

We went into the Taj and walked to the place where the tombs of the fifth Mughal emperor Shah Jahan and his lovely queen Mumtaz Mahal were housed. It all felt too surreal to me. I imagined that if I listened closely enough, I could hear the voice of the labourers who worked to make this dream of Shah Jahan a reality. I could hear the quiet sobs of the emperor as he mourned the loss of his beloved wife. I could feel the history reasserting itself through the structure.

But some of the other things I noticed was the reaction, people had. Everyone there, from foreigners coming from afar to Indians who were visiting for a day were all awestruck by the majestic Taj. Everyone was busy clicking pictures as I was. But this time, everyone who was clicking pictures seemed to hesitate a moment to gaze upon the structure.

Overall, the trip was a roaring success. I got to do this trip with my parents, saw the Taj but most importantly, I got to meet a few interesting people.

The Australian family of 5 who very happily proclaimed that they had had “garam chai and samosas” from the road side, the NRI Mr. X who seemed to compare everything to the US of A and was horrified that the Australians had actually eaten from the road side, he claimed that he would not do that even though he was an Indian. However, when he saw the lines for Indians and non Indians for admission and noticed that the fees for Indians was lesser, he chose to become Indian. The Canadian born Indian boy who seemed to be lost whenever anyone spoke to him in Hindi, our enthusiastic guide who instructed us to refuse goods from street vendors even if they made him ask us to buy them.

I realized that this trip had not just given me a chance to see the Taj but also to see the people. The Indians who shoved each other in their eagerness to sell you some trinket, the chaiwallah who was smiling proudly because some foreigners had eaten at his stall, the small child who was smiling because someone asked her to pose for a photo. I saw the Indians who belittle their own country by pointing out the small things which were wrong with it, never seeing the diversity and variety which was present in it. The culture and beauty and friendliness of the people. The foreigners who seemed to take pleasure in seeing anything that was native and seeming eager to want to know more about everything.

And I realized at that very moment that I was truly proud of being Indian. It was not just the Taj that led me to my conclusion, but the people too. So in spite of all the delays that occur, the fights with Taxiwallah, the pick pockets, the street vendors trying to sell, you things, I am proud to be an Indian.

I guess on a scale of 1 to 10, I would rate the entire experience as a 20. So my advice to all the Indians out there is that if you still haven’t seen the Taj, go see it. But don’t just see the building. See the people.

One thought on “Just A Day In My Paradise: Visiting The Taj Mahal – OpEd”