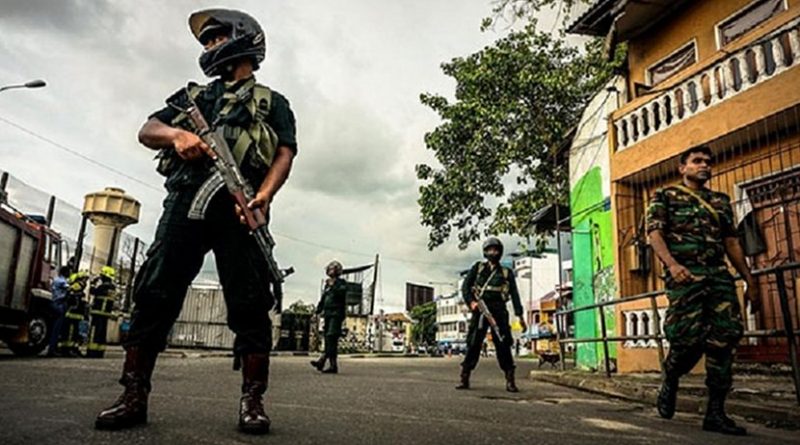 By Lt Gen AS Lamba*

On 21 April 2019, Sri Lanka witnessed its largest terrorist attack since the end of its brutal 26-year civil war. These Islamic State (IS) attacks targeted Easter celebrations and luxury hotels in Colombo, killing Sri Lankan and foreign nationals. This article will consider domestic political, regional and institutional faultlines in light of the bombings, recent state responses to counter the terrorist threat, and the far-reaching impact of cross-border terrorism, in its evaluation and recommendation for a regional counter-terrorism strategy with India as a potential lead.

The first issue for consideration is discrimination against Christians in Sri Lanka. In an article published on 21 April 2019, Ranga Sirilal and Shihar Aneez quoted reviews conducted in 2018 by the National Christian Evangelical Alliance of Sri Lanka (NCEASL), which represents nearly 200 churches and other Christian organisations, that there had been 86 verified incidents of discrimination, threats, and violence against Christians in that year. In 2019, the NCEASL recorded 26 such incidents, with the last one reported on 25 March. Despite the public nature of these statistics, the Sri Lankan government failed to take pre-emptive action.

The second major factor is the divide within Sri Lankan politics. The political conflict between President Maithripala Sirisena and Prime Minister Ranil Wickremesinghe has witnessed the former alleging failure by the prime minister, and the latter accusing the president’s office of keeping him out of intelligence briefings and updates.

This failure to share intelligence warnings between the highest political offices and institutions responsible for maintaining internal security can be read in two ways. One, it points to the absence of a functional structure of intelligence networking at the national level. Two, the purported or deliberate blocking of this information from circulation and dissemination by design, if true, may prevent investigating agencies from being able to identify the real causative factors of intelligence and/or government dysfunction.

The State Intelligence Service (SIS) is Sri Lanka’s lead agency tasked with both internal and external intelligence-gathering. It also collates intelligence from the army, navy, and air force, and  operates under the purview of the ministry of defence.

From the days of its functioning under the government police, then the special branch, and later, the Intelligence Services Division, Sri Lankan intelligence has been repeatedly reorganised. In this time, it has been accused of several shortcomings in its ability to do its job. Its failure to prevent the 1983 riots led to another round of reorganisation under President JR Jayawardene in 1984, when it came to be known as the National Intelligence Bureau, and its present avatar, the State Intelligence Service, came about in 2006.

With regard to the Easter bombings, both international intelligence agencies and domestic institutions, such as the ministry of defence and police, were forthcoming in alerting the SIS of the impending threat, with some warnings arriving as early as April 4. Written communication from the defence ministry on 9 April to the police chief with intelligence inputs, including the group’s name, and a further warning on 11 April by the police to the heads of security of the judiciary and diplomatic security division, received no response or action.

In fact, a secret memo, reportedly initiated by Sri Lankan security officials days before the attacks, describing the threat of bombings, with names, addresses, and phone numbers of those believed to be involved, never reached the offices of the president and prime minister. Ironically, several of the bombers had been arrested and then released in the months preceding the attacks.

Pakistan’s ISI and its Trans-national Reach

Sri Lankan and Indian security agencies are now working together to probe links between domestic terror groups and Pakistan-based terror groups in the aftermath of the bombings. However, there is a history of the Sri Lankan establishment ignoring information pointing to terror activities in development for a long period of time, which finally culminated in the events of April 2019.

Sri Lanka’s tryst with terror could have ended with the death of Liberation Tigers of Tamil Eelam (LTTE) supremo Prabhakaran in 2009 if the remaining terror groups had been dealt with immediately thereafter. Pakistan was able to take advantage of Sri Lanka’s failure to appreciate this necessity. When the surge of fleeing LTTE militants were seeking amnesty, resettlement, and jobs abroad, Pakistan’s Inter-Services Intelligence (ISI), operating in Sri Lanka since 1990, used this opportunity to consolidate the scattered LTTE remnants by organising new bases.

Crucial evidence from the interrogation of Arun Selvarajan, a Sri Lankan Tamil and former LTTE operative, and later, Mohammed Sakir Hussain, and Mohammed Suleman, who were arrested for spying in India for the ISI, revealed Sri Lanka’s consolidation into a new recruitment hub for the ISI. However, this was left unaddressed by the government.

The Sri Lankan leadership has pointed out failures across all levels of governance, and appears serious about bringing peace back to the island. President Sirisena has publicly pledged to take action against anyone who failed to prevent the attack, putting particular blame on two officials: the defence secretary, who resigned on 25 April, and the inspector general of police, who stepped down a day later. The prime minister, too, has acknowledged collective government responsibility for the failure to protect Sri Lankans from these attacks.

Several concrete measures have since been taken to match word with deed. An emergency law was enforced for a period of thirty days; it gave the police and military sweeping powers to search, seize, arrest, detain, and interrogate suspects without court approval. This was extended for another 30 days by the president on 22 May. More than two hundred clerics across the country were expelled, and face veils were ordered to be removed. A curfew and a social media blackout were put in place. Two local groups, National Thawheedh Jamaath (NTJ) and Jammiyathul Millathu Ibrahim were designated as terrorist groups and banned, with serious implications for their cadres, assets, and properties. According to news reports, as many as 140 supporters of the IS are currently in Sri Lanka.

The raids appear to have led to some decisive outcomes. Targets were pinpointed, suicide bombers killed, and family members and co-conspirators questioned, all of which may have led to a significant disruption of the network.

Despite the alleged decimation of the IS, the group appears to be is re-consolidating outside its physical ‘caliphate’ through ideological and operational franchisees and sleeper cells. The IS claims that a functional virtual caliphate, “Wilayat-e-Hind,” is already established in the region between Kashmir, Pakistan, and Khorasan on the Afghanistan-Pakistan border. The real threat is one of this virtual caliphate turning into a consolidated operational set-up that could replicate the strategy it deployed in Syria and Iraq.

This threat could emerge from residual IS bases in South and Southeast Asia seeking to expand their presence, with groups such as Jamaat-ul-Mujahideen Bangladesh (JMB) andthe  Arakan Rohingya Salvation Army (ARSA) in Myanmar. The withdrawal of US troops from Afghanistan will embolden IS Khorasan (ISK) to threaten the fragile environment in Pakistan, Afghanistan, India, and even China. Eventually, this could turn Afghanistan into a hub for the IS to orchestrate major attacks across the region, including India through Pakistan.

It is thus time to articulate a regional counter-terrorism strategy that not just deters IS but completely disrupts networks both at the national and regional levels. This will pre-empt strategic and organisational slippages and limitations that accompany a single country and/or system handling information and intelligence inputs, as evidenced in Sri Lanka’s Easter bombings.

The setting up of a regional counter-terrorism centre that could integrate information-sharing and intelligence inputs, tracking intercepts of militant groups, and monitoring their respective environments for comprehensive analysis and coordination, deserves serious consideration by countries of the region. This centre could be headquartered in potential epicentres of terrorist activity in India, such as in West Bengal and Tamil Nadu, with reciprocal centers in Sri Lanka, Bangladesh, and Myanmar. These centres must also be plugged into global intelligence networks.

In addition, lessons can be learnt from the Southeast Asian experience of dealing with terror groups and franchisees, in particular, the Philippines’ battle against the siege of Marawi by IS. One of the critical factors of success was a regionally integrated counter-terrorism strategy. Strong commitments from Malaysia, Philippines, and Indonesia to address terrorism across porous borders together was instrumental in this regard. A trilateral cooperative arrangement was also set up to secure common areas of maritime concern. Joint maritime coordinating centres were established in Tarakan, Indonesia; in Tawau, Malaysia; and Bongao in the Philippines. The Indonesian, Malaysian, and Filipino air forces also implemented joint action plans for the deployment of air assets and operations. Australia, Japan, and the US contributed comprehensively in terms of information, intelligence-sharing, and combat support. These coordinated actions contributed decisively to the successful outcome of the battle, and hold important lessons for the South Asian regional experience.

At the local level, the Easter bombings seemingly confirm Sri Lanka’s intelligence unpreparedness. Regionally, they raise questions for South Asian security, highlighting the transnational nature of the issue, and prompting the need for a response that goes beyond national borders.