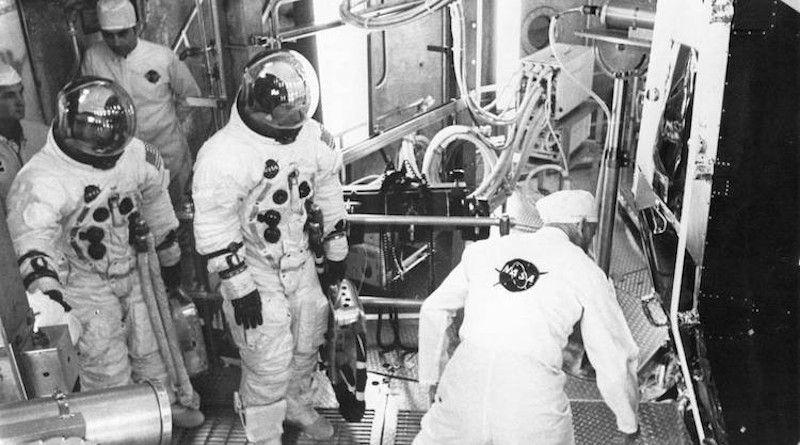 On July 24, 1969, Apollo 11, lunar mission completed landing on the moon and the safe return of the three astronauts Neil Armstrong, Buzz Aldrin, and Michael Collins. The famous Neil Armstrong’s words after landing on the moon, “That’s one small step for man, one giant leap for mankind” echoed around the world. The whole world was thrilled over the great achievement that happened nearly fifty years ago.

The blueprint for the Apollo space exploration germinated in 1961, the golden era of American superiority. In early sixties American excellence was on display, realizing the full benefit of scientific innovations, increasing productivity and growth of the industrial revolutions to the fullest potentials. Americans were in cloud nine, and rest of the world admired their achievements.

Commissioning a rule-based UN system with dozens of multilateral agencies to maintain the world peace were praiseworthy contributions of Americans to the greater good of the world. Americans took up the leadership in reconstructing the war-torn countries having defeated the racially motivated enemies.

The underline motivations were set, as vision founded on an ideal set of values. President John F Kennedy in his famous speech delivered on September 12, 1962, at Rice University Stadium, Houston Texas, quote; “Our leadership in science and industry, our hopes for peace and security, our obligations to ourselves as well as others, all require us to make this effort, to solve these mysteries, to solve them for the good of all men, and to become the world’s leading space-faring nation.” A mission all Americans and rest of the world cherished and rallied around

The decades started in the seventies, eighties and nineties completely reversed the American missions first to concur the inflation-fighting a war in Vietnam, and since 1980 to capture the markets on misguided priorities set in search of ownership societies on neo-liberal dogma and exporting democracies and human rights.

The so-called markets those spurring fake prosperity through globalization started to give away at the beginning of the new millennium in 2001 with the Dot-com bubble and followed with the European and North American financial crisis in 2008.

American dream thinking first and leading for human emancipation has been acknowledged by the world with appreciation. Apollo Lunar mission to concur space is one such mission admired by many even to this date. Coming up with Marshal plan to save the West Berlin citizen at the height of the Cold War is another American mission which receives credit.

In the twenty-first century, the mission to defeat the E-bola epidemic in West Africa under President Barack Obama also remains outstanding, particularly evaluating the things happening with the COVID-19 pandemic, and the responses from the President Donald Trump’s administration.

In 1971, President Richard Nixon’s decision to move away from gold parity unilaterally to make US$ as a reserve currency rest of the world disliked. Similarly in 1981, forcing the Liberalization, Privatization and Globalization Washington consensus-based; market concurring economic policy formulas were not welcomed by many. These two policy options are even rejected and criticized by many as of today resulting in the widening of income and wealth inequality.

The fall of Communism with the demolition of the Berlin Wall in 1989, superiority complex misguided many American Presidents to act irrationally since 1991. Since then, American missions have always been destructive wars to export democracy to other regions by force and extract natural resources and convert them to financial assets for speculative commerce at the expense of the well-being of all living beings.

The American mission to invade Iraq and the unintended bitter consequences experienced in 2001 9/11 terror attack on the World Trade Centre was an unforgettable response which diluted the military superiority, and the unipolar status under the US leadership declined steadily.

This essay highlights the chronology of American mission from 1961 to 2001 and the impact on the rest of the world. Readers can conclude; when the purposes are set for the greater good of the humanity as narrated by President John F Kennedy in his speech setting up the task for the Apollo Lunar mission in 1962 the outcomes of such purposes are appreciated and acknowledged as praiseworthy achievements.

Even till this John F Kennedy’s mission set in 1961 remains superior for many of the spillover benefit of the Apollo Lunar mission. The advancement of the computing power was the direct by-product of the lunar mission. The computers used to monitor and guide the lunar mission accurately enabling the astronauts to complete the task successfully and return to earth. Since then, computing power grew exponentially, driving the third Industrial Revolution in the world.

Moreover, the space explorations, and satellite technology developed further so that the communication technology realizing the benefit of the Internet and mobile telecommunication experiences, which enabled Steve Jobs to invent the Apple I phone, revolutionizing human connectivity with mobile phones. These achievements are now known as the Fourth industrial revolution, digitalizing everything and human beings are marching towards the hitherto unknown digital age and giving up all their analogue cultures.

When political leaders work with a broader mission for the greater good of the people, the outcomes are richly rewarding, and the benefits are perpetual. Narrower purposes such as putting America first to make America great again as spelt out by President Donald Trump will only make the great American dreams small, only helping the American adversaries to become Greatest, including China and Russia.

* Writer is the Regional Director for Finance Sector Activities attached to UNI Asia & Pacific Regional Organization in Singapore. He can be contacted at: [email protected]. This article was originally published in the Island in Sri Lanka on July 24, 2020.