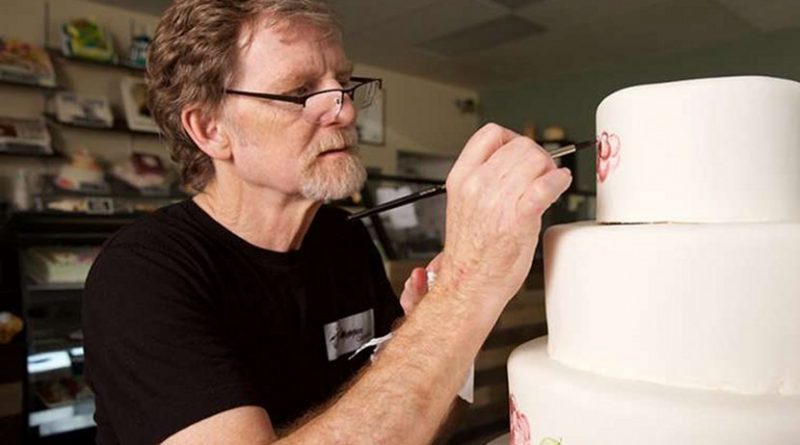 Some opponents of broad religious freedom protections have spent over $500,000 on advocacy and public relations campaigns related to the Masterpiece Cakeshop Supreme Court decision, a CNA analysis of recent foundation grantmaking has found.

The spending is among at least $2.4 million in new anti-religious freedom grants since October 2017, according to CNA’s analysis. Since 2014 at least $9.9 million in grants from multiple sources have been earmarked to oppose religious freedom protections. The grants generally come from backers of LGBT political causes, legal abortion and mandatory contraception coverage.

After a six-year legal battle, the U.S. Supreme Court backed Phillips, the bakery owner, who in July 2012 had declined a request to create a cake celebrating a same-sex wedding due to his religious beliefs. The court ruled 7-2 in his favor in the June 4, 2018, decision Masterpiece Cakeshop, Ltd. v. Colorado Civil Rights Commission.

While the state civil rights board had ordered him to serve same-sex weddings and undergo anti-discrimination training, the Supreme Court overruled the order, saying some commissioners “showed elements of a clear and impermissible hostility toward the sincere religious beliefs motivating his objection.” The decision did not address broad constitutional questions.

That court case was the focus of the Evelyn and Walter Haas Jr. Fund, a San Francisco-based private family foundation with half a billion dollars in assets. Its website lists multiple grants from 2017 and 2018 dedicated to messaging related to the Masterpiece Cakeshop Case.

The Haas, Jr. Fund gave $200,000 to the National Center for Lesbian Rights for a campaign to “educate the LGBT community” about the importance of the case, and $100,000 to the Equality Federation Institute for the same purpose. It gave $100,000 to the Movement Advancement Project, a key LGBT strategy and communications think tank funded by Colorado entrepreneur Tim Gill, “to develop and test ads and other tools to educate and engage the LGBT community” about the case.

It is possible that additional grants related to the case will be made public in later documents.

The funding has drawn criticism from the bakery’s supporters.

“Organizations that initially supported gay marriage made the argument that they simply want the same right to marry as everyone else,” said Jeffrey Hunt, director of the Centennial Institute and vice-president of public policy at Colorado Christian University, a self-described interdenominational Christian institution.

“What we are seeing today is an effort to punish, by government force, anyone who doesn’t share their opinion on gay marriage,” said Hunt. “Even Justice Kennedy in his decision to legalize gay marriage condemned such activities by LGBT activists.”

The university is only miles from the Lakewood, Colorado bakery at the center of the case. It has held rallies in support of bakery owner Jack Phillips, has invited him to be a speaker, and has purchased from the bakery.

“It’s no surprise to us that many foundations are pouring money into the effort to restrict religious freedom,” Hunt told CNA. “The truth is the work of the church and the teachings of the Bible are always counter-cultural. They have been since the beginning of Christianity. The founders of our country understood that religious beliefs should be protected, even if they are counter-cultural.”

Denis Chicola, communications director for the Haas Jr. Fund, told CNA that the fund both believes in religious freedom and believes that the actions of the cakeshop were discriminatory.

“Religious freedom — the right to practice one’s religion and to know that society will make reasonable accommodations for people to do so — is a bedrock American value. It’s something each and every one of us should defend,” Chicola said. “We became involved in the Masterpiece Cakeshop case because we and our partners believe that allowing a private business to discriminate against a gay couple is discriminatory. Nobody should be turned away from a business simply because of who they are.”

When the Supreme Court announced it would hear the Masterpiece Cakeshop Case, Chicola said, the fund’s grantees reported “many LGBT people did not understand the case, let alone the potential harmful ramifications it could have for marriage equality and for the ongoing work of securing broader nondiscrimination protections.”

“For this reason, we supported long-time grantees to conduct a public education campaign targeting the LGBT community,” he said. “This campaign was focused on the facts about the case, and we were heartened by how our grantees were able to broaden people’s knowledge and understanding on this vitally important issue.”

According to Hunt, Phillips’ opponents missed the point.

“Not a single Christian wants to treat a member of the LGBT community as a second-class citizen. We are called to love and serve all people,” he said. “In Jack’s case, he would have served any person who sought to purchase a product from his shop. He simply did not want to use his artistic talent to celebrate a ceremony that violated his deeply held religious beliefs.”

“Jack’s case has nothing to do with failing to serve a member of the LGBT community,” Hunt added. “In fact, if I as a Bible-believing conservative asked Jack to bake a cake that violated his religious beliefs, he would have said no. It is not about the people, it is about the message.”

“We are losing our sense of civic friendship in our communities. Too often, activists seek to use the law to punish those they disagree with in an effort to create uniformity,” he continued. “I believe we can live in society where members of the LGBT community are respected and religious freedom is protected.”

Phillips, the baker, has since faced another complaint from a prospective customer, an attorney who asked for a cake to mark a gender transition anniversary. The request was for a cake that was pink on the inside and blue on the outside, representing a transition from male to female. Phillips declined to make the cake based on his religious beliefs, and the prospective customer filed a complaint with the Colorado Civil Rights Commission. The commission ruled that there was sufficient evidence of a discrimination claim based on transgender status and ordered both sides to “compulsory mediation.”

“The state of Colorado is ignoring the message of the U.S. Supreme Court by continuing to single out Jack for punishment and to exhibit hostility toward his religious beliefs,” Kristen Waggoner, senior vice president of the U.S. legal division of Alliance Defending Freedom, said in August.

Waggoner’s legal group is representing Phillips, but it declined comment for this story. Phillips has said he has also declined to make a number of other types of cakes, including cakes for Halloween, bachelor parties, divorce, cakes with alcohol in the ingredients, and cakes with atheist messages.

Grant listings and tax forms provide some insight into the strategy, tactics and resources of the large network of advocacy groups, academic projects and other organizations that aim to limit religious freedom protections in the U.S.

Many donors have combined to fund the Rights, Faith & Democracy Collaborative, run out of the Massachusetts-based Proteus Fund. The collaborative’s website says its grantmaking “centers around building a sustainable, cross movement infrastructure capable of developing a unified voice for LGBTQ, RJ(reproductive justice), and faith allies; investing in learning that advances the field; and supporting long-term culture change efforts to move hearts and minds on these issues.”

Since September 2017 the Haas, Jr. Fund has given $200,000 to this project. The Overbrook Foundation has given $125,000, citing the collaborative’s work to curtail “the inappropriate use of religious exemptions to curtail reproductive health, rights and justice, discriminate against members of the LGBTQ community, and otherwise undermine fundamental rights and liberties.” The Moriah Fund gave $35,000, citing its focus on “defeating harmful religious refusal policies.”

Perhaps the largest donor to the anti-religious freedom campaign, the New York-based Arcus Foundation, included $300,000 to the collaborative in its recent grantmaking.

Arcus has given $900,000 in anti-religious freedom grants since September 2017. These include $150,000 for the ACLU’s Religious Exemptions Communications Hub Project, which “spurs communications efforts in driving and shaping the public narrative around religious exemptions that harm or would harm LGBTQ people, women, and religious minorities”; and $200,000 to the Center for American Progress’ Faith and Progressive Policy Initiative “to challenge discriminatory religious exemptions policies, by advancing moral and ethical arguments for faith-centered resistance against conservative policies within the United States,” according to a June 20 news release from the foundation.

Another $125,000 went to support the Columbia Law School’s Public Rights / Private Conscience Project, which the Arcus grant listing characterized as “a thought leader in the development of legal and policy analysis, as well as in the development of messaging that strikes a balance between religious rights and other fundamental rights.”

The Arcus Foundation was launched by billionaire heir Jon Stryker, whose sister Pat Stryker is a major political donor in Colorado. Its board includes Darren Walker, president of the Ford Foundation, which gives out hundreds of millions of dollars in grants each year. In the past, it too has backed the Public Rights / Private Conscience Project.

Religious change is also an object of the funding network.

Chicola, the Haas, Jr. Fund spokesperson, said that in 2007 his employer launched a major initiative backing the Institute for Welcoming Resources and its partners “to help inform hearts and minds on gay equality among people of faith.”

“As a result of this work, thousands more religious leaders and people of faith became advocates, and four of the five major mainline Protestant denominations eventually repealed ant-gay policies,” he said.

The Arcus Foundation has similarly been involved in cultivating allies among religious groups. One of its 2018 anti-religious freedom grants, $125,000 to Dignity USA for the Equally Blessed Coalition, was earmarked for “advocating for LGBTQ acceptance and for an end to harmful religious exemption policies within Catholic communities,” according to the June 20 grant announcement.

The self-described Catholic group rejects Catholic teaching on the immorality of homosexual acts and has called for same-sex unions to be recognized as sacramental.

The Proteus Fund collaborative’s own website says it has given $900,000 in program grants to eight organizations in state-based coalitions. Its grant listings indicate it has funded anti-religious freedom coalition partners in New Mexico and Georgia, and is preparing additional coalitions in Texas and Florida.

Rounding out the full list of recent anti-religious freedom grants, other Haas Jr. Fund spending includes $150,000 to the Pride Foundation; $50,000 to the Center for American Progress “to influence public debates around protecting civil rights protections and safeguarding religious liberties”; and $30,000 to back the Columbia Law School Public Rights/Private Conscience Project.

The Overbrook Foundation’s recent giving included $60,000 to the Lambda Legal Foundation for purposes including opposition to “overly broad” religious exemptions in non-discrimination legislation. Another $25,000 went to litigation program support for the group Freedom for All Americans, citing its work backing anti-discrimination protections for sexual orientation and gender identity and expression “without allowing overly broad and harmful religious exemptions.”

CNA’s focus on grants specifically dealing with religious liberty does not convey the entire financial infrastructure for such organizations, many of which receive large grants for general operating support.