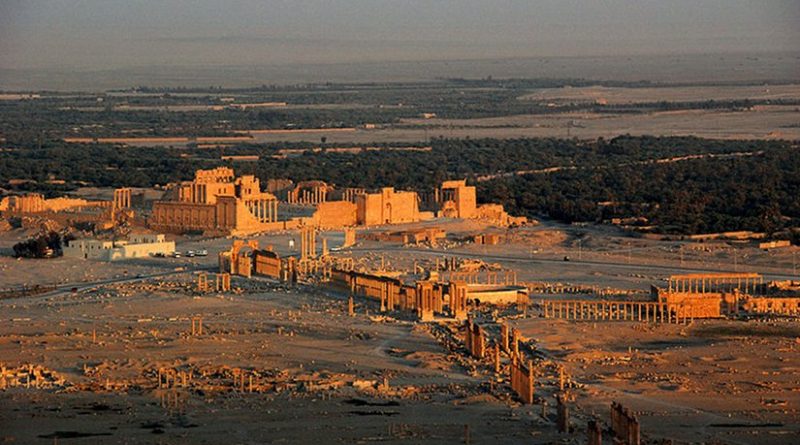 With extremist assaults continuing unabated on striking symbols of Syria’s cultural diversity, the United Nations has condemned archaeological devastation of yet another major World Heritage site. Earlier, in October, it had declared such acts as “war crimes” and assured that those responsible “would be tried and punished”.

After the destruction of Palmyra’s ancient temple of Baalshamin in August, of the Arch of Triumph in Palmyra in October, yet another World Heritage site has fallen prey to fighting in Syria. According to the Syrian Directorate of Antiquities and Museums, parts of the ancient city of Bosra were severely damaged during combats on December 22, 2015.

The United Nations Educational, Scientific and Cultural Organization (UNESCO) responded to the latest such assaults on December 24, alerting the world art market to potential trafficking in artifact from the World Heritage site.

“The destructions sustained by Bosra represent a further escalation in the horror of war and must be stopped at once to allow the concerned parties to consolidate the agreement reached on the ground to preserve the irreplaceable heritage of Bosra,” UNESCO Director-General Irina Bokova said of the site containing Roman, Byzantine and Muslim ruins, including a magnificent 2nd century Roman theatre.

Further deterioration is feared due to severe damage to the western courtyard adjacent to the theatre and to parts of the Ayyubid citadel surrounding it.

The theatre, exceptional due to its architecture and state of conservation, was reportedly built under Trajan, who ruled the Roman Empire from 98 C.E. to 177 C.E. Between 481 and 1251, it became part of the fortifications of a powerful citadel guarding the road to Damascus.

“The Roman theatre of Bosra embodies the rich diversity of the identity of the people of Syria and I call on culture professionals worldwide, and particularly on the art market, to be extremely vigilant so as to fight against the traffic in artefacts from Bosra.”

Bokova has repeatedly condemned the destruction of archaeological and cultural sites in the fighting in Syria and Iraq. Extremists will “never be able to erase history,” she declared in October after the Islamic State in Iraq and the Levant (ISIL) destroyed the Arch of Triumph in Palmyra, another major Syrian World Heritage site.

Bosra, once the capital of the Roman province of Arabia and an important stopover on the ancient caravan route to Mecca, was inscribed on UNESCO’s World Heritage List in 1980.

“The key surviving monuments of Bosra reflect the Outstanding Universal Value of the site,” the UN agency said then.

Destruction of everything that stands for intercultural dialogue

Back in October, the Arch of Triumph in Palmyra fell victim to extremists. “Palmyra symbolizes everything that extremists abhor; cultural diversity, intercultural dialogue, the encounter of different peoples in this centre of trading between Europe and Asia,” Bokova declared then.

“This new destruction shows how terrified by history and culture the extremists are, because understanding the past undermines and delegitimizes the pretexts they use to justify these crimes and exposes them as expressions of pure hatred and ignorance,” said Bokova.

“Despite their relentless crimes, extremists will never be able to erase history, nor silence the memory of this site that embodies the unity and identity of the Syrian people,” she continued.

The UNESCO head also said that there would be no impunity for war criminals, and that UNESCO would make every effort to ensure that those responsible for the destruction of the Arch “would be tried and punished”.

According to UNESCO, the Arch of Triumph was built by Septimius Severus between 193 and 211 AD. It marked the junction between the immense Great Colonnade of the site and the Temple of Bel, also destroyed in 2015.

“The systematic destruction of cultural symbols embodying Syrian cultural diversity reveals the true intent of such attacks, which is to deprive the Syrian people of its knowledge, its identity and history, Bokova declared in a press release.

“One week after the killing of Professor Khaled al-Assaad, the archaeologist who had looked after Palmyra’s ruins for four decades, this destruction is a new war crime and an immense loss for the Syrian people and for humanity,” she added.

According to UNESCO, Baalshamin temple was built nearly 2,000 years ago, and bears witness to the depth of the pre-Islamic history of the country. According to several reports, the building was blown up on August 23. Its cella, or inner area, was severely damaged, and followed by the collapse of the surrounding columns.

The structure of the Baalshamin temple dates to the Roman era. It was erected in the first century AD and further enlarged by Roman emperor Hadrian. The temple is one of the most important and best preserved buildings in Palmyra.

It is part of the larger site of Palmyra, one of the most important cultural centres of the ancient world, famed for its Greco-Roman monumental ruins, repeatedly targeted by Da’esh (also referred to as the Islamic State of Iraq and the Levant, or ISIL) since May 2015.

The art and architecture of Palmyra, standing at the crossroads of several civilizations, is a symbol of the complexity and wealth of the Syrian identity and history, Bokova continued.

“Extremists seek to destroy this diversity and richness, and I call on the international community to stand united against this persistent cultural cleansing. Da’esh is killing people and destroying sites, but cannot silence history and will ultimately fail to erase this great culture from the memory of the world. Despite the obstacles and fanaticism, human creativity will prevail, buildings and sites will be rehabilitated, and some will be rebuilt.”

Such acts are war crimes and their perpetrators must be accountable for their actions, the UNESCO Director-General said on August 24, 2015.