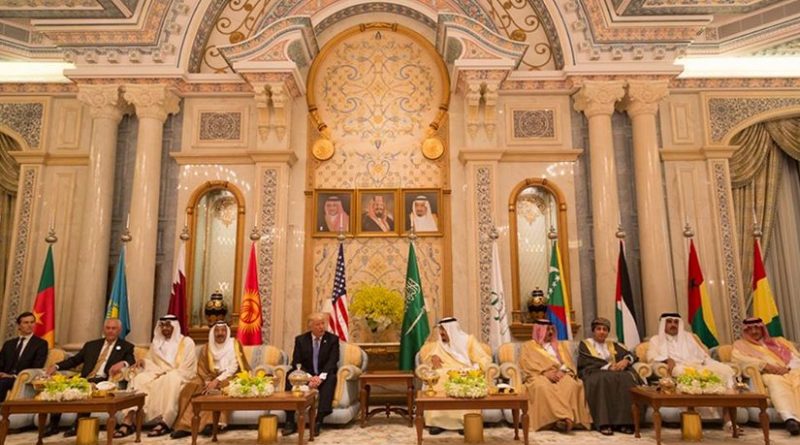 President Donald Trump and King Salman bin Abdulaziz Al Saud of Saudi Arabia attend the meeting of the Leaders of the Cooperation Council for the Arab States of the Gulf Countries, Sunday, May 21, 2017, at the King Abdulaziz Conference Center in Riyadh, Saudi Arabia. (Official White House Photo by Shealah Craighead)

Cracks have appeared in a Saudi-led, US-backed anti-terrorist political and military alliance days after US President Donald J. Trump ended a historic visit to Saudi Arabia. The cracks stem from Qatar’s long-standing fundamental policy differences with Saudi Arabia and the United Arab Emirates about Iran and the role of political Islam.

The cracks emerged as the result of an anti-Qatar media and cyber campaign involving a spate of anti-Qatar articles in US and Gulf media; the blocking of Qatar-backed media websites and broadcasts in Saudi Arabia, the United Arab Emirates and Egypt; statements by prominent former US government officials; and a recent seminar by the Washington-based Foundation for the Defense of Democracies that has long asserted that Qatar supports militant groups.

An earlier attempt by Saudi Arabia, the UAE and Bahrain to force Qatar to align itself with the three states’ hard line positions failed in 2014 when Qatar refused to bow after they withdrew their ambassadors from Doha. The ambassadors returned to their posts after a 10-month absence with little, if any, change in Qatari policies.

The policy differences have rekindled a long-standing rift within the six-nation Gulf Cooperation Council (GCC), the regional association that groups Saudi Arabia, the UAE, Qatar, Bahrain, Kuwait and Oman that is rooted in geography and history. Qatar unlike other Gulf states shares the world’s largest gas field with Iran.

The differences reflect concern among many non-Arab members of the Saudi-led, 41-Muslim nation military alliance that the grouping is becoming an anti-Iranian grouping rather than one focused on combatting jihadism. They also erupted at a moment that Saudi Arabia is looking at attempting to destabilize Iran by fomenting unrest among the Islamic republic’s ethnic minorities – a move that worries Pakistan and other coalition members.

Qatar’s ability to mediate in conflicts involving militant groups like the Taliban and various jihadist groups is a pillar of its troubled effort to project soft power. Its relationship with controversial groups like the Muslim Brotherhood is strategic and goes back to the founding of the Gulf state. The Brotherhood populated key educational and government institutions in Qatar and other Gulf states at a time that they did not have needed professionals of their own.

In Qatar, a country sandwiched between regional giants Saudi Arabia and Iran, both of whom it views as potential threats, the Brotherhood, however, offered something far more strategic: the ability to chart a course of its own. Looking at Saudi Arabia’s power sharing agreement that empowers an ultra-conservative Sunni Muslim religious elite, Qatar used the Brotherhood to avoid falling into what it saw as a Saudi trap.

As a result, Qatar has no powerful religious establishment of its own. Its most prominent Islamic scholar, Sheikh Yusuf Qaradawi, is a naturalized Qatari citizen of Egyptian origin who is associated with the Brotherhood. Qatar’s ruling Al Thani family retains absolute power that it does not have to share.

In one of many contradictions in Qatari policy, Qatar unlike other Gulf states and despite being an autocracy, supported the anti-autocratic popular Arab revolts of 2011, and backed Islamist forces like the Brotherhood in Egypt. Its support explains why Egypt this month joined Saudi Arabia and the UAE in blocking Qatari-backed websites and broadcasts like Al Jazeera and The Huffington Post’s Arabic edition.

Qatar, along with Saudi Arabia the world’s only country that adheres to Wahhabism, a puritan, intolerant interpretation of Islam, has had strained relations with Egypt since general-turned-president Abdel Fattah Al-Sisi in 2013 toppled Mohammed Morsi in a military coup and brutally cracked down on the Brotherhood. Mr. Morsi, a Muslim Brother, was Egypt’s first and only democratically elected president.

The most recent GCC crisis erupted after Qatar charged that remarks attributed to Qatari emir Sheikh Tamim bin Hamad Al Thani that stroked with Qatari policy and were broadcast by state-run Qatar television as well as carried by the Gulf state’s official news agency and various Twitter accounts, were the result of a cyberattack.

Sheikh Tamim was alleged to have suggested that Mr Trump’s administration could be short lived because of problems at home, questioned the wisdom of increasing tension with Tehran and defended Islamist groups Hamas, Hezbollah and the Brotherhood. Qatar has said it is investigating the hack.

Adding fuel to the fire, Robert Gates, a former US defence secretary and director of central intelligence, this week warned at a Foundation for the Defense of Democracies gathering on Qatar and the Brotherhood that Qatar risked losing its hosting of US forces at the Al Udeid Air Base, the largest US military base in the Middle East. “The United States military doesn’t have any irreplaceable facility,” Mr. Gates said.

Ed Royce, the Republican chair the House Foreign Affairs committee, told the gathering that “if it doesn’t change, Qatar will be sanctioned under a new bill I’m introducing to punish Hamas backers.”

Qatar has struggled to downplay the crisis and prove that the remarks attributed to Sheikh Tamim were fake news. Qatar’s problem is that it doesn’t matter whether the news was true or fake. The Gulf state is caught in a Catch-22. It is confronting a concerted Saudi and UAE effort to force it to align itself with the policies of a majority of the GCC. Qatar is doomed if it does and doomed if it doesn’t.