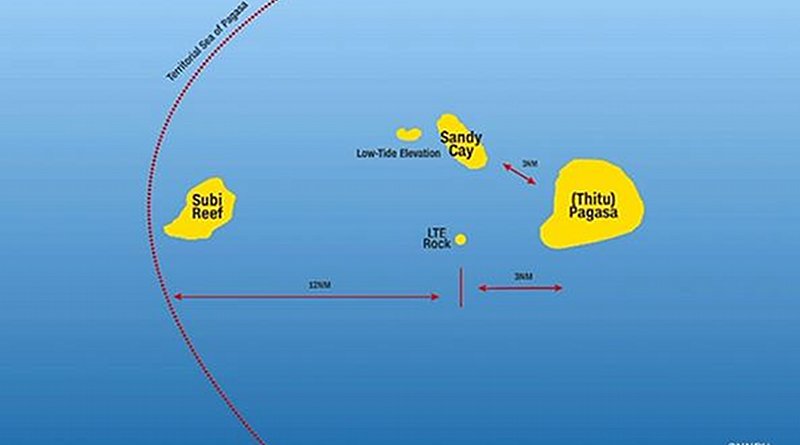 When I began researching South China Sea issues, the topic was often the butt of deprecating jokes from ‘global strategic thinkers’ because they thought the issues were   ‘inconsequential’.  A common comment was ‘sea level rise will solve all the problems there, ‘ implying that the sea will cover all the contested features and thus make the disputes over ownership irrelevant. Such banality woefully underestimated the significance and complexity of these territorial and jurisdictional conundrums. We now know that these disputes could spark serious kinetic conflict. And instead of disputed features in the Spratlys becoming submerged, the reverse has now happened.  A new natural feature –Sandy Cay–has appeared, and become the focus of a dangerous standoff over its ownership.

Sandy Cay is actually three coalescing sand bars situated between Philippines -occupied Thitu (Pag-asa) and China-occupied Subi. They are now above water at high tide. Thus they are legal ‘rocks’ which according to the UN Convention on the Law of the Sea (UNCLOS) entitles them to a 12 nautical mile (nm) territorial sea. A territorial sea is the sovereign territory of a state and this sovereignty extends to the airspace above and the seabed below and of course the associated resources.

Given the sweeping claims to parts of the South China Sea, ordinarily a dispute over the ownership of a sandbar would not be a big deal. But it so happens that the sovereign of these sandbars would significantly enhance its strategic and legal position in the area. This probably underlies the recent tiff between the Philippines and China. China appears to be trying to protect its sovereignty claim over Sandy Cay. https://www.foxnews.com/us/us-envoy-says-china-activities-near-philippines-of-concern

The current contretemps arose in January 2019 when a swarm of about 275 Chinese vessels appeared near Thitu beginning in January 2019. The Philippines declared that the presence of the vessels violated its “sovereignty, sovereign rights, and jurisdiction”. Many thought this swarm was a response to the Philippines construction on Thitu. It may have started out that way, but the focus is now on Sandy Cay and the issue has become much more complicated.

If China were the sovereign of either Thitu or Sandy Cay, or both, it would validate both its claim and occupation of Subi.  Also, if China gains sovereignty over these sandbars, the median line between the sandbars would then be the theoretical legal boundary. In that case, the Philippines would lose much of its claimed territorial sea to the west of Thitu https://globalnation.inquirer.net/174189/analyst-china-maritime-militia-near-pag-asa-threatens-ph-sea-air-access   . The claimants may try to enforce their respective claims in the territorial waters each claims.

China has reason to be concerned about possible aggressive Philippine actions regarding Sandy Cay. In 2017, the Philippines began to build fishermen’s shelters on these sandbars.  China objected and Chinese fishing boats formed a ‘blockade’ to prevent access of Philippine fishermen to Sandy Cay, and from fishing in what it considers its territorial waters emanating from it. It cited the nonbinding 2002 ASEAN-China Declaration of the Conduct of Parties in the South China Sea (DOC) that forbids “inhabiting on the presently uninhabited islands, reef, shoals, cays _ _ _.” https://asean.org/?static_post=declaration-on-the-conduct-of-parties-in-the-south-china-sea-2   Philippines President Rodrigo Duterte ordered the shelters to be dismantled and the construction to stop. In the present situation, China may have feared that the Philippines was about to do something similar again.

This situation is potentially dangerous for all concerned. Heightening the tension and the possibility of a clash, the Philippines Supreme Court has now ruled that the government must enforce international conventions and domestic laws that protect the environment and fisheries at three disputed areas—Scarborough Shoal, Second Thomas Reef and Mischief Reef. https://www.reuters.com/article/southchinasea-philippines/top-philippine-court-orders-government-to-protect-south-china-sea-idUSL3N22F22P

Philippine navy vessels and aircraft as well as China’s coast guard patrol the area.   If Chinese coast guard assets were to clash with or harass Philippine naval assets or soldiers, this could trigger a call for US military assistance.  US Secretary of State Mike Pompeo has publicly declared that “Any armed attack on Philippine forces, aircraft or public vessels in the South China Sea would trigger mutual defence obligations under Article 4 of our Mutual Defence Treaty.” https://www.straitstimes.com/asia/se-asia/us-will-defend-philippines-in-south-china-sea-pompeo

Avoiding this ‘red line’, China is using its fishing boats as a maritime militia to try to intimidate the Philippines. But the U.S. Navy has hinted that in certain circumstances it will treat China’s maritime militia as naval vessels. https://news.usni.org/2019/02/06/cno-richardson-calls-tougher-actions-gray-zone-conflicts-russia-china ; https://japan-forward.com/interview-randall-schriver-not-much-distinction-between-chinas-navy-and-militia-fishing-boats/  However, it should be remembered that the U.S. takes no position on conflicting territorial claims in the South China Sea and this presumably includes territorial seas around such disputed territories. So its military involvement is not a given.

This may mean that the Philippines will have to tread carefully and to work this dispute out with China on its own. Hopefully it will do so peacefully and China will be accommodating to its concerns.  Otherwise the standoff at Sandy Cay could well turn into the confrontation at Sandy Cay—or worse.

Another version of this piece first appeared in The East Asia Forum https://mail.google.com/mail/u/0/#inbox/FMfcgxwCgpZxdFLxzGSShWcWVGfSwlrL