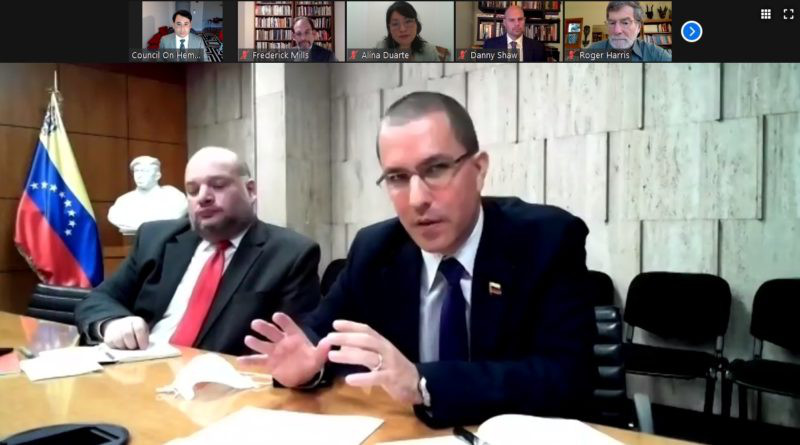 As Venezuelan Foreign Minister Jorge Arreaza spoke to COHA Friday night, five Iranian oil tankers headed to Venezuela in defiance of Washington. Within hours the first tanker arrived through the Caribbean where an armada of US warships were deployed. The Venezuelan navy escorted the Iranian ship into Puerto Cabello serving the El Palito refinery, followed by a second ship. This was a victory for Venezuela and Iran, which are both heavily sanctioned by the US, but have joined in mutual aid.

As Arreaza explained, “Venezuela is in the epicenter of this part of the world because we are trying to build our own democracy our own way.” Before the Bolivarian Revolution, which brought first Hugo Chávez (1998) and then his successor Nicolás Maduro (2013, 2018) to the presidency, for some Venezuela was considered almost a colony under US influence.

Because of illegal US sanctions, Venezuela has been unable to use the international banking system, making it virtually impossible to engage in foreign trade or refinance their debt. This has caused shortages of fuel, food, and medicines and it is further crippling the economy. Arreaza defended the shipment of gasoline and related products from Iran as a legal commercial activity protected by international law. Because of the US blockade, Venezuela has been unable to buy the necessary parts to service its own oil industry or purchase additives to refine its own petroleum. Hence the need to import gasoline to support essential services in this time of pandemic.

Now, Arreaza observed, “the sanctions are much worse than the coronavirus” in terms of the human toll. Over 100,000 Venezuelans have perished from lack of essential medicines and food. But, he added, “I would not say ‘devastating,’ because we have managed to control the situation.”

The key to the incredible resistance of Venezuela has been the unity of the government with the people. “We are not only resisting but we are constructing.”

Arreaza views the American people as Venezuela’s “friends” and “the first victims of imperialism.” “We want a good relationship with Washington, working together. What the US wants is to overthrow our government and establish a government of neoliberalism.” He warned that “If the US were to invade Venezuela, we will respond. Like what happened in Vietnam, we will prevail. But it would be a disaster for both parties.”

Three weeks ago, Venezuela thwarted an incursion of mercenaries, including former US Special Forces veterans. While the US government claimed “plausible denial,” their fingerprints were all over the botched coup. Arreaza revealed that the Venezuelans had infiltrated the operation and knew it was happening. Regretting that eight people had been killed, Arreaza admonished that more of the same is expected because the US backs these acts of aggression and has even posted multi-million-dollar bounties for top Venezuelan officials.

Arreaza denounced Colombia as complicit, doing what the US dictates. He was critical of the Colombian government’s failure to stop the illegal bases inside its territory where some 60 Venezuelan deserters and other paramilitary forces had been training  for the raid into Venezuela with full knowledge of Colombian authorities.

Before Chávez, Arreaza related, the Venezuelan military was viewed by him and most Venezuelans as an occupying army under the control of the US. “Now we have a civil-military union” along with three million armed citizens in the militia. Proof of this patriotic unity came, Arreaza pointed out, when the mercenaries attacked three weeks ago, and local fishermen and the militia were the ones who first detained the invaders.

The US proxy self-proclaimed president for Venezuela, Juan Guaidó, has “broken all the laws.” But it is up to the independent judicial branch of government, Arreaza clarified, and not the executive, to prosecute. Within the opposition, Arreaza explained, Guaidó and his boss Leopoldo López have lost their legitimacy but are still backed by the most powerful nation in the world. So, the opposition has only a “fake unity,” which is unraveling.

Reflective of the democratic aspirations of his government, Arreaza said, “we don’t want a one-party state; we want an opposition.” But Venezuela needs an opposition that is independent of a foreign power and wants to serve the interests of the Venezuelan people. Guaidó, in contrast, has welcomed the sanctions by the US, punishing the Venezuelan people, and has even endorsed a US invasion. Arreaza is hopeful regarding the moderate opposition that is committed to the electoral process. Guaidó, who espouses violent overthrow of the elected government, is finding himself increasingly isolated.

Arreaza espoused a multipolar world, respecting the sovereignty of nations. An informal group of states in defense of the UN charter is developing with allies and friends of Venezuela such as Cuba, Nicaragua, China, Russia, and Iran. “We need international law and not the law of the empire of the US.”

“The future of the world will be different after the coronavirus [passes]; people are rethinking; something new is coming.” The Bolivarian Revolution is now in a better position than three years ago, according to the Foreign Minister. “We are on the right side of history.” Venezuela’s contribution to the world has been, Arreaza concluded, “to prove that we can resist. We know how to resist, adapt, and advance.”

Home » Venezuelan Foreign Minister Jorge Arreaza: ‘We Are On The Right Side Of History’ – Interview