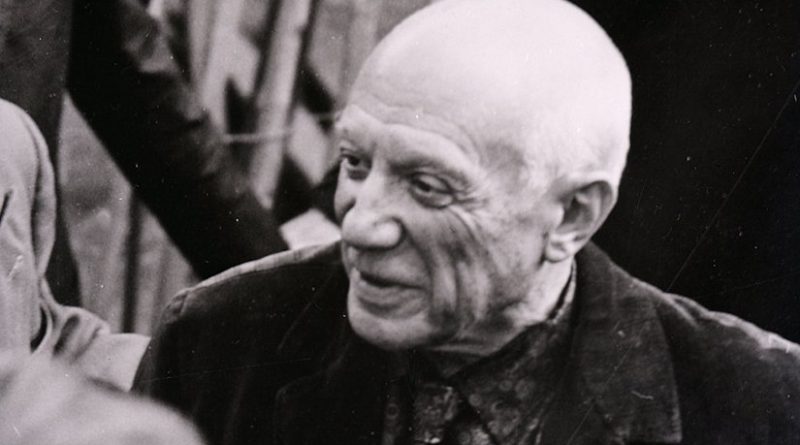 When it was reported that Picasso’s Buste de Femme arrived in occupied Ramallah, after crossing a number of heavily guarded Israeli checkpoints and road blocks, including concrete barriers armed with soldiers and fortified by tanks, another one of Picasso’s paintings should be viewed too. The other painting, of course, is the legendary Guernica, one that should not be seen by Palestinians but by those living in Israel and United States.

In 1937, while Palestine was under a British mandate and Israel was not yet a new nation, Adolf Hitler’s Condor Legion, using the Spanish Civil War as a testing ground, experimented with its new weaponry and blitzkrieg techniques on the residents of the historic Basque town of Guernica. For German military forces, it was a tremendous victory. But for Guernica, its population of 7,000 civilians was utterly decimated.

New fighter planes, like Heinkel 111’s, flew over in waves and for hours, dropped high-explosive and incendiary bombs on Guernica. While innocent civilians tried to flee from a massive inferno, they were strafed by Junkers. German Nazis and Spanish Fascists were quick to use propaganda and blame the atrocity on revolutionary forces. Even though there was international outrage over the destruction of Guernica, no action was taken.

It was Pablo Picasso who painted the bombing and destruction of Guernica, an artistic reminder and monument to “never again.” Sadly, and during World War Two, there were many more Guernicas such as Warsaw, Coventry, London, Berlin, Dresden, and Tokyo. Guernicas have also occurred after World War Two in places like Deir Yassin, Hanoi, Beirut, Santiago, Kabul, Baghdad, Fallujah, and present-day occupied Palestine.

In Picasso’s revolutionary Guernica painting, he reminds one of the horrors of war. On the left, a mother’s face is turned upwards. She screams and cries holding her dead child. In the center, a horse is frantically bellowing while standing over a dismembered revolutionary, who is holding a shattered sword and flower. At right, a woman is falling from a burning house, hands and eyes raised towards heaven, begging for help.

Picasso also discarded his usual colors of blue and pink to intensify the drama of Guernica. The reportage-like photographic mural depicts death raining down. Appalling images of mutilation, death, and destruction are everywhere. But Guernica also centers around a central pyramidal structure. The monumental painting is a powerful political statement against Fascism and the chaos, disorder, and fragmentation that it produces.

Regarding Israeli relations with Palestine, the need for “living space” has been used to raze Palestinian homes and build illegal settlements. Peace and security has been an excuse for war. Blitzkrieg-like tactics have stopped humanitarian flotillas bringing food and medicines to Gaza, and used to raid Palestinian villages. Palestine has served as a laboratory for weaponry, like U.S. fighter jets, drones, and white phosphorous and cluster bombs.

According to news reports, it seemed ridiculous and impossible to bring Picasso’s multi-million dollar Buste de Femme to Palestine. But after a two-year odyssey, the Dutch Van Abbemuseum succeeded in delivering the painting to the International Academy of Art-Palestine in Ramallah. Evidently, Picasso was the academy’s choice nor his iconic status, his political consciousness, and his artistic activism on behalf of peace.

The Palestinian art museum voted to view Buste de Femme, a portrait of a beautiful woman. This is in sharp contrast to the ugliness of Guernica, something that Palestinians have had to endure for years. Picasso was greatly influenced by impressionist and romantic painters who explored the inner world of emotions and imagination. He is also known for Cubism, where natural shapes are transformed into exaggerated shapes and forms.

Cubism was mainly about interpretation rather than realistic depiction. Therefore, Picasso painted people and objects and events as one knew it to be, bringing together in one image many different angles and perspectives as possible. Although criticized by more conservative artists, Picasso helped “free” art from realism. He used sharp angles, various planes and collages which helped pave the way for more abstract artistic expression.

Since Palestinians have no access to import or export artistic items, artists have to work with an Israeli company. Picasso’s painting, then, symbolizes the inner emotions and imaginations of Palestinians and their desire for freedom and a Palestinian state. They also hope that the beautiful and abstract will someday replace the ugly reality Israeli occupation forces and having to live under the shadow of American-made weaponry.

On the other hand, the lesson of Picasso’s Guernica in Israel and United States is the futility of establishing a nation in lands that belong to other people, and then attempting to maintaining a “total” military occupation. Occupations that are backed by punitive blockades and shock and awe campaigns, intermixed with military interventions directed against civilian populations like Operation Cast Lead, paints only broad strokes of death.

Memory and imagination, not war and endless military occupations, are the greatest instruments for peace. Will Picasso’s mysterious, yet realistic, artistic activism in Guernica-indiscriminate death from the air and land and sea-allow us to feel and act with new perspectives, especially when thinking about life and death, both our own and other people’s?(1) Will his artistic language free us from our addictions to militarism and war?

– Dallas Darling is the author of Politics 501: An A-Z Reading on Conscientious Political Thought and Action, Some Nations Above God: 52 Weekly Reflections On Modern-Day Imperialism, Militarism, And Consumerism in the Context of John‘s Apocalyptic Vision, and The Other Side Of Christianity: Reflections on Faith, Politics, Spirituality, History, and Peace. He contributed this article to PalestineChronicle.com. Visit: www.beverlydarling.com and wn.com//dallasdarling.