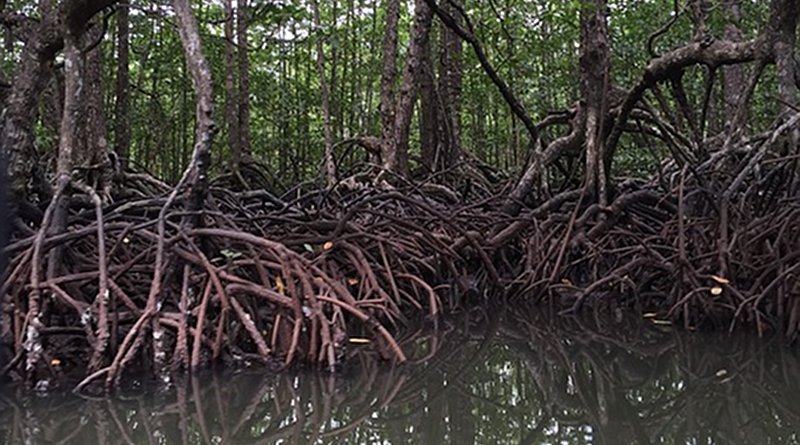 The remaining mangrove ecosystems the world over, are facing serious destruction, much of which may be irreversible.

This sad assessment greeted the International Day of Mangroves on July 26, from marine biologists and environmentalists worldwide who are studying the effects of human activities on mangrove forests.

More than 35 percent of the world’s mangrove forests have been lost in the past two decades, losses that exceed those for tropical forests and coral reefs, deplored Dr. Ivan Valiela,  professor of biology at the Boston University Marine Program and American Institute of Biological Sciences.

And that is not all. Close to 40 percent of the remaining mangrove forests suffer from human alterations created by conversion of mangroves to mariculture, agriculture, and urbanization, as well as forestry uses and the effects of warfare, Prof. Valiela revealed.

The loss of mangroves is serious and continuing at rate of approximately 1 percent yearly which is 3 to 5 times higher than the overall global forest loss, he said.

Mangrove forests, vital ecosystem in the important tropical environment, has received much less publicity regarding their destruction, compared to forests being felled and coral reefs undergoing bleaching such that concern about the magnitude of losses of mangroves has been voiced mainly in the specialized literature, the marine biologist lamented.

Mangrove forests  are vital in providing breeding, sanctuary and habitat for fish and many forms of marine life.

They are sources of important medicine for the human world, and provide a wide range of goods to human communities such as wood and non-wood forest products.

More importantly, they play a crucial role in carbon dioxide sequestration, cooling of the earth, natural buffers against tsunamis and coastal protection, recreation, ecotourism, and as nursery and feeding grounds.

The World Mangrove Atlas shows mangroves are distributed in 123 countries in the world with Asia having the most followed by Africa, north and central America, Oceania and South America.

According to Prof. Dr. Shigeyuki Baba, Executive Director of the International Society for Mangrove Ecosystems (ISME) based in Okinawa, Japan, from 1980-2005, the worst mangrove destruction happened in East Asia where 33.4 percent of its total mangrove area was lost.

Next is the Pacific Islands which lost 28.8 percent, Southeast Asia, 26.5 percent; north and central America, 23.3 percent and South Asia, 17 percent.

The Working Group on Mangrove Ecosystems of the International Union for the Conservation of Nature (IUCN) Commission on Ecology in cooperation with the United Nations Environment Programme (UNEP) and the World Wildlife Fund (WWF) said globally, vast mangrove areas are being destroyed intentionally and as a secondary result of other activities, largely economic in nature.

It said, over-exploitation by traditional users the primary reason.

And as the world population sky-rockets, pushing resource extraction to the limits, destructive action resulting from clear-felling, diversion of freshwater, conversion to agriculture and aquaculture, salt ponds, settlement mining /mineral extraction, liquid waste disposal, solid waste/garbage disposal, bomb tests, and spillage of oil and hazardous chemicals are threatening to wipe out all mangrove forests, it warned.

The world’s growing need for sand  to whet  its appetite for the construction of urban infrastructure is the latest dagger to the mangrove heartland.

In Puerto Rico, mining for sand and the removal of most of a coastal dune for the construction of a large airport led to the eventual destruction the last mangrove tract in northern Puerto Rico.

As a result, winter storm waves breached the residual dune on repeated occasions and large amounts of sand were washed into the adjacent mangrove swamp.

Defoliation rapidly ensued and trees died where sand deposition was in excess of 30 cm.

Mining of sand from coastal dunes or from offshore structures which shelter coastal mangrove swamps continue to this day, if it does not stop, the damage will be irreversible.

Mangrove Depletion Due to Charcoal-Making

They said the Philippines currently has thirty to forty mangrove species belonging to fifteen families which makes the nation one of the top 15 most mangrove rich countries in the world. It holds at least 50% of the world’s approximately 65 mangrove species.

But many of these are now struggling to survive against human-induced destructive activities, they added.

The loss is a result of a mangrove depletion rate of 2 percent to a high of 8 percent in some areas annually for the past ten years, they said.

And charcoal making is a major culprit, kept alive by the millions of rural and urban poor who rely heavily on charcoal for energy needs in this non-oil and non-petroleum producing  country enslaved by expensive fuel imports.

Fishponds in the Philippines are predominantly used for the culture of Milkfish or Chanos chanos. The rapid development has led to the area devoted to fishponds where mangroves that bred non-fishpond denizens were destroyed to give way to milkfish production. From 1950 to 1962, some 70,000 ha of mangroves were converted into fishponds.

They say that nature is the best teacher and indeed, humans have learned the hard way after the chilling 2004 tsunami and 2013 typhoon Haiyan left thousands dead in Asia.

Once more people were planting trees in their mangroves from Sri Lanka, Thailand to the Philippines.

They fully realized that mangroves form low-lying thickets that hug the shore and protect coastal areas from storms, hurricanes typhoons and storm surges in tropical regions around the world.

By realizing this, and acting pro-actively, perhaps people need not to be reminded now and then that caring for the earth is as important as their other basic needs, without death rearing its ugly head.