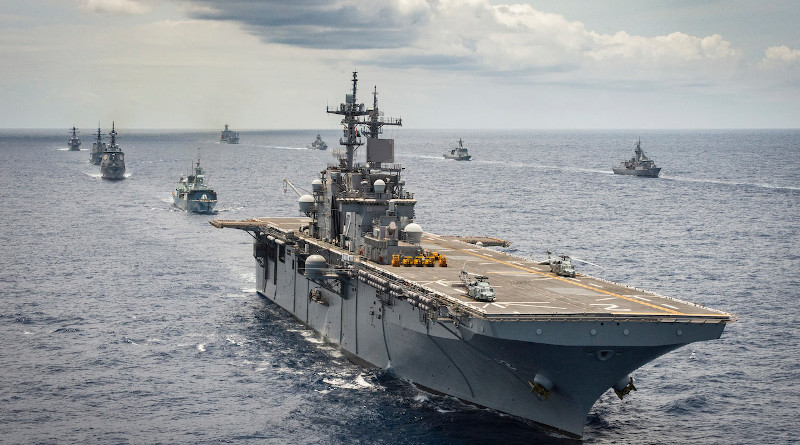 A multinational naval force steams in formation off the coast of Hawaii during Exercise Rim of the Pacific 2020, Aug. 21, 2020. Photo Credit: DOD

Defense Secretary Dr. Mark T. Esper arrived in Hawaii, beginning a trip to explain America’s vision for a free and open Indo-Pacific and to honor the World War II generation that made a peaceful region possible.

The secretary will visit Hawaii, Palau and Guam.

The Indo-Pacific is the main focus of American national strategy. The region is crucial to the U.S. economy, and U.S. service members are crucial to maintaining peace and stability in the region.

The National Defense Strategy issued in 2018 said the return of great power competition with China and Russia is the main danger to the United States and the world.

”This is an opportunity for the secretary to really reinforce what we’re doing to advance this vision for a free Indo-Pacific,” said a senior defense official speaking on background. ”The vision is based on some broadly held principles — peaceful resolution of disputes; freedom of navigation; free, fair and reciprocal trade arrangements — the things that have kind of made the international system work.”

In the Indo-Pacific, China is challenging these principles. China is building and militarizing islands in the South China Sea and East China Sea. China is using its economic power to coerce nations around the world to its point of view.

Esper will talk about what the United States is doing to reinforce and uphold the principles of the international rules-based order.

During the visit, the secretary will visit ships involved in the semi-annual Rim of the Pacific exercise. The exercise has been scaled back due to COVID-19, but more than 5,000 personnel from 10 different countries are participating. The exercise allows the nations to test interoperability and cooperation across the spectrum of conflict.

RIMPAC also highlights the alliance system in the Indo-Pacific. ”Even during the current pandemic, we’re still able to operate in pursuit of common tasks,” the official said.

Guam is a centerpiece of American strategy in the Indo-Pacific, and Esper will visit with troops and visit facilities that are being built.

The secretary will also participate in ceremonies marking the 75th anniversary of the end of World War II. He will visit Palau – the site of the bloody Battle of Peleliu in 1944 — and mark the end of the war during a ceremony aboard the USS Missouri. The Japanese signed the surrender documents aboard the Missouri in Tokyo Bay on Sept. 2, 1945.

World War II still resonates today. The experiences of the war – with millions killed, untold treasure destroyed and huge upheaval – was the impetus behind establishment of the rules-based international order as a means of preventing the type of great power competition that brought on the war. Those rules are still important 75 years later, officials said, and they need to be protected.