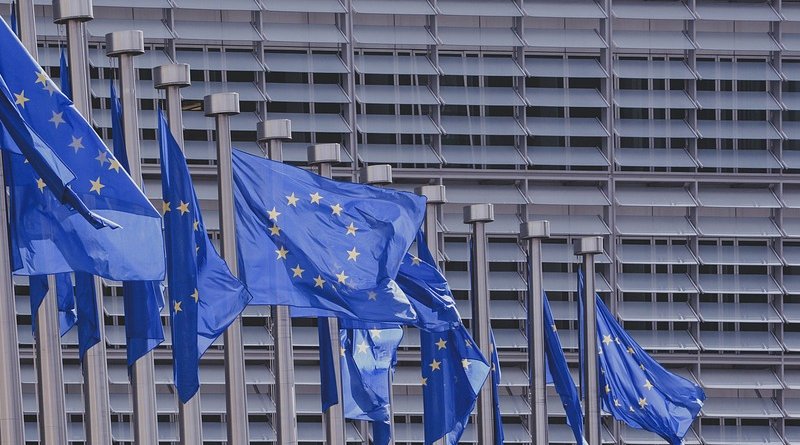 The European Union, as a supranatural and complex systematic institution has sophistically transformed the basic propositions of its agenda and utterly altered the notion of regional trade to worldwide objectives which includes the promotion of diplomacy, maintenance of international peace, human rights protection, humanitarian aids at critical conditions, infrastructure development, multilateral trade and partnership with international community.

Following the European enlargement and eastward expansion policies, European union accredited an important agreement known as Treaty of Lisbon 2009, to bring new reforms to structuralize the European political and diplomatic system. It has established the European external and foreign action services to facilitate and ensure mainstream agenda of EU for the promotion of multilateralism and diplomacy.

The High Representative of European Commission Federica Mogherini said that, “our neighbour strength is our own strength and our global strategy is formulated to make a strong strategic alliance like NATO”.

European external action services collaborate with other EU institutions while formulating the foreign policy of EU. There are two prominent oppositions and dichotomic actors in EU, one is striving strenuously for continuation of collective responsibilities of all member states to strengthen the European union, and another actor is intended to again unify and resuming the nationalization of political mechanism of European union to secure the future of nationalism.

Jean Monnet, the proponent of the European Union delineated that “reciprocity amongst various sections of statecraft will help to harmonize all the contracting parties for smooth functioning of state affairs”. Similarly, this theme was followed by neo-functionalism theorists, who proclaimed that “regional and global integration is possible through amalgamation of various institutions and it would have a ripple effect over other institutions to integrate all institutions under one single domain which would lead to cooperation and conflict management. For example, economic activities between states would have a distinctive impact over political, social affairs of contracting states” this phenomenon is known as “spill over effect”.

For instance, the technological innovations explicitly transformed the paradigm of world and gradually it’s still evolving in contemporary international politics, because following factors explicitly effected the evolving nature of world; states, rise of civil societies and international organizations, the MNCs, IOs, IGOs role are becoming much significant as compare to various states. So, the technological innovations, modernization paved way to establish international organizations and ultimately it helps these institutions to dominate the world by expansionist policies.

The Lisbon Treaty also proposed to preserve peacebuilding measures and to abstain conflicts, there must have exigence to establish a framework for international and regional security, this is always possible through systematic and well efficient method. Since last two decades, EU is engaged to supports conflict prevention and peace management. Any turbulent conflict always leads to loss of precious lives, decimation of infrastructure and economy, people displacement, exacerbated human living standard, underestimation of national, regional and international security which obviously create inevitable political turmoil and chaos.

A generic strategy of EU is based on provision of international and regional security to its citizens, geostrategic and defence cooperation with rest of the world, financial assistance to member states and other close allies, transformation of violent conflict to peace and stability, conduction of various exercises with other countries to strengthen their respective governments, promotion of modern diplomacy, share vision and common action with member states, utilizing the potential capabilities of its citizens, provide the global security and to improve the living standard of its people. This is defined as a major content of European union to facilitate the wider objectives of organization. European union is also working to overcome and mitigate the global risks like climate changes, large scale illegal migration/refugees, water crisis, man-made environmental destruction, focusing on defence capabilities and anti-terrorism etc. These above-mentioned challenges help European Union to expend its role to other region of world to brings reforms and advancement by implementing EU policies.

If we have to demonstrate “the role of European union as a global conflict manager” then there are bulk of conflicts, which become the major priority of EU`s member states to resolve them, for example; the dispute between Bosnia and Kosovo resulted to war, European Union tries to bring them up at negotiation table but EU was unable to conclude the dispute at a common covenant, the USA’s intervention  along with EU following a systematic channel  and  after ten years of struggle various states recognized Kosovo as an independent state. To maintain the liberal world order, EU helps countries like Bosnia, Kosovo, USA, KSA, Iran, Myanmar-Burma, Yemen, Syria, Ukraine, Crimea, Afghanistan, Venezuela, Israel and Palestine to settle down their disputes through negotiation and mediation.

The EU is still active in ongoing conflicts of Ukraine, Syria, USA and Iran impasse to find a most feasible solution for conflict transformation. “A conflict management strategy of EU can be its interest and goals in area of conflict management, assessment of EU’s strengths, capabilities and weaknesses in conflict prevention, a compatible theoretical approach to alleviate the global conflict”. EU analysts argue that our policies are not restricted at geographical level but to implement them at wider array.

The EU works as a conflict manager and amazingly expended its influences to brings peace, tranquillity and political stability across the world but due to inefficient internal governance system in EU itself, created various formidable crises for this organisation to deal with it. which enlist UK departure from EU, rise of nationalism, populism and left-wing parties, dispute between Croatia and Slovenia, Spain and Catalonian dispute etc which threatened the European union’s credibility.

In the current status-quo, the EU has escalated developmental activities in Asian and African continent to dominate these regions and striving to improve multilateral nexus with these countries. Furthermore, growing influence of effective foreign policy of Russia in these regions also jeopardize the interest of European Union.

A significant transition in European Union is departure of Brexit, which is a handicap in EU’s Foreign policy. There should be a conspicuous pattern within EU to fortify the interest of organization, decision-making body must have to struggle for lenient policies to facilitate member states.

If the EU has proposed a long term set of rules for migration and refugees, bolstering pluralism and cooperation by mutual consent then it could ultimately attract British citizens to review at previous decision. Otherwise, there’s a legal and constitutional political process “Article 50 of European Union”, which leads to decide the fate of Britain. There are adverse and severe implications of Brexit for both EU and Britain. Because, it would weaken EU as losing a great geopolitical player and also a permanent member of UN security council and similarly, Britain could face issues like sanction, increasing tariffs, trade agreements, financial remittances with remaining 27 European states, freedom of movement, Visa policy, displacing millions of employees at both sides, diminishing authority and power, border management issue etc., European custom union etc. are top listed challenges.

Historically, the United States of America has strong nexus with EU and both are world largest Bilateral trade partners having $1 trillion worth trade per annum. In current political arena, these relations are getting deteriorated due to several reasons. In 2018, imposition of high tariffs by Trump regime over EU’s steel, aluminum, automobile import products adversely effected the EU-USA bilateral relations.

Jean Claude Juncker meeting with Trump was a substantial reason to have a compatible agreement to establish zero tariffs, non-tariffs over certain products. Similarly, there is a clash between EU and American administration over Iran Nuclear deal, which will also damage the national interest of EU. If we elucidate about EU-South Asian ties, then EU has always dominated this region through trade and financial assistance. Security conditions are significantly critical in Pakistan and Afghanistan, EU are intended to normalize the security threats through bilateral negotiation for smooth functioning of states affairs. Considering Kashmir issue between Pakistan and India, EU along with UN work as a mediator and calls to resolve conflicts with bilateral negotiations.

Furthermore, the US withdrawal from various international treaties like; Paris climate agreement, halting the trade between transatlantic region, USA withdrawal from Joint Comprehensive plan on action to re-impose sanctions over Iran, refusing more contribution to UN, are diverting the American policy towards European region. President Donald Trump is intended to make “America Great Again” and these above steps are series of chain to achieve this objective at any cost.

According to the European Committee on Foreign Relations “The EU and USA relations are deteriorating since last two years, its also badly effecting the common interest of both partners, there must have an attainable solution to restore Bilateral relations”. Recently, Trump publicly supported the Britain withdrawal from EU and he narrated that “I would say Britain are better off without EU and I know Great Britain very well, I have a lot of investment over there. He also shows empathy for British peoples who are in favor Brexit and stated that nation-state concept is only a reason for harmony, political peace and stability of Europe”. Thus, if we conclude the European union as a key actor of conflict management then EU has rigorously struggled to promote the objective of organization “preserve peace, prevent conflict and conflict management”. Still, EU is active mainly in all global regions to protect liberal democratic and moral values by resolving the conflicts through negotiation and mediation. Once Ronald Reagan said that “Peace is not absence of conflict, it is the ability to handle conflict by peaceful means”.

*Zakir Ullah is an Independent Researcher, based in Islamabad, Pakistan, holds a graduate degree in international relations and has a keen interest in International Political Economy, Geopolitics, Defence and Strategic Studies and Foreign affairs. Zakir can be reached at [email protected]