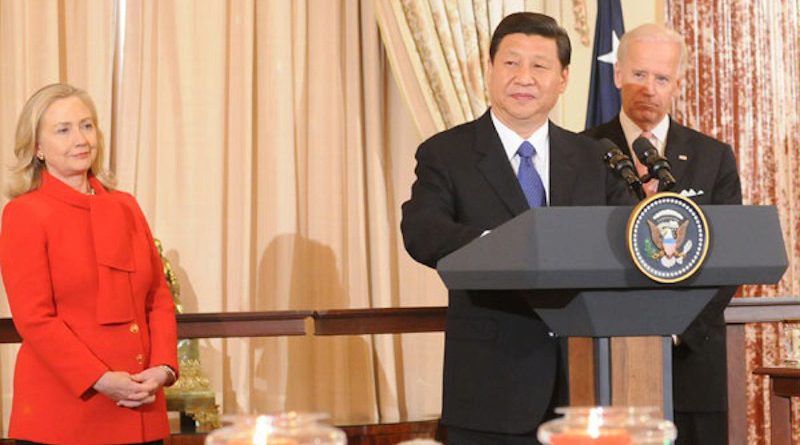 Despite US President Donald Trump’s refusal to concede, the 2020 US presidential election is over and former vice president Joe Biden has started the presidential transition formally. Many in Beijing, Washington and elsewhere hope the incoming Biden administration will bring US–China relations back from the cliff edge. But it may be wishful thinking that the new administration can easily buck the trend and reset the relationship.

Biden, who is to be inaugurated on 20 January 2021, faces daunting domestic challenges, particularly an intractable COVID-19 pandemic and a faltering economy. He has invited scientists into his transition team to prepare for arduous work facing his administration. Cooperation with China may prove essential for his success in tackling the pandemic and US economic woes. As global COVID-19 cases continue to surge, it is crucial for the two governments to work together to end this global health crisis soon.

One election will not erase all the underlying US–China frictions. China’s rapid rise challenges US dominance on many fronts, from technology to global governance. From the US perspective, no matter who is in the White House, the United States needs to do everything possible to push back against China’s challenge to its power, prestige and liberal values.

US politicians of all stripes seem to agree on one thing: the United States must be tough on China. Many argue that attempts at engagement by previous US administrations have failed to transform China and that China now poses an enormous threat to US national interests.

The US–China relationship has been so severely impaired over the past few years that it is beyond easy repair. All the red buttons in the relationship are turned on, from Taiwan to the South China Sea, and from trade to high-tech.

One must also be prepared for what a reckless Trump administration may do in its final days to the already damaged relationship. During a radio interview on 12 November, the outgoing US Secretary of State Mike Pompeo asserted that ‘Taiwan has not been a part of China’, clearly crossing Beijing’s redline. The Trump administration may well ‘smash a pot to pieces just because it’s cracked’, leaving behind a mess for Biden to clean up.

The two countries continue to suffer from mutual distrust due to their different political systems. Some US officials and members of Congress now frequently use ‘the Chinese Communist Party’ (CCP) to refer to China. The US government has renewed its attacks on the CCP and its political ideology. Yet the Chinese leadership, based on its touted ‘four confidences’, has developed an inflated sense of confidence that the United States is declining and that China is moving to the centre of the global political stage.

The Biden administration will likely make human rights a key issue, given the current situations in Xinjiang and Hong Kong. The Chinese government’s inflexibility on what it considers sovereignty issues, such as Taiwan and Tibet, makes it difficult to compromise with the United States. While Biden may be less confrontational and will introduce a degree of stability in his China policy, it is premature to paint a rosy picture of the relationship for the next few years.

Many suggest that Biden may return to multilateralism and work with US allies and partners to address the China challenge. The recent signing of the Regional Comprehensive Economic Partnership — the world’s largest free trade pact that includes China and several US allies — suggests that such an approach may not work as countries move further away from the US economic orbit.

People-to-people exchanges form the bedrock of bilateral relations. Unfortunately, the Trump administration terminated the Fulbright and Peace Corps programs in China and placed restrictions on Chinese scholars and students doing scientific research in the United States. The two countries have also been engaged in a race to the bottom to expel journalists and limit the operations of each other’s media outlets.

US public opinion has turned against China, partly due to the pandemic in an election year and partly due to combative Chinese behaviour. According to an October Pew Research Center survey, US negative views of China jumped to 73 per cent. This is the highest unfavourable rating since former US president Richard Nixon’s visit to China in 1972.

The problems in the bilateral relationship are also caused by power restructuring in the international system. Given China’s economic size and its global investments, it is unrealistic to expect China to continue to keep a low profile in international affairs. The massive Belt and Road Initiative — China’s effort to promote international development while projecting itself as a responsible power — is viewed with suspicion and alarm by the United States. The United States worries about being replaced by China as the world’s pre-eminent power.

Rising US populism and growing Chinese assertiveness have become major forces pushing the two countries toward a collision course. Leadership change in Washington provides an opportunity for some soul searching about the plunging relationship, but the road ahead remains rocky.

*About the author: Zhiqun Zhu is Professor of Political Science and International Relations at Bucknell University, Pennsylvania.

Source: The article was published by East Asia Forum

Home » Rocky Road Ahead For Biden On US–China Relations – Analysis