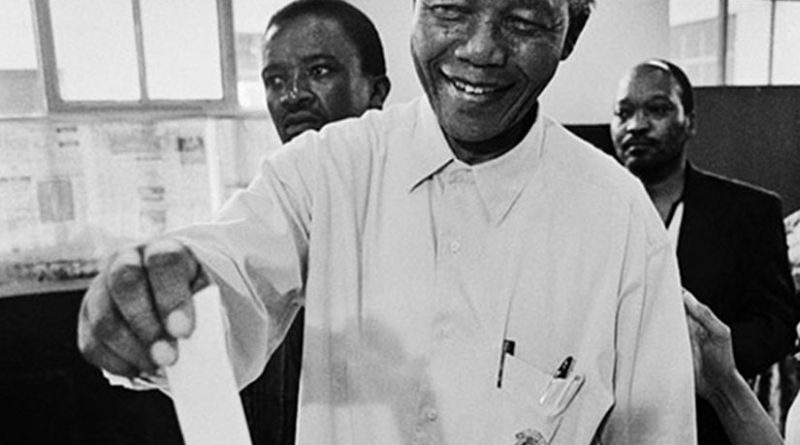 I HAVE just seen the new movie “Mandela”, and I am so full of impressions that I cannot abstain from writing them down.

It is a very good film, with very good actors. But that’s not the main point. It is a very accurate film, depicting what actually happened in South Africa, and one cannot help thinking about it again and again.

What do I think?

IF ONE had asked any South African, black or white, some 35 years ago how the conflict would end, the answer would most probably have been: “It will not end. There is no solution.” That is exactly the answer one receives today In Israel and Palestine.

There could be no solution. The vast majority of black South Africans wanted freedom and black rule. The great majority of the Whites, both Boer and British, knew that once the Africans assumed power, the Whites would be slaughtered or driven out. No side could possibly back down.

Yet the incredible, the unimaginable, happened. The blacks won. A black president assumed power. The Whites were neither slaughtered nor evicted. Some say that they are today in many ways more powerful than the Blacks.

We have got used to this so thoroughly that we are not conscious anymore what a miracle it is.

When Algeria was freed, after a long and brutal war of liberation, more than a million “colons” fled for their lives. The huge exodus was not imposed. President Charles de Gaulle just let it be known that the French army would leave at a certain date, and all the colons fled helter skelter. An immense number of local collaborateurs were butchered.

That is the normal course of events when colonial rule comes to an end after a long period of brutal oppression. As Friedrich Schiller wrote at the beginning of the colonial era: “Fear the slave who breaks his chains!”

As the film clearly shows, they were thirsting for revenge. They had suffered unspeakable indignities for many decades. Not abstract ones. They had suffered daily humiliations in the street, in the parks, at the railway stations, everywhere. They had not been allowed to forget for a moment that they were black and inferior, indeed subhuman. Many had spent time in inhuman prisons.

So it was natural that on the day of liberation they would fall upon their torturers, burn, kill, destroy. Mandela’s own wife, Winnie, led the demand for revenge. She incited the masses.

The movie shows how Nelson Mandela, completely alone, threw himself against the rising wave. At the decisive moment, when everything hung in the balance, when history held its breath, he addressed the masses on TV, telling them bluntly: “If I am your leader, you will follow my course! Otherwise, look for another leader!”

His approach was rational. Violence would tear the country apart, perhaps beyond redemption, as had happened in some other African countries. The Blacks would live in fear, as the Whites had lived all through the apartheid era.

And, incredibly, the people followed him.

YET MANDELA was not a superhuman being, He was a normal person, with normal instincts. He had been an honest-to-goodness terrorist, who had sent people to kill and be killed. He had suffered years of brutal treatment, both physical and mental, years of imprisonment in isolation, which could have driven him to insanity.

Still in prison, and against the will of his closest comrades, he started negotiation with the leaders of the apartheid regime.

Could there have been a Mandela without a Frederik Willem de Klerk? A good question. The film does not dwell on de Klerk’s personality. But here was a man who understood the situation, who agreed to what amounted to almost complete surrender to the despised “kaffirs”, and who did so without shedding a drop of blood. Like Mikhail Gorbachev, in different circumstances, he supervised a bloodless historic revolution. (Curiously enough, “kaffir”’ the White racist term for blacks, is derived from the Arabic and Hebrew term for infidels.)

Mandela and de Klerk were perfectly matched, though one could hardly imagine two more different individuals.

WHAT CAUSED the abomination of apartheid to collapse?

Throughout the world, including Israel, the received wisdom is that it was the global boycott imposed on the apartheid state which broke its bones. In dozens of countries, decent people refused to touch South African goods or to take part in sports events with South African teams, thus turning South Africa into a pariah state.

All true and admirable. Everybody who took part in this world-wide upsurge of conscience deserves respect. But to believe that this was the decisive element of the struggle is itself a symptom of Western condescension, a kind of moral colonialism.

The film devotes to these world-wide protests and boycott just a few seconds. Not more.

It was the heroic struggle of the South African masses, mostly black, but also Indian (descendents of immigrants) and colored (mixed race), that achieved victory. The means were armed struggle (always called “terrorism” by the oppressor), non-violent mass action and mass strikes. Foreign support served mainly to raise morale.

Mandela was not only one of the main leaders of this struggle, but also an active participant, until he was sent to prison for life.

From the film one could gain the impression that there were two Mandelas – the leader of the armed struggle, who shed blood, and the maker of peace, who became a world symbol of tolerance and forgiveness.

Yet these two Mandelas are one and the same – the personality of a man who was ready to sacrifice his life for the freedom of his country, but who was also magnanimous and forgiving in victory.

He completely conformed to the ancient Jewish saying: “Who is a hero? He who turns his hater into his lover.”

AN Israeli is compelled to ask himself the inevitable question: What does the film tell us about the similarities and dissimilarities between the South African and the Israel-Palestinian situations?

The first impression is that situations are almost totally different. The political and demographic backgrounds are poles apart. The similarities are mostly superficial.

But in particular, the most obvious differences are: There is no Palestinian Mandela in sight, and even less an Israeli de Klerk.

Mandela himself was a passionate supporter of the Palestinian cause. He saw in Yasser Arafat his soul mate. There is indeed a similarity: like Mandela, Arafat started a violent revolutionary struggle of liberation (terrorism), and like Mandela he decided to make peace with his enemy (Oslo). If Arafat had been tall and handsome like Mandela, perhaps the world would have treated him differently.

In his anti-Zionist attitude, Mandela resembled Mahatma Gandhi, whose ideas were formed in the 21 years he spent in South Africa and suffered its racism (before apartheid was officially enacted). Gandhi had a Muslim first name (Mohandas, “engineer” in both Arabic and Hebrew). However, while Mandela’s creed of forgiveness did win, Gandhi’s non-violent creed failed. The liberation of India was accompanied by untold violence, with at least half a million Muslims and Hindus dead – including Gandhi himself.

The movie ends with Mandela’s election as president, hailed by both Blacks and Whites.

Ancient historiographers described steppe nomads as violent people dedicated to warfare and plundering. Little archaeological and anthropological data are however