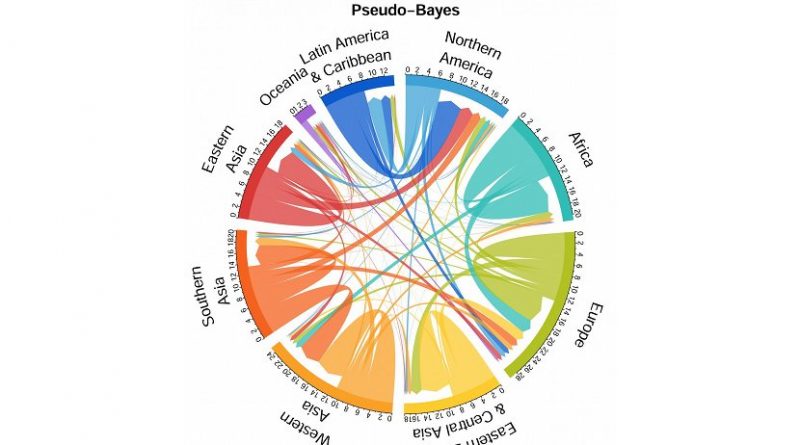 On today’s increasingly crowded globe, human migration can strain infrastructure and resources. Accurate data on migration flows could help governments plan for and respond to immigrants. Yet these figures, when available, tend to be spotty and error-ridden, even in the developed world. Researchers have developed approaches to estimate migration rates, but even the best of these rely on unrealistic assumptions about the mass movement of people and yield migration rates that can fall far below reality.

In a paper published the week of Dec. 24 in the Proceedings of the National Academy of Sciences, two scientists at the University of Washington unveiled a new statistical method for estimating migration flows between countries, using the so-called pseudo-Bayes approach. They show that rates of migration — defined as an international move followed by a stay of at least one year — are higher than previously thought, but also relatively stable, fluctuating between 1.1 and 1.3 percent of global population from 1990 to 2015. In addition, since 1990 approximately 45 percent of migrants have returned to their home countries, a much higher estimate than other methods.

These more accurate estimates of migration will ultimately help both migrants and the people who assist them, said senior author Adrian Raftery, a UW professor of statistics and sociology.

“Planning for migration is no simple task,” said Raftery. “You need everything from medical infrastructure and trained personnel to elementary schools — and governments rely on accurate demographic estimates to help them put the right plans and responses into place.”

Countries collect migration data through immigration forms at ports of entry, but answers on these forms may contain mistakes, and often fail to collect the types of comprehensive information that demographers need to measure migration accurately. Census forms also tend to ask people where they were born, but usually not when they moved, information which does not accurately reflect the true level of movement.

“Migration is much more than the place you left and the place you ultimately settled in,” said Raftery. “Researchers have tried for years to develop statistical methods that capture the comprehensive picture of human migration across the globe.”

Raftery developed these new migration rate estimates along with his former doctoral student Jonathan Azose, a UW affiliate assistant professor of statistics and the paper’s lead author. They applied the pseudo-Bayes method to migration estimates by incorporating elements of other methods, and calibrated their estimates against a relatively reliable model of migration among 31 European countries.

Azose and Raftery tested the accuracy of pseudo-Bayes against a set of reliable migration figures and discovered that its estimates were typically accurate to within a factor of three, better than many existing estimates.

“For the migration field, this level of accuracy is a significant improvement,” said Azose. “Even when you look at data from European countries, it’s not uncommon for a single migration flow to have estimates that differ by a factor of three or more depending on whether the sending or the receiving country collected the data.”

They also discovered that, compared to other approaches, pseudo-Bayes can more accurately account for return migration, in which migrants go back to their home countries.

“Our estimate shows a higher global flow of migrants in large part because it indicates that return migration is much higher than previously thought,” said Azose.

The researchers estimate significantly higher migration rates than prior methods — between 67 million and 87 million migrants over each five-year period from 1990 to 2015. By comparison, one widely used alternative method, which only estimates the minimum rate of migration, calculates just 34 to 46 million migrants in each five-year period. In addition, while the total number of migrants estimated by pseudo-Bayes increased from 1990 to 2015, the migration rate over that period remained relatively stable as a proportion of global population — between 1.1 and 1.3 percent.

“We estimate a rate of return migration that is significantly higher than other methods, but it is also supported by history,” said Raftery. “For example, during the Rwandan genocide in 1994, more than a million migrants left the country, but most returned within three years after the conflict ended.”

The top migration rates that they observed more recently between countries were consistent with ongoing world events. Migration out of Syria, for example, accounted for two of the top three emigration flows from 2010 to 2015.

The researchers would like to refine their method by differentiating between refugees, which are counted by their method, and other types of migrants. In addition, they would like to incorporate data from non-governmental sources, such as social media records, to improve the accuracy of their estimates, as well as develop approaches to forecast future migration.