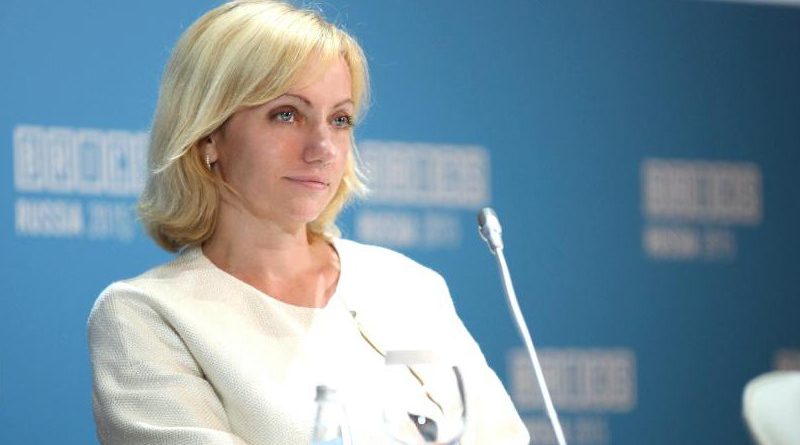 In this interview, Alena Peryshkina, Co-Chair of the BRICS Civil Forum, Director of the AIDS Infoshare Foundation, Co-Chair of the BRICS and G20 CSOs Working Group, discusses some aspects of multicultural dimensions, especially the need to institutionalize cultural ties and further points to developing a mechanism for evaluating and monitoring the implementation of NGOs recommendations under BRICS. Below are the excerpts of her interview:

What aspects of cooperation strike you most during online roundtable discussions on “International Cultural Cooperation for Strengthening BRICS Unity” organized in Moscow?

Peryshkina: It is really worth noting that the discussions on “International Cultural Cooperation for Strengthening BRICS Unity” were extremely interesting. Our roundtables covered a wide range of issues in the field of culture and the most fruitful dialogues were about institutionalization of cultural ties, development of people-to-people exchange through literature and art, and the most urgent issues in protection of the BRICS cultural heritage.

In your opinion from BRICS 2020 Chair’s position, how important could cultural cooperation strengthen unity among BRICS? Do you agree that there are diversities in culture among the group?

Peryshkina: Certainly, the cultures of the BRICS countries are very diverse and very different from one another. But our cultural ties are getting stronger, since they are based on the values that unite peoples, and therefore states. Cooperation in culture, sport, art, youth and tourism is a priority for the BRICS alliance. By developing and strengthening these ties between nations, we are building a language of communication based on mutual understanding, respect and support. The dialogue of our cultures, even the dialogue of the civilizations, if I may say so, is a symbol of our desire for harmony, trust and productive interaction.

Could you discuss some of the initiatives that were presented during the meeting? What were the reactions of your colleagues from Brazil, India, China and South Africa?

Peryshkina: The experts who participated in the meetings introduced many initiatives contributing to the institutionalization of cultural ties between the BRICS countries, such as creation of the «BRICS Non-Governmental Organizations Union (Association)», establishment of the joint Fund for Grant Support for Cultural Projects and Civil Initiatives or establishment of an organization for promoting joint projects in the audiovisual market, mass media, television and Internet, promoting exhibitions of cinematic and audiovisual content.

Obviously, such ambitious projects require elaboration and can be implemented in the medium or long term. Along with this, I also found very interesting initiatives that would contribute to the development of the culture of the BRICS countries right now, such as establishment of a general Register of cultural, architectural and landscape monuments of the BRICS member states and the inclusion of the given cultural heritage sites in the World Heritage List or establishment of the BRICS Literary Prize and organization of the BRICS Literary Forum with the participation of specialists and professionals of a wide range of knowledge from the five countries, including writers, thinkers, historians, sociologists, and philosophers.

I should note that all of the initiatives proposed by the Russian side were very positively received by our BRICS partners. The proposals included in the recommendations to the BRICS leaders are the result of the consensus of all five countries – Brazil, Russia, India, China and South Africa.

What challenges are there in promoting civil society, youth and tourism exchanges as part of public diplomacy of BRICS? How did the roundtable meeting participants looked at these in practical terms?

Peryshkina: If we talk about the practical aspects in the implementation of programs and initiatives in the sphere of civil society, youth and tourism exchanges, then we are always talking about addressing three key issues: the support of governments, funding, and the capacity of implementing agencies. Where there are political will and administrative support, where the issues of co-financing are solved, where there are human potential and experience – there is guaranteed success.

What could be the best way to systematize and to combine efforts in implementing all these new initiatives and recommendations arrived at the BRICS Civil Forum? In you view, how best do you see the way forward for the Association of NGOs as part of BRICS?

Peryshkina: Indeed, the best way to consolidate the efforts of BRICS civil dialogue partners could be the creation of the BRICS NGOs Association to unite the organizations within the Alliance, acquire new opportunities for providing effective cooperation, organize and coordinate multilateral activities, create a unified base of BRICS NGOs. Similar to any institutional process, the creation of an association should be a step-by-step process. In my opinion, the first step should be the creation of a steering committee of the BRICS civil society forum. This committee would not only ensure the continuity of the agenda from presidency to presidency, but also develop a mechanism for evaluating and monitoring the implementation of NGOs recommendations to the BRICS leaders.