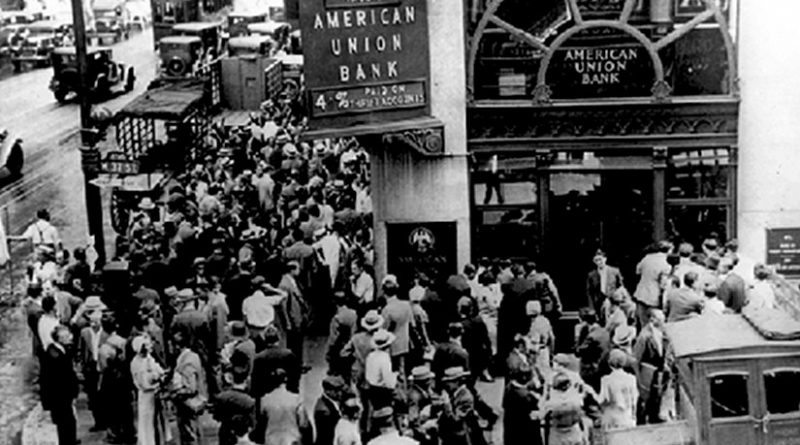 Deposit insurance in the U.S. is backed by federal taxpayers and administered by the Federal Deposit Insurance Corporation (FDIC). As of 2016, the FDIC guaranteed approximately $7 trillion in deposits, backed by an insurance fund of $75 billion (a reserve ratio of just over 1 percent).[1]

Installed under the Banking Act of 1933, deposit insurance was a temporary policy and the FDIC was authorized to pay a maximum of $2,500 to depositors of failed, insured banks, equal to around $46,000 in 2016 dollars.[2] Coverage soon became permanent and grew over time. After the U.S. implemented deposit insurance, many other countries imitated it. By the 1990s, the International Monetary Fund, the European Union, and the World Bank had all endorsed deposit insurance. As a result of external and internal political pressures favoring its adoption, deposit insurance has spread throughout the world.

At present, the coverage limit for deposit insurance in the U.S. is $250,000 per account; in practice, however, that limit is regularly surpassed.[3] Furthermore, bills currently under discussion in the U.S. Congress could further expand use of FDIC insurance.[4]

Expanded use of government-backed deposit insurance has far-reaching policy implications even outside the U.S. Despite deposit insurance’s overwhelming political support, a large body of empirical literature suggests that the moral-hazard costs of deposit insurance have outweighed its liquidity-risk-reduction benefits.[5] These papers show that deposit insurance is among the most important contributors to the unprecedented waves of banking crises that have crashed over the world during the past four decades. The separation between policy recommendations and economic studies prompts questions about whether empirical studies may have failed to properly control for the other contributing influences that produced both the rise of deposit insurance and banking instability.

In our research, we examine a near ideal environment from the standpoint of identification: the state deposit insurance experiments of the early 20th century in the United States.

A couple states installed liability insurance funds during the antebellum period but none of these lasted beyond the Civil War. In the early 1900s, another wave of laws was passed expanding deposit insurance. During this wave, eight states passed deposit insurance laws from 1907 to 1917. Each law created a non-state guaranteed fund that would be used to reimburse any deposits in the event of a failed member bank. As the laws only covered state-chartered commercial banks in their respective states, these laws thus installed deposit insurance over unit state-chartered commercial banks operating parallel to the uninsured system of national banks[6] within the same states and to uninsured state and national banks operating in bordering non–deposit insurance states.

The framework for this present study mitigates the omitted variable problem embodied in cross-country studies by allowing for the study of insured and uninsured depository institutions operating at the same time and place as well as under the same legal system and currency. We employ detailed information about the locations, economic environments, and bank-level balance sheet characteristics of insured and uninsured banks for many states and years. Specifically, we implement a “difference-in-difference-in-difference” model that measures the effect of deposit insurance on insured banks controlling both for the change in uninsured banks in the deposit insurance states and for the change of uninsured banks in other states.

Moreover, because several of the laws were passed in the same year but implemented in different subsequent years, we are able to use placebo tests to determine whether a region-specific economic shock was responsible for both changes in banks’ and depositors’ behavior and the passage of deposit insurance, or, alternatively, whether changes in behavior were the consequence of deposit insurance.

Following the theoretical and empirical evidence of risk intolerance in uninsured deposit markets, we develop and test three hypotheses.

We find conclusive evidence that deposit insurance caused risk to increase in the banking system by removing the market discipline that had been constraining uninsured banks’ decision making. Depositors applied strict market discipline on uninsured banks when evaluating whether to place their deposits in those banks, but seemingly ignored the financial soundness of insured banks. Thus, insured banks were able to use the promise of insurance to compete away deposits from uninsured banks. Because they were constrained only by regulatory standards—such as a minimum capital-to-deposits ratio, a minimum reserves-to-deposit ratio, and in some cases, a maximum interest rate paid on deposits—which often proved inadequate to prevent insolvency, insured banks raised their loans, reduced their cash reserves, and kept their capital ratios close to the regulatory minimum.

Insured banks were seemingly betting on the permanence of agricultural price increases that had occurred during World War I, while depositors believed in the insurance systems’ ability to protect them. Deposits flowed most strongly into insured banks located in counties where the price rises had the biggest effect. Indeed, variation across counties in the extent to which they produced commodities that appreciated during the World War I agricultural price boom explains between one-third and two-thirds of the observed effects of deposit insurance on deposit growth, loan growth, and increased risk-taking by insured banks.

Deposit Insurance May Have Increased Losses in the 1920s

As banks most often used deposits to fund new loans, the implementation of deposit insurance allowed an asset price bubble to quickly form. When prices reversed in the early 1920s, the insured banking systems collapsed and left depositors with losses. The protection offered by the deposit insurance funds thus did not prevent a collapse from occurring and might even have increased the size of losses. Indeed, deposit insurance states saw declines in their state-chartered commercial banking systems throughout the 1920s, suggesting continued mistrust of the banking industry.

The history of deposit insurance in the U.S. and across the globe has been a process of increasing systemic risk in the name of reducing systemic liquidity risk. The regulation might have been sufficient when risk-taking opportunities were low, but failed dramatically when they became abundant. Pushed for by small unit banks and farmers, deposit insurance in the U.S. was essentially a subsidy to rural agricultural banks and a concession to farmers that feared large branch banks would use any funds extracted from their communities to make loans in the large cities.

As such, the deeper lesson of the American deposit insurance history is that economic models which attempt to explain the attraction of deposit insurance using efficiency arguments are less relevant than political models that explain it through interest groups and subsidies. Even the recent wave of modern legislation was seen to a greater extent in countries with a more contestable political system and larger and more under-capitalized banks. U.S. policymakers should view FDIC coverage expansion through this lens.

About the authors:
*Charles W. Calomiris is the Henry Kaufman Professor of Financial Institutions at Columbia Business School, and Matthew Jaremski is Assistant Professor of Economics at Colgate University.

Notes:
[1] General statistics on the FDIC’s deposit insurance fund can be found, on a quarterly basis, in the FDIC Quarterly, https://www.fdic.gov/bank/analytical/quarterly/ (accessed January 19, 2017).

[6] That is, unit banks chartered by the Comptroller of the Currency.