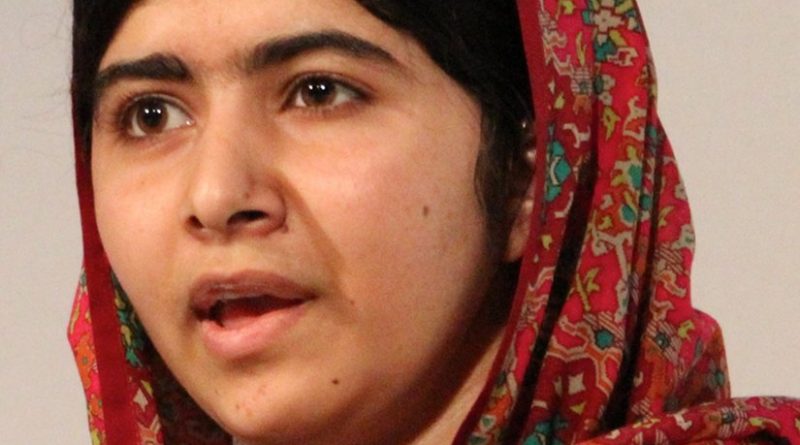 Is Malala Yousofzai a Western foil that masks the ongoing holocaust of children in the Islamic world? This analysis provides a counter-narrative to the mainstream perspective and is dedicated to Ali Mohammed al-Nimr who faces imminent decapitation and crucifixion in Saudi Arabia.

I was one amongst those who were outraged by the shooting of Malala Yousofzai on Oct 9, 2012.

However, my opinions regarding her putative education jihad, her alleged single-handed campaigns against the Taliban, and even the alleged shooting incidence itself rapidly changed when the subsequent lionization process reeked of a pre-planned Western media agitprop. Her appearances before prime ministers, presidents and the UN reminded me of the lachrymal testimony of Nurse Nayirah before the US Congressional Human Rights Caucus on October 10, 1990. Many members of the US Congress voted to wage war against Iraq after this fraudulent, heart-wrenching testimony.

Almost 12 years later to the day, it was time for another child-hero to emerge from the Islamic world to advance Western geopolitics. Overnight, Malala Yousofzai became the most famous schoolgirl in the world, and an inspiration to millions of schoolgirls who had never heard of her before.

The Malala mania, in fact, ran in parallel with two other gender-related media agitations of the day –Pussy riot and LGBT rights. Scrupulous efforts were however taken by writers and news anchors to avoid mentioning all three viral deliriums in the same breath, interview or column. Malala’s future role was set. The message of Islam-based female rights – as defined by the more enlightened hemisphere – must not be tainted with the sexually-charged activism of the same schizoid West. This tacit delineation was strictly adhered to by politicians, celebrities and the media, despite momentary blips like Madonna’s strip dedication to Malala. That script was solely reserved for Pussy Riot and the LGBT movement.

All three could be headlined in separate stories on the same front page but rarely, if ever, in the same commentary. One only need to peruse through the hardcopy archives and internet screenshots of front-pages of the period from October 2012 to Dec 2014 to check this out.

Not even US President Barack Obama – who constantly invoked Pussy Riot, LGBT rights and Malala in his human rights spiels would mix the former two with the latter. Irshad Manji, the self-styled Islamist lesbian, attempted to blur the pre-set boundaries through her own tireless advocacy. The favour and recognition bestowed by Manji, as far as I know, was never returned by the Malala side. At least not publicly anyway!

The sheer believe in Malala’s transformative powers, and the gravy trains it promised to the barnacles of human rights activism were too good to be missed.

While Malala momentarily exuded the false promise of challenging a deeply patriarchal Islamic world, Pussy Riot and the LGBT lobby were entrusted to whip up “global fury” against Russia and those still unaligned to the United States. Sanctions and aid cut-offs were threatened against nations like Kyrgyzstan for its hostility towards the West’s LGBT agenda, despite Bishkek’s commendable track record on girls’ education and women’s rights. Islamic states that maintained stringent Sharia laws, entailing the death penalty for homosexuality and which curtailed basic female rights like no other society or civilization, were thoroughly exempted.

One cannot help but wonder how many benchmarks were exempted or lowered, as well double-standards applied, to enable Malala Yousofzai to bag the Nobel Peace Prize in 2014.

The West needed a moral sheen, an icon of unimpeachable media-manufactured attributes even while it plotted the terminal ruination of the Islamic world; one that would afflict children from Egypt to Libya to Syria and Yemen. Malala’s role was subtly elevated from a girls’ education rights activist to that of a living embodiment of “true Islam.” She held the promise of challenging the many “preconceptions” over the faith. Her messages and well-publicized itinerary however were primarily directed at non-Muslim audiences in the Western hemisphere, stretching from the Caribbean islands to Nigeria to the citadels of Western power.

Did the West really expect a re-engineered, feminized and – ultimately—West-friendly Islam to emerge from a teenager whose naiveté and ignorance couldn’t be masked by the copious hagiographies disgorged from a global public relations machinery?

In one telling interview during the height of a particularly juvenile hashtag campaign, Malala reminded the gullible “that the word Islam means ‘peace’.” To rub the fallacy in, she preached that the 21st century Mujahideen had “not studied Islam yet, they have not studied the Holy Quran yet and they should go and learn Islam.”

Someone should have interjected to remind Malala that Islam was universally acknowledged to mean “submission” (“to the will of Allah” as Islamic scholars assert). According to these scholars, such submission was intended to bring divine order to a Bedouin culture wrecked by perennial internecine violence. A codex of strict laws (Sharia) perpetuated such an order. The viral Malala juggernaut however ensured that no questions would be asked, and no error would be corrected.

The Obamesque meme was now becoming familiar. It relied on social media contagion, little in terms of either knowledge or track record and plenty of virally-relayed emotions. Like her Nobel Peace prize-winning predecessor and personal hero in the White House, it offered “hope and change” without the need to deliver them. (Barack Obama is now busily rebranding Ahmed the Clockmaker as a child prodigy).

The definition of “change”, a constant theme of the Malala brigade, was once inadvertently spelt out by her father and compatriot activist Ziauddin Yousofzai:

“Any change starts from the heart, but it takes determination to see that change…Already change is happening in the Swat Valley of Pakistan” where they were living when she was shot in 2012. “Many have named their daughters after Malala.”

That is it! “Change” can be empirically actualized from a symbolic mass naming. The reality is, the plight of Muslim girls from Morocco to Pakistan have taken a turn for the worse since the Malala miracle began. Similarly, one would naturally doubt that naming more American kids after the Nobel Peace Prize-winning Barrack Obama would bring a “change you can believe in” anywhere in the United States.

Malala Patterns You Can Believe In

Whether it is a Boko Haram kidnapping or the carnage in Syria, Malala Yusofzai has the habit of making a belated entry to steal the thunder. There are two core messages that accompany such visits.

The superficiality of this ongoing spectacle did not matter. An organized Western media ensured that every hackneyed Malala regurgitation would be rebranded as a refreshing new burp of enlightenment. This was possible due to two other patterns that accompanied the Malala miracle:

The Malala story is riddled with paradoxes, discrepancies and deficits, especially for someone who has acquired near-mythological status. The following is a sampling for brevity’s sake:

For that matter, never once had Malala spoken out against the systemic repression of girls and women in Saudi Arabia. But then, the Saudis do prize the virginal virtues of its girls above everything else – even to the point of consigning them to a fiery death. When a fire broke out at a girls’ hostel on March 11, 2002, the Saudi religious police forced the girls back into a blazing inferno because they were not wearing Islamic headscarves and black robes in their rush to escape. About 12 years later, male paramedics were prevented from entering a women’s-only campus to assist a student who suffered a heart attack and later died.

This dress and gender segregationist code is ironically reinforced by the Yousofzai family. Ziauddin Yousofzai had prohibited journalists from photographing his wife until after the lucrative post-shooting period of Malala’s life. For that matter, have you ever seen Malala in sporting attire? Playing tennis or badminton in the company of boys or even girls her age? Aren’t such extracurricular activities are normal?

Has the youngest Nobel laureate in history brought any real hope or change to the world today? Isn’t it obvious that the West has pre-emptively exculpated itself of the paedocidium of millions of children in Muslims lands by promoting a much celebrated girl who promises nothing more than “hope and change”? Tens of thousands of children have already died in Syria, Iraq and Libya while Malala provides the media-cognitive counter-balance.

Profiting from the latest tragedy: Syria

From symbolically carrying a Syrian child to the Jordanian border a la Tracy Lime in Wag the Dog, Malala has belatedly returned to the spotlight. The child tragedy theme was disinterred during her recent speech at the UN, followed by a meeting with German Chancellor Angela Merkel.

This time, the usurped symbol was Aylan Kurdi, whose much photographed body on a Turkish coast prompted Malala to declare that the world had “lost humanity.” In the Middle Eastern context, the world had long lost its humanity before Malala was born, when Madeline Albright declared the Western-imposed deaths of 500,000 Iraqi children as being “worth it”. The world no longer had any humanity when Iraqi Christian children were given a choice of converting to Islam or face beheading by Islamic Caliphate savages.The children chose their “love for Jesus” right till the very end. Hardly anyone can recall their names. No memorial has been erected to honour their bravery.

All we need is Malala.

The parallels between the Aylan Kurdi and Malala Yousofzai sagas are striking. Is it coincidental that photographs of Kurdi were used for geopolitical ends by Western leaders, especially to pacify their wary citizens into accepting the current immigrant influx into Europe? Is it coincidental that there was a father involved in each case to capitalize on a child’s life?

When these usual suspects raise a new moral issue, it may be advisable to study the prevailing counter-narrative. This time the Western public was not willing to accept a Malala redux — hook, line and stinker. Reports emerged of the stage managing of Kurdi’s body while his father was exposed as a callous people smuggler who charged fellow refugees $10,000 for a trip that cost the lives of other children as well. Abdullah Kurdi’s dream of a Western-manufactured agitprop to fame and fortune is dashed forever.

But the facts matter little when you have the West, its leaders and its media behind your back.

According to an AFP report: The youngest-ever Nobel Peace Prize winner took two days off from high school to highlight the Syrian crisis to the uninformed leaders at the United Nations. “I never miss a school day unless it’s for a good cause and it really brings change,” Malala reminded Angela Merkel.

And what “real change” may that be? Changing the demographics of Europe and reducing many European cities into another Birmingham? Isn’t it a paradox that Muslim refugees in the West attempt to recreate the very societies they fled from through the self-entrenchment of “true Islam” as promoted by the West?

In this sense, Malala is no different from her co-religionists in Birmingham who attempted to Islamize the curricula and nature of the city’s schools into replicas of madrassas in Swat and Peshawar.

This trend will likely continue throughout the West and it’s a coming change you can surely believe in. How this will end will be the subject of another upcoming analysis. Stay tuned.

*Mathew Maavak is a journalist based in Malaysia. Contact him at [email protected]