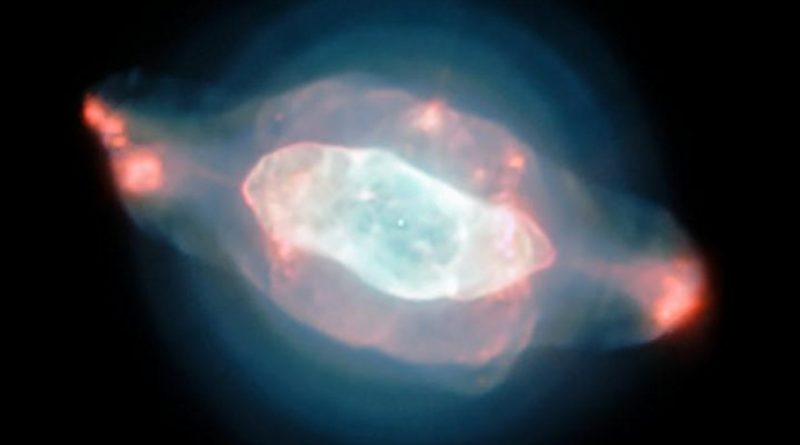 The spectacular planetary nebula NGC 7009, or the Saturn Nebula, emerges from the darkness like a series of oddly-shaped bubbles, lit up in glorious pinks and blues. This colorful image was captured by the powerful MUSE instrument on ESO's Very Large Telescope (VLT), as part of a study which mapped the dust inside a planetary nebula for the first time. Credit: ESO/J. Walsh

The Saturn Nebula is located approximately 5000 light years away in the constellation of Aquarius (The Water Bearer). Its name derives from its odd shape, which resembles everyone’s favourite ringed planet seen edge-on.

But in fact, planetary nebulae have nothing to do with planets. The Saturn Nebula was originally a low-mass star, which expanded into a red giant at the end of its life and began to shed its outer layers. This material was blown out by strong stellar winds and energised by ultraviolet radiation from the hot stellar core left behind, creating a circumstellar nebula of dust and brightly-coloured hot gas. At the heart of the Saturn Nebula lies the doomed star, visible in this image, which is in the process of becoming a white dwarf [1].

In order to better understand how planetary nebulae are moulded into such odd shapes, an international team of astronomers led by Jeremy Walsh from ESO used the Multi Unit Spectroscopic Explorer to peer inside the dusty veils of the Saturn Nebula. MUSE is an instrument installed on one of the four Unit Telescopes of the Very Large Telescope at ESO’s Paranal Observatory in Chile. It is so powerful because it doesn’t just create an image, but also gathers information about the spectrum — or range of colours — of the light from the object at each point in the image.

The team used MUSE to produce the first detailed optical maps of the gas and dust distributed throughout a planetary nebula [2]. The resulting image of the Saturn Nebula reveals many intricate structures, including an elliptical inner shell, an outer shell, and a halo. It also shows two previously imaged streams extending from either end of the nebula’s long axis, ending in bright ansae (Latin for “handles”).

Intriguingly, the team also found a wave-like feature in the dust, which is not yet fully understood. Dust is distributed throughout the nebula, but there is a significant drop in the amount of dust at the rim of the inner shell, where it seems that it is being destroyed. There are several potential mechanisms for this destruction. The inner shell is essentially an expanding shock wave, so it may be smashing into the dust grains and obliterating them, or producing an extra heating effect that evaporates the dust.

Mapping the gas and dust structures within planetary nebulae will aid in understanding their role in the lives and deaths of low mass stars, and it will also help astronomers understand how planetary nebulae acquire their strange and complex shapes.

But MUSE’s capabilities extend far beyond planetary nebulae. This sensitive instrument can also study the formation of stars and galaxies in the early Universe, as well as map the dark matter distribution in galaxy clusters in the nearby Universe. MUSE has also created the first 3D map of the Pillars of Creation in the Eagle Nebula ( http://www.eso.org/public/news/eso1518/ ) and imaged a spectacular cosmic crash in a nearby galaxy (http://www.eso.org/public/news/eso1437/ ).

[1] Planetary nebulae are generally short-lived; the Saturn Nebula will last only a few tens of thousands of years before expanding and cooling to such an extent that it becomes invisible to us. The central star will then fade as it becomes a hot white dwarf.

[2] The NASA/ESA Hubble Space Telescope has previously provided a spectacular image (https://www.spacetelescope.org/images/opo9738g/ ) of the Saturn Nebula — but, unlike MUSE, it cannot reveal the spectrum at each point over the whole nebula.