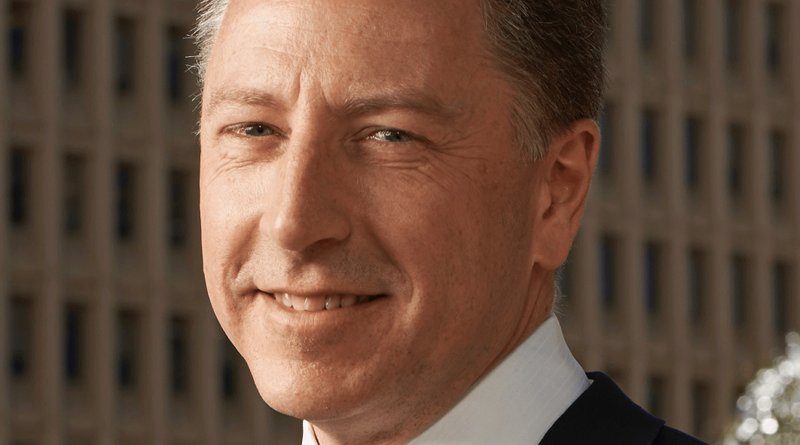 (RFE/RL) — Kurt Volker has resigned as the special U.S. envoy to Ukraine, days after he became embroiled in a controversy over President Donald Trump’s decision to withhold military aid to Kyiv.

Arizona State University, for which Volker directs a think tank, on September 27 confirmed earlier reports by CNN, The New York Times, and other news outlets that Volker was stepping down.

The White House and State Department have not commented. Volker did not immediately respond to an e-mail request for comment by RFE/RL.

Volker’s name was mentioned in a whistle-blower complaint expressing alarm over Trump’s dealings with Ukraine and the decision to hold up military aid to the country that has been battling Russia-backed separatists in the eastern portion of the country since 2014.

Earlier in the day, the House of Representatives said it was issuing a subpoena to Secretary of State Mike Pompeo to hand over documents pertaining to the impeachment inquiry into Trump’s July 25 phone call with Ukrainian President Volodymyr Zelenskiy that has become the heart of the probe.

The House said it was also looking to speak with five State Department senior officials, including Volker, who works on a voluntary, unpaid basis.

The House is also looking to speak to Marie Yovanovitch, the former U.S. ambassador to Kyiv who was suddenly recalled earlier this year after an apparent dispute with the administration over policy toward Ukraine.

Volker was in contact with Trump’s private lawyer, Rudy Giuliani, who has admitted to back-door contacts with Ukrainian officials.

Giuliani’s actions have come under the scrutiny of the House and have sparked alarm within the U.S. intelligence community that resulted in a whistle-blower complaint.

Trump and Giuliani have denied any wrongdoing in the matter.

“Volker was an extraordinarily able diplomat doing essential work,” said Herbst, who served in Kyiv from 2003-06 and also served as ambassador to Uzbekistan in 2000-03.

“He was pushing for a realistic end to the Kremlin’s war on Ukraine on terms that did not cave in to Moscow’s aggression,” he said.

He added that he did not think Volker’s exit would necessarily lead to a change in U.S. policy, “but he was an energetic voice which we’ll be missing.”

Volker, Washington’s NATO ambassador under the previous two U.S. administrations, was appointed in July 2017 by then-Secretary of State Rex Tillerson as the special envoy for war-torn Ukraine.

As part of the role, Volker was tasked with coordinating “all State Department efforts to bring a resolution to the conflict created when Russia invaded Crimea and later eastern Ukraine,” officials said at the time.

He now serves as executive director of the Washington-based McCain Institute, a think tank named after late Republican Senator John McCain of Arizona and operated in cooperation with Arizona State University.

The resignation was first reported by the student newspaper at the university.