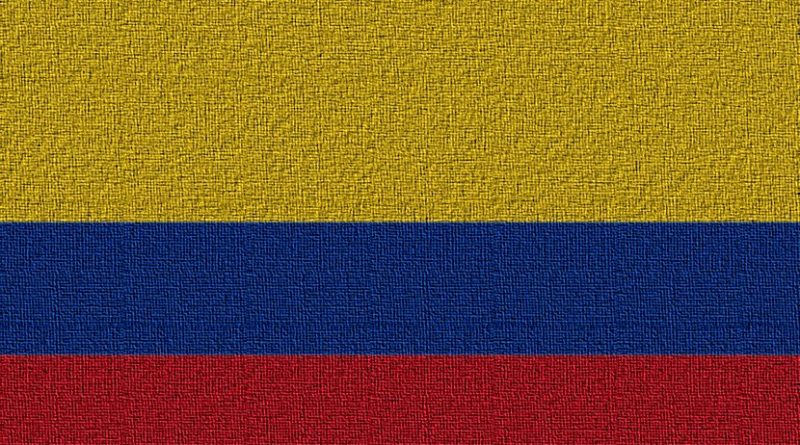 On 21 September, 2020, – World Peace Day – diverse sectors of the Colombian society held protests throughout the country, resulting in 142 actions including in the cities of Bogotá, Medellín, and Cali. In response to these demonstrations, the Colombian state unabashedly used its repressive power. At least 11 people were injured and 13 others were detained by the Colombian security forces. In Bogota, the National Police’s Mobile Anti-Riot Squad (ESMAD) injured several young people after throwing a stun bomb.

Present-day mobilizations in Colombia have been triggered primarily by police brutality. On September 9, 2020, Javier Ordóñez, a 46-year old aeronautical engineer, lawyer, and father of two, was pinned to ground by two police officers in Bogota and repeatedly tased with a stun gun as he begged “Please, no more, I can’t breathe”. When Ordonez was transferred to the hospital after this unprecedented show of benumbing brutality, he was pronounced dead. Ordonez was barbarically killed by the police because he was found drinking alcohol in the street with others, in violation of social distancing rules designed to curb the spread of the Coronavirus. The response of the police officers to this violation was patently disproportionate. Before the officers attacked him, Ordonez had appealed “to his right to appear before the appropriate authorities if he had committed any illegal act.” With his last words, Ordonez had further implored, “Give me the fine.” Uninterested in any legal niceties, the Colombian police cold-bloodedly murdered Ordonez in the street. When Colombians protested against the murder of Ordonez, they encountered police repression which left 14 people dead and hundreds injured in Bogota.

This latest act of police brutality is not new. During the anti-neoliberal protests of 2019, Colombia had police violence of a similar scale. On 25 November, 2019, Colombia’s riot police killed Dilan Mauricio Cruz Medina, an 18-year-old protester. He was struck in the head by a projectile fired by riot police while participating in popular protests against the increasingly unpopular president, Ivan Duque, and his neoliberal government. The killing of Cruz was preceded by continued state violence where the ESMAD shot people at point-blank range with tear gas canisters, kicked people in the face and released tear gas on peaceful demonstrators. On 21 November, 2019, for instance, police officers had hit people, smashed windows and fired shots in the middle of the street in the Policarpa neighborhood in Bogotá. Police also threatened people living in this neighborhood with weapons in hand, and according to Lobsang Parra, a sociologist at the Universidad Nacional, the police “were showing their weapons and would point them at the windows where they saw people, as if to scare them and keep them from going out in the street.”

The phenomenon of police brutality in Colombia is overtly linked to US imperialism which has heavily militarized the country and initiated a regime of violence geared towards capital accumulation. With the help of this regime of violence, anti-imperialist social movements have been coercively halted and the dominance of the Washington oligarchy has been maintained. The institution of this regime of violence can be traced back to the history of the FARC which rapidly built powerful bases of counter-hegemony and thus, necessitated an American military intervention.

FARC originated from PCC i.e. the Colombian Communist Party. PCC was accredited in 1930 and was radically different from the two dominant political ideologies followed by Conservatives and Liberals. It advocated the formation of peasant republics and self-defense communities oriented towards the construction of alternative communities. PCC called for the simultaneous building of peasant leagues in the rural regions and popular fronts of political mobilization in the urban areas. This was an early effort to build cross-geographical class solidarities and expand Communist ideology to different regions. The party began supporting rural militancy from the 1920s onward in response to landholder-sanctioned violence and blood-tainted capital accumulation. It organized seizures of land, strikes, protests, and established self-defense groups in the rural regions. PCC’s membership was predominantly rural with more than 48% of the members being identified as peasants at the Tenth Congress of Party held in 1966. Being a militant rural party, PCC involved itself almost immediately in the struggles over Indian communal lands, the rights of tenant farmers, and public land claims. All this was part of the fundamental process of re-constituting the social relations of production and at all times, PCC’s activities expressed explicit class content. It was due to this explicit espousal of the doctrines of class struggle that the PCC-established communist communities were attacked by Liberals and state forces who saw in PCC’s ideology a radical threat to their bourgeoisie order.

FARC emerged out of the rural militancy of PCC on 27 May, 1964, as traditional channels of opposition were abruptly closed by the ruling elites. Between 1948 and 1958, Colombia was the scene of one of the most intense and protracted instances of widespread violence in the twentieth century. In this period, there was a civil war called “The Violence” between Liberal and Conservative parties which took 200,000 lives. In order to bring an end to civil war, the Conservatives and Liberals made a political pact in 1958, known as the National Front which established that the presidency would alternate between the two parties for a period of 16 years and all positions in the three branches of government throughout the country would be distributed evenly between them. Despite this, violence continued until 1966. The National Front barred the PCC from conventional political process in 1955 and thus, established essentially a two party dominance. The National Front helped in the alternation of power between the aligned sections of the Colombian Conservative and Liberal elite while strengthening the Colombian armed forces to suppress popular reforms. After the civil war, capital accumulation consolidated, agri-business interests grew stronger and land concentration increased.

Despite rising violence and growing dominance of capitalism, PCC continued to organize peasant self-defense collectives to fight against the exploitative social relations. PCC solidly organized defense-based peasant collectives which attempted to materially support the construction of communist communities. In these areas where the revolutionary communities were located, PCC applied mechanisms of collective decision making and participatory governance. The basic idea behind the creation of these areas was to guarantee the objective security needed to implement radical measures and construct an alternative to capitalism. As a direct result of their effectiveness, the self-defense communities were seen as a threat to the existing order and Conservative Party Senators termed those areas as ‘independent republics’ adhering to politics from Soviet Union instead of the Colombian constitution. Consequently, a plan of aggression against these zones began to be elaborated in 1957 which would involve direct military action. This plan took place on 27, May 1964 with the actualization of “Operation Marquetalia”. A series of heavily US-supported military operations were carried out by the Colombian state consisting of aerial bombardments and a 20,000 ground troop offensive against the settlements in the Marquetalia region in the southern part of the Departments of Tolima, Huila and Cauca. Colombian Air and Armed Forces also utilized US-supplied napalm during the campaign to destroy the Marquetalia valley. In Operation Marquetalia, a military attack aimed at killing the PCC leader Manuel Marulanda Vélez was also envisaged. While Operation Marquetalia devastated the region, Marulanda survived and the entire community of 4,000 was able to flee due to the organizational preparation of the guerrillas.

As is evident from Operation Marquetalia, USA militarily assisted the Colombian state whenever it saw a threat to its imperialist dominance. Since then, its imperialist strategy has evolved considerably and now it uses the pretext of counter-insurgency and drug war to militarize Colombia and suppress popular movements. Plan Colombia, a $10 billion aid program funded by USA and primarily managed by State Department’s International Narcotics Control program, has proved to be a major method through which the new US imperialist strategy has been carried out.

Out of the $10 billion allocated for Plan Colombia, 57.5% was devoted to counter-narcotics operations and the prevention of organized crime, emphasizing the purely military nature of the US aid program. Since Plan Colombia’s initiation, violence in Colombia has increased significantly: out of 7 million people displaced in Colombia, 4 million were displaced beginning from 2000; since the plan’s inception, more than 1000 trade unionists, more 370 journalists and more than 400 human rights defenders have been murdered. Between 2001 and 2009, nearly half a million women were subjected to sexual violence. From 2000 to 2010, more than 5700 civilians were killed by state security forces.

Plan Colombia’s disastrous results are expected because militarization is closely tied to increased aggressions. Heavy weaponry, combat training, and tactical organization that come with militarization translate into increased disruptive capacity. This enlarged combative capacity transforms into the use excessive force against civilians. For instance, levels of violence will increase as law enforcement moves away from traditional weapons like pistols closer to military weapon such as submachine guns and assault rifles. With the establishment of Plan Colombia, the disruptive capacity of various security forces exponentially increased as military assistance poured in from the US: Colombia received $30 million in 1995, $98 million in 1998 and $294 million in 1999. In total, from 1999 to 2002, the United States gave Colombia $2.04 billion in aid, 81% of which was for guns.

As military aid steadily flowed from USA, the police architecture of Colombia became bellicose and militaristic. In 1998, President Andrés Pastrana created the First Battalion Against Drug-Trafficking which later mutated into the Army’s Counternarcotics Brigade, responsible for aerial and manual eradication operations, drug seizures, and the destruction of laboratories. By the time Plan Colombia was adopted in 1999, the number of domestic operations to address drug trafficking reached 977 in 2005. Militarization of policing accelerated in 2011 when the Fourteenth Directive from the Ministry of National Defense involved the military in the fight against organized crime through joint operations with the National Police. Operation Troy, for example, involved 1,000 members of the National Police and 3,000 soldiers in the Caucasia area. Presently, 300,000 members of the armed forces work in citizen security activities throughout the country, of which 60,000 have been deployed under Plan Victoria to occupy the former FARC zones of influence.

Colombia’s National Police Corps (CNP), founded in 1891, also serves as a good example of the effects of Plan Colombia. CNP is a centralized and militarized police force assisting the armed forces in counter-insurgency operations. Initially, the deployment of CNP was geographically restricted to rural areas. Later, it developed into an urban-focused crime-fighting and investigation unit. USA strengthened the militarization of CNP by pouring some $850 million into counter-narcotics assistance and giving the CNP better military and surveillance equipment than the armed forces.

The Need for Anti-imperialist Administrations

As protests go on in Colombia, the necessity of a socialist administration, opposed to USA’s imperialism, is becoming increasingly clear. Through its security aid, the US has military repressed social movements which challenge the dynamics of capitalism and imperialism. In the last few years, the hubristic American empire has intensified its military onslaught against the anti-neoliberal activism of Latin America. Between 2000 and 2016, the U.S. Department of Defense provided Latin American and the Caribbean over US$5.5 billion in security aid. This aid is tied to military equipments—such as Blackhawk and Apache helicopters—provided as assistance for anti-drug efforts. The number of special operations forces training missions to Latin America tripled between 2007 and 2014, and USA works with the security forces of all countries in Latin America except Cuba, Venezuela, and Bolivia where socialist governments are or have been in power. In the contemporary period, we need more anti-imperialist governments in Latin America which can prevent USA from militarily ravaging the continent.

Home » Police Brutality And US Imperialism In Colombia – OpEd