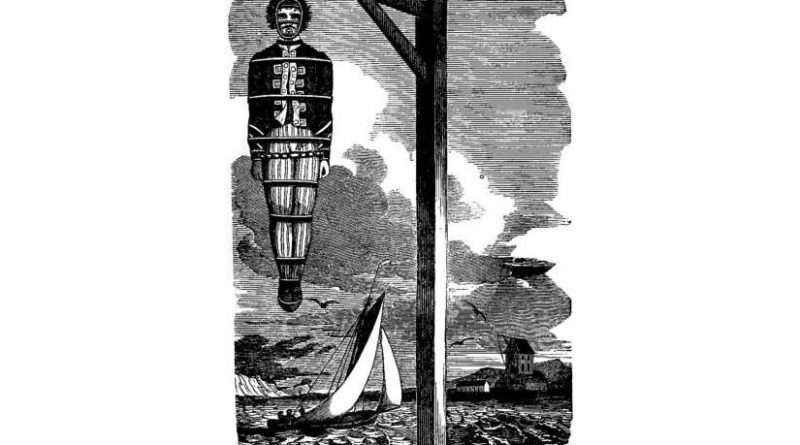 Captain Kidd, who was tried and executed for piracy, hanging in chains. Source: The Pirates Own Book, by Charles Ellms, Wikipedia Commons.

Today, a typical Halloween night might include people dressing up as ghosts, ghouls and a creepy clown or two in order to frighten passers-by.

But some of the disturbing practices from history might be more harrowing than a modern audience is used to encountering.

Professor Sarah Tarlow from the University of Leicester School of Archaeology and Ancient History has written an article for Think: Leicester, the University’s platform for independent academic opinion, highlighting the historical practice of gibbeting that evoked fear in the hearts of the public of the eighteenth century.

A post-mortem punishment, gibbeting involved enclosing the corpses of criminals in cages designed to fit closely around the body, to keep it upright and person-shaped, where they would be displayed in public locations for passers-by to witness.

“Methods of gibbeting and features of the gibbet accentuated the unsettling and disturbing aspects of the gibbeted body,” Professor Tarlow said. “Though a dead body, it remains upright and above ground. Its visibility was enhanced by locating the gibbet in a prominent place, and as close as possible to the scene of crime.

“Though a dead body, it hung above the road and seemed to watch people coming past. Letters, diaries, petitions, and common folktales tell of people’s reluctance to pass by a gibbet, especially at night,” Professor Tarlow said.

Professor Tarlow goes on to discuss how modern Halloween paraphernalia often portrays the gibbet in an inaccurate way, using an example of a toy depicting a semi-skeletal figure gripping the bars of a cage and croaking ‘let me out’.

“For a start, in the peak period of gibbeting in Britain – the eighteenth century – nobody was gibbeted alive. Putting a body in a gibbet – or ‘hanging in chains’ – as it was known at the time – was exclusively a post-mortem punishment,” Professor Tarlow said.

“The shape of this pretend gibbet is totally wrong. Rather than being an oversized birdcage or a kind of dangling cell, actual gibbet cages were designed to fit closely around the body, to keep it upright and person-shaped, not for a living person to sit in and harangue passers-by.”

While the government at the time hoped that gibbeting would deter criminals by graphically demonstrating the consequences of crimes, Professor Tarlow suggests that creepy nastiness rather than moral reflection was the main consequence of the horrific practice.